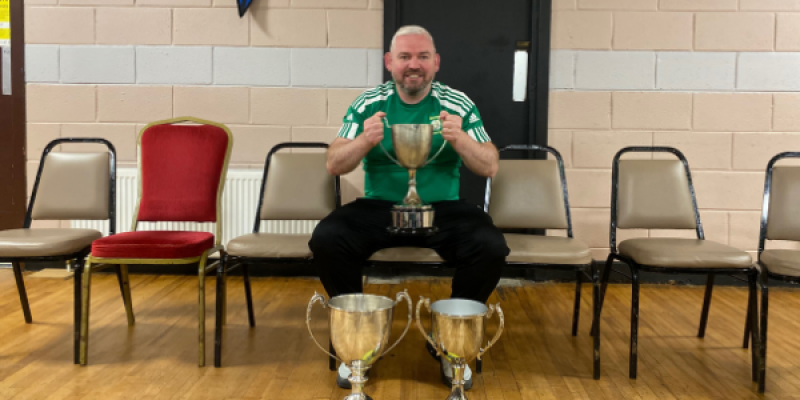 Jason Gibson with the three trophies won by his Bonagee United side.

When Jason Gibson was named as the new manager at Bonagee United four years ago, the expectation levels weren’t so high.

Since the advent of the Ulster Senior League in 1986, a League Cup in 2003 and the Knockalla Caravans Cup in 2012 were the sum total of Bonagee’s lot.

In the three seasons under Gibson’s watch, Bonagee have added five cups to their roll of honour.

Having won the Knockalla and League Cups in the previous two campaigns, Bonagee bagged a Cup treble in 2021/22, Tuesday’s 3-2 win over Monaghan in the USL League Cup final completing the term.

“We wanted the three We probably didn’t think we’d get over the line in all three and this one proved to bet really, really tough. We knew that would be the case. Finals are all about winning and we’re delighted to get over the line.”

Bonagee ran Cockhill - the nine-in-a-row USL champions - close, but not close enough in the League.

Gibson’s men will be in the FAI Senior Cup draw next month and it won’t be long before another season will get underway.

The former Lagan Harps and Swilly Rovers boss will look to tweak his squad, but there won’t be wholesale changes required around Dry Arch Park.

“We’ll plan to add to the group in the summer,” Gibson said.

“We have the senior cup at the end of July so they won’t have that long off. There’ll always be a turnover in a squad, but we have a good dressing room and a good environment and we’re at the best club in the county. If you’re playing at this level, there is no better club to be at.”

On Tuesday night in Gortakeegan, Tony McNamee popped up with the winner after two Micheál Doherty goals were cancelled out by Monaghan.

Gibson said: “We hoped with the quality we have and the big game players that we’d be able to get the job done. Big game players win big games and that’s the way it was.

“Obviously, you start out to win the league and we had a cracking season in the League. We only had two defeats and we ran Cockhill close. We’ll regroup and go at it again. The lads have played nearly ever match possible and that’ll stand to them.”