‘Hugely disappointing week after week to concede goals from mistakes’

Ollie Horgan was left to, again, lament mistakes as Finn Harps were dumped out of the FAI Cup by Bohemians at Finn Park on Friday 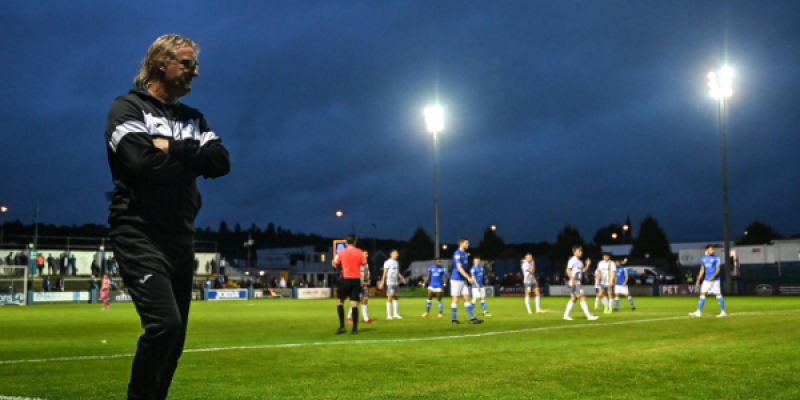 As mistakes continue to frustrate Ollie Horgan, the Finn Harps manager has called on his players not to throw the towel in.

Friday’s 3-1 defeat by Bohemians in the FAI Cup means it’s 12 games without a win for Harps.

With only two wins all season - and none since the end of April - Harps are in a real rut.

Horgan shook things up last week, but new goalkeeper James McKeown had a debut to forget with mistakes that led to goals by Josh Kerr and Junior Ogede-Uzokwe.

Declan McDaid opened the scoring and while Eric McWoods pulled one back for Harps, just after Kerr doubled the lead, Junior’s goal only three minutes into the second half copper-fastened the win for Bohs.

Finn Harps bow out of FAI Cup after Bohemians defeat

“They were very soft goals that we gave away,” Horgan lamented.

“It’s hugely disappointing week after week to concede goals from mistakes. Collectively, I’m responsible for it, along with Gavin, but they have to take responsibility individually as well and try to prepare better.

“We got back into it just before half-time and we were hoping to stay in it for the last 20 minutes and pile pressure. We never got that far.

“We had to press and push up and we didn’t concede when we were wide open. It was when we were more compact and sitting deep that we conceded. Whether that’s a lesson or not, I don’t know.”

McKeown, a former Grimsby Town goalkeeper, was given a first start while Gary Boylan, who has joined on loan from Galway United, was also handed his debut.

For McKeown, it was a nightmare opening night in the Harps shirt.

“It’s been a position, with no disrespect to others, that has cost us a few goals,” Horgan said.

“Players outfield make mistakes as well and cost us goals. You can’t just point to the last line of defence. We tried to shake it up and, please God it’ll work in the long run.

“People have to get their heads down, who didn’t start, work their way back and come back better. We need people reacting better and getting themselves into better nick, rather than doing the easy one and throw the towel at it, which I don’t think will happen.”

There has been plenty of changes at Harps in recent weeks with Rob Jones, Harry Nicolson and Liam McGing also having joined in July.

Results, though, have not yet followed.

“I don’t know what more we can do,” Horgan said.

“We tried to shake things up rather than let them stay the way they were. There is no guarantee that, by shaking it up, that we’ll get any better. We have tried and we need to get the best out of them from here to the end.”

The next fortnight is huge for Harps, who welcome Drogheda United to Finn Park on Friday before traveling to fellow relegation battlers UCD.

Horgan said: “They have beaten us and both of them have kicked on. We haven’t. I watched Drogheda in Tallaght and they drew with Shamrock Rovers. They could and should have won. They’ve kicked on and we have gone the other way.”