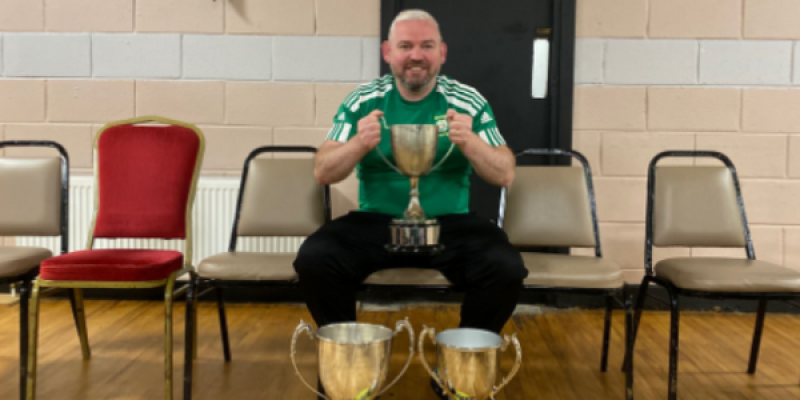 Jason Gibson with the three trophies won by his Bonagee United side last season.

In reaching the quarter-finals of the FAI Intermediate Cup - where they endured an agonising 1-0 away defeat at Rockmount United in Cork - the Dry Arch residents booked a place in the senior cup.

On Sunday, Bonagee host Pike Rovers from Limerick, last season’s FAI Junior Cup runners-up, at Dry Arch Park in the opening round of the Senior Cup.

‘Hugely disappointing week after week to concede goals from mistakes’

Ollie Horgan was left to, again, lament mistakes as Finn Harps were dumped out of the FAI Cup by Bohemians at Finn Park on Friday

“The pleasing thing was that we came out at home,” Gibson says.

“Normally in the senior cup, you want a winnable tie or a game against a big team. We’re delighted to be at home, not that this will be in any way an easy afternoon. I expect Pike to be really tough opponents.

“It is a chance for us to get to the next round, it’s a home fixture and we’ll have a strong team out

“It’s a prestigious competition, obviously, and it’s a great chance for the voluntary workers at Bonagee United the chance to show off what they have achieved off the field. The place is looking immaculate and it’s great for us to be in the big competitions and able to play the games at home.”

Bonagee will be without Jack Parke, Deano Larkin, Gareth Breslin and Daragh Ellison - the former two due to holidays with the latter pair on the injured list.

Former Finn Harps captain Packie Mailey, another who was a key cog in last season’s wheel, has indicated that his boots could be hung up, although Gibson would be keen for the Convoy man to be a part of his squad for the new Ulster Senior League season.

The fitness levels of Tony McNamee, Mark Harkin and Gareth Harkin, all of whom have been nursing injuries in recent weeks, will be assessed before the game.

“We’ll have a strong side and there are certainly no excuses,” Gibson said.

“It’s not ideal with us being out of season and it has been difficult to get a sustained run in training, but it is probably the same for Pike Rovers.”

Pike lost 1-0 to Villa FC in the FAI Junior Cup final and the Shannonsiders have been one of the country’s leading junior teams.

Gibson has seen footage from the Junior Cup run, but admits that Sunday will still have a shot-in-the-dark feel given that personnel will have altered in the two months since the final.

Bonagee recently won the Donegal Youth League and Noah Barrett, who captained that side, has been elevated into Gibson’s ranks. Josh Maxwell, another leading protagonist from the youths, is another who could make the step.

Kilmacrennan twins Stephen and Conor Black have been recruited from Finn Harps this summer as Bonagee head down the senior cup road for the second summer, having lost out to Maynooth University Town last year. That tie was a preliminary round fixture and this weekend represents Bonagee’s first time in the ‘first round proper’.

“This group has played in some big games and this is another one of them,” Gibson said. “When we came into the club a few years ago, the group hadn’t played in enough big games. When you’re doing ‘firsts’, it’s always a good sign of how things are going.”