The Dry Arch Park side are in the second round draw of the extra.ie FAI Senior Cup this afternoon 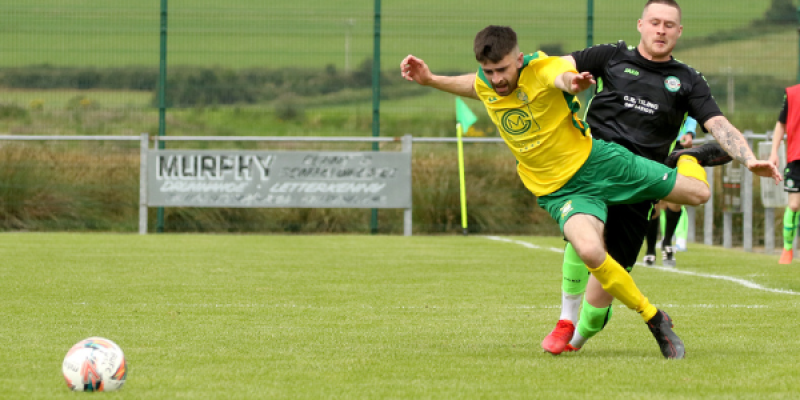 Conor Black on the attack for Bonagee United against Pike Rovers on Sunday. Photo: Thomas Gallagher

Bonagee United manager Jason Gibson is eyeing up a big tie in the second round of the FAI Senior Cup.

A 6-0 home win over Pike Rovers from Limerick on Sunday - Bonagee’s first ever win in the Senior Cup - puts Bonagee into the hat for this afternoon’s draw.

Another home tie at Dry Arch Park is the big aim for Bonagee now with most of the League of Ireland Premier Division’s heavy artillery still in the mix.

“It would be great to get another home draw in the next round,” Gibson said.

“If you had some of the big teams and the tv cameras here, it would be brilliant. We’ll look forward to the draw now and see where it takes us.”

A brace from debutant Conor Black, two by Tony McNamee and strikes from Micheál Doherty and Jamie Lynagh sealed a historic win.

Gibson’s men won a cup treble last season and these are heady days for the club.

“This is a senior club to me, the way they conduct themselves. This was a chance for the club to showcase what they’ve worked hard at over the years.”