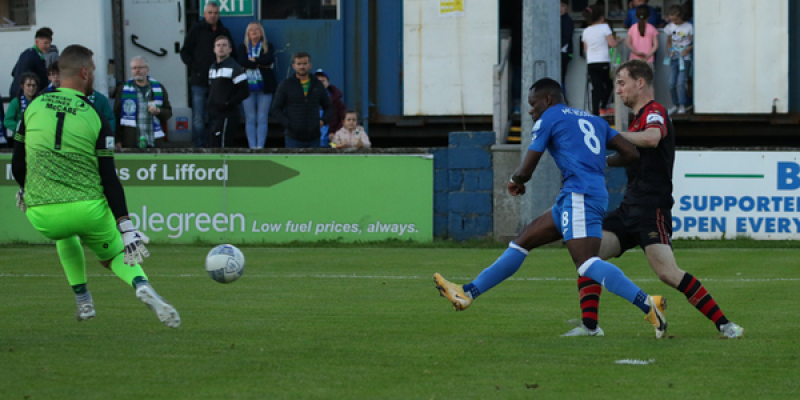 Eric McWoods scored twice as Finn Harps moved off the bottom of the Premier Division.

The American’s double, after Filip Mihaljević’s opener, saw off Drogheda United as Harps won for the first time in 13 outings.

Ollie Horgan’s men slipped to the bottom of the pile on Monday night when UCD drew with Drogheda, but Harps’ best performance of the season so far gives Harps a massive lift ahead of next Friday’s trip to relegation rivals UCD.

The breakthrough came in the 23rd minute when Croatian striker Mihaljević drilled home from the penalty spot after Eric McWoods was taken down in the area.

A minute before half-time, Harps added a second. McWoods clipping past Colin McCabe, the Drogheda United goalkeeper after being fed by Mihaljević.

The third arrived 13 minutes into the second half. The ever-lively McWoods was picked out by Regan Donelon’s inviting cross from the left wing after Ethan Boyle surged at the Drogheda rearguard and the striker’s header flew high into the net.

Former Harps attacker Adam Foley was denied by Harps ‘keeper James McKeown in the 10th minute. McKeown had a night to forget on his debut seven nights previously in the 3-1 loss to Bohemians in the FAI Cup, but the experienced former Grimsby Town net minder cut a rather more assured presence here.

Foley scored 10 goals for Harps in an 18-month spell that closed at the end of last season. A pre-match interview by Foley, in which he said he had been ‘just cast out’ by Horgan, added a little spice to this fixture.

Rob Slevin and Chris Lyons were off target with early heads before McCabe saved from a tame McWoods shot after the American broke the offside trap to latch onto Elie-Gael N’Zeyi’s pass.

N’Zeyi and Regan Donelon returned to the Harps XI. Ryan Rainey and Rob Jones were left out, while Mark Anthony McGinley was a notable absentee from the home squad.

In front of a low attendance of 843, Harps had a big let off in the 13th minute when Darragh Nugent fired off a post from the edge of the box.

Mihaljević and McWoods combined in a move that might’ve broken the deadlock four minutes before the opener arrived. McWoods’ header presented Mihaljević with the chance, but McCabe saved, turning the Croatian’s shot out for a corner.

From the set-piece, Drogheda - who were without the injured Keith Cowan - broke with purpose. Darragh Markey was denied twice in quick succession: Barry McNamee blocking before the rebound deflected out off Drogheda player Chris Lyons.

Ten minutes into the second half, Ryan Connolly was unable to test McCabe with a first-timer from 20 yards.

McKeown beat away a free-kick from Gary Deegan and smothered a Dayle Rooney effort in the space of a minute as Drogheda set about salvaging something.

Any notions of a comeback were quashed when McWoods headed in his second of the night.

McKeown brilliantly kept out a tester by Ryan Brennan to keep his sheet clean and send Harps hurtling into the trip to Belfield with a welcomed injection of confidence.