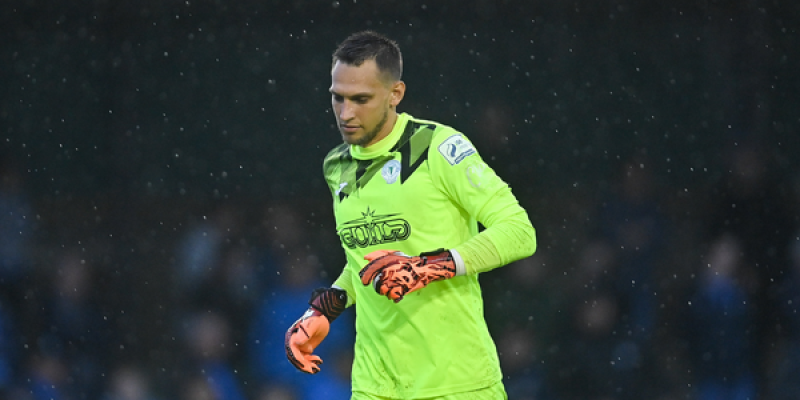 When James McKeown mulled over his possibilities having been released by Grimsby Town, Ballybofey wasn’t on his radar.

When McKeown met with the Finn Harps manager, Ollie Horgan, suddenly his ear was bent.

After a forgettable debut in a 3-1 defeat by Bohemians in the FAI Cup, McKeown cut a much more assured figure on Friday night.

The 33-year-old kept a clean sheet in a 3-0 win that hoisted Harps off the bottom of the Premier Division.

“I felt like I owed a bit of a performance after last week so I was delighted to contribute in my own way,” McKeown said.

“I’m 33 now. I had a bad game last week and I’m the first to hold my hands up. I came for a cross that I should’ve done better with. You have to brush that off as a goalkeeper.

“ If I let that effect me the next week, it’s only going to affect the lads. Everyone at the football club has been brilliant and have made me and my family feel so welcome.”

McKeown made over 500 appearances at Grimsby and had a testimonial in 2021.

A fans’ favourite at Blundell Park, McKeown, whose grandfather hails from County Antrim, played for the Republic of Ireland at under-19 level.

“When this opportunity came up, I just said why not and I’m pleased that I took it,” the Birmingham-born McKeown said.

“My time at Grimsby come to a natural end after 11 years and I wanted a new challenge. I wasn’t sure where or what. My wife has been unbelievably supportive.

“I met Ollie a while back and he’s a great man. I just wanted to play for someone who is honest. This is a really good club and I’d like to help us get out of this. Football changes so quickly.”

Friday’s win, with Eric McWoods scoring twice after Filip Mihaljević’s opener, gives Harps a new sense of optimism ahead of a massive clash at UCD, their relegation rivals, on Friday night.

McKeown said: “There is a belief in here and there is togetherness with the staff and the players.

“The lads were outstanding. Even at the end, when it might be easy to switch off and let them get a goal back, we still threw bodies on the line to keep a clean sheet.

“It’s a massive lift for us. Next week is maybe bigger and we have to go there and get something.

“It’s long overdue that we got a win. It’s all about next week now. You can’t dress it up; it’s a huge game.”