The Ramelton club played all of their games away from home last season, but are ready to return to Swilly Park this weekend with some stellar former players to perform the official reopening 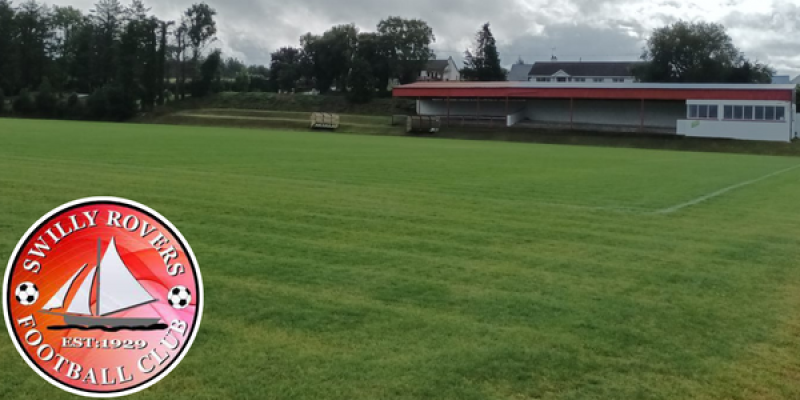 Swilly Rovers relaid the pitch at Swilly Park, which will be officially reopened this weekend.

The pitch at the Ramelton venue was relayed following extensive works which began in the summer of 2021.

Having played all of their games away from home last season, Swilly are ready to make their Swilly Park return with Bonagee United to visit on Sunday in the Brian McCormick Cup.

The previous evening, the formalities of the official opening will take place.

Councillor Ian McGarvey, who captained Swilly Rovers to victory in the 1962 FAI Junior Cup, will be joined by current League of Ireland players and former Swilly Rovers players Ronan Boyce, Keith Cowan and Barry McNamee in performing the tape-cutting ceremony.

Runners-up in the 2021 competition, Bonagee United are back in the final of the Colin Breslin Youth Cup after a hard-earned win over Ballybofey United

“There has been a nice wee buzz about the club again and we’re hoping to have a good crowd on Saturday.

“It’s brilliant for the young players in the club to be back playing in Swilly Park again. The club is definitely on the up again after a few stagnant years. We’re getting good buy-in from the community now and the players on the seniors are all local again, which is a big help for us.”

The works to the pitch were carried out by William Coyle and his team from Pitch Dimensions.

In the 2019, Sports Capital and Equipment Programme, Swilly were awarded €64,232 for the work to the pitch with the club contributing €21,000 of its own funds. A further €70,746 for refurbishment of the astroturf facility at Swilly Park was awarded earlier this year in the last Sports Capital programme.

Toland paid tribute to Edward Diver and Tommy Patterson, who looks after much of the maintenance work at Swilly Park, Kevin Coffey whose work was instrumental in securing the funding and to her own committee at the club.

Her husband, Laurence Toland, has made his own return to the club having spent five years at Cockhill Celtic. Toland is now heading up the management team of the Swilly Rovers seniors who will aim to make a push for promotion to the Premier Division.

A free family fun day, including football blitzes, bouncy castle, face painting and balloon modelling gets underway at 3pm. The officially pitch reopening takes place at 5.30pm and a grand draw, with a top prize of €1,000, being held at 6pm.