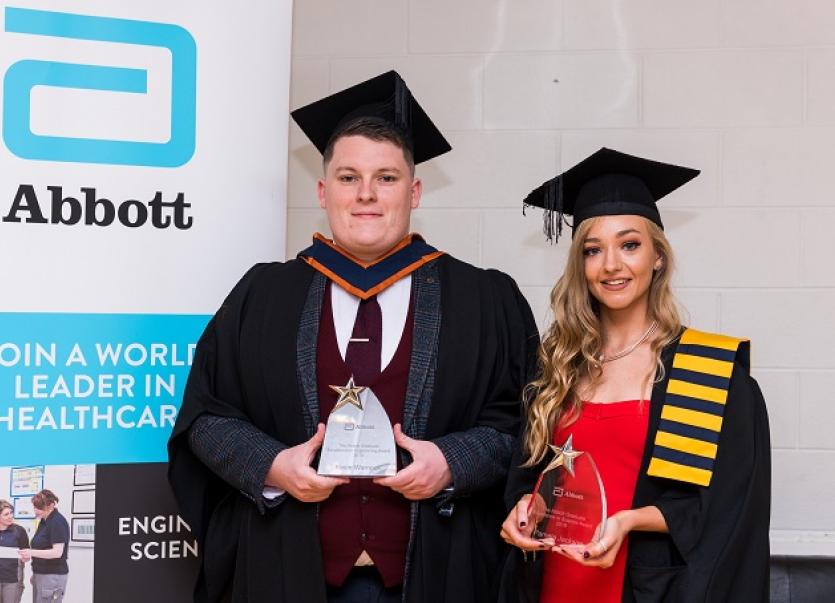 A student originally from Ballybofey, Donegal is one of two students from IT Sligo who received The Abbott Donegal Science and Engineering Graduate Excellence Awards at the Institutes recent graduation ceremony.  The awards recognise those students who encompass the core values on which Abbott Donegal’s success has been built;

Excellence, Integrity and Teamwork. Rather than selection based on academic achievement alone this initiative highlights those who have contributed to their surrounding in an inclusive and constructive manner. This year’s successful graduates Kevin Warnock from Donegal and Pamela Jackson, Stradone, Co. Cavan have since taken up full time positions with Abbott Donegal.

Kevin Warnock, originally from Ballybofey, Donegal and now residing in Leitrim village, is the 2019 winner of the Abbott Donegal Award for Excellence in Engineering. Kevin obtained his leaving certificate in 2014 and was unsure of what career to pursue. Taking a year out to reflect, Kevin obtained full time employment with Abbott Diagnostic Division in Longford. Working as a Diagnostic assistant, Kevin sought the advice of his work colleagues many of whom were engineers. Some of which had completed courses in IT Sligo and recommended it as a place to study. This along with the advantage of being close to home and smaller class sizes contributed to the choice to study Mechanical Engineering in IT Sligo.

"To be the awardee of the Abbott Donegal Engineering Excellence award fills me with pride as I feel like I am an ambassador for IT Sligo. Working in a challenging and awarding environment, it is a great opportunity to grow within a thriving company like Abbott. "

Kevin graduated from IT Sligo in November with his father Richie and brother Daniel on the same day.

“The Abbott brand has truly become a household name in the region since the establishment of its first Irish plant in 1974. As Head of the facility of Science it has been a pleasure to work with Abbott on various collaborations over the years. Continuing this tradition, the IT Sligo Abbott Excellence awards are an innovative and fluid model. Acknowledging the achievements of our Science and Engineering students while offering a seamless path from study to career. I would like to take this opportunity to wish Kevin the very best with his career in Abbott Donegal.”

IT Sligo and Abbott are now on the search for the next successful candidates.