Battle of Pettigo statue repaired in time for Easter Commemoration

Unique battle where there was a stand-up fight with a defined battle line, and artillery used against the I.R.A. 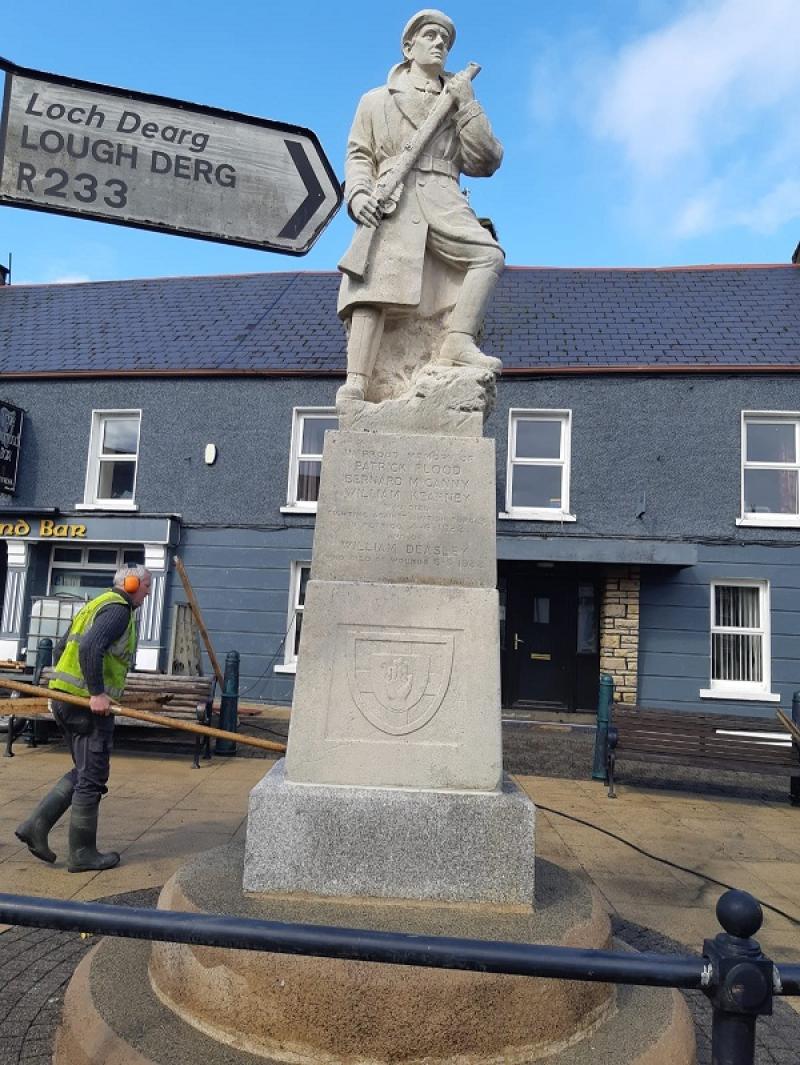 The restored memorial in Pettigo

South Donegal County Councillor Michael McMahon says that he is delighted that the memorial statue to those that died in the Battle of Pettigo, back in 1922, will be ready for the annual commemoration service there on Easter Monday.

"This has been a personal project of mine for a long time. This year we will celebrate the 100th Anniversary of the four men who died at the Battle of Pettigo.

"I want to thank Brendan Brady of Brady Domestic & Construction Services and Donegal County Council for the excellent work in cleaning and renovating the memorial statue in Pettigo.

"Our Commemoration will be at the monument in Pettigo on Easter Monday at 3pm. The main speaker will be Barry McElduff and the Strabane Memorial Flute Band will provide the entertainment. Everyone is welcome to this important occasion!"

A sworn account in the Bureau of military history archives of the Irish Defence Forces, thirty years later gives a description of the epic battle:

"On Thursday, June 1st, a number of lorry loads of British soldiers followed by four Crossley loads of Specials
advanced on the town of Pettigqo. The Specials opened fire with rifles and machine guns on the I.R.A. Volunteer
outposts stationed on Drumhariff Hill and at Pettigo railway station.

"The I.R.A. returned the fire and then the British soldiers joined in with rifles and machine guns.
This engagement lasted an hour and a half during which a number of British soldiers were killed and a number wounded.
They then retreated. During Thursday and Friday nights there was intensive sniping at Pettigo by Specials which
ware now reinforced from Belfast.

"During Friday, June 2nd, and Saturday, June 3rd, the British commandeered all the boats on Lough Erne and assembled them at Portonode, from which they transported in them a battalion of British soldiers across the Lough to Boa Island. They were
marched through the Island and from thence they were transported in the boats to Letter which is two miles
below Pettigo.

"In the meantime another battalion of British soldiers advanced during the night from Kesh to
Lowry with a view to joining the battalion at Letter. This would entail crossing the isthmus at the Waterfoot but the I.R.A. Volunteer outpost established there: since Monday were determined to prevent this union. All throughout Saturday night both battalions of British soldiers made repeated attacks on the I.R.A. Volunteers at the Waterfoot in the hope of dislodging them but they failed to do so.

"During the intense fighting on Saturday night a section of the I.R.A. Volunteers; crept from Pettigo,
a distance of a mile, to assist their comrades at the Waterfoot. During the week, a large party of Specials had gone into Donegal through Lettercran which is five miles from Pettigo, and had terrorised the people, had shot and seriously wounded two girls.

"Now on this Saturday night of June 3rd this party of Specials, about two hundred, tried to cross at Lettercran from Fermanagh into Donegal so as to attack Pettigo from the rear but a party of I.R.A. Volunteers foreseeing their intentions intercepted them there and after a fierce engagement put them to flight burdened with their dead and wounded.

"The third engagement of this eventful night took place in Pettigo town. Two British Battalions tried in vain to take the town. Then on Sunday morning, June 14th, a fleet of armoured cars and infantry again attacked it
but the driver of the leading armoured car was shot dead through the head and the car overturned and blocked the
road.

"Fire from the Volunteers prevented them from clearing the way for some time. At this stage a battery of Howitzers Artillery was brought into action by the British. Under this fire the unit of Volunteers covering the bridge was forced to withdraw to new positions and the British then cleared the obstructing car and the barricade at the bridge and advanced into the town.

"As this main thrust was being made, two other columns of British troops, that which had been stationed at Letter and another from the right by Lough Derg road, attempted to join forces so as to encircle the town, but fire from the Volunteers on
each flank kept them at bay and left the escape route open to the main body of the Volunteers who withdrew to the hills
and kept up a running fire until 5pm when they retreated to Donegal. town.

"But the machine gun post of about eight I.R.A. Volunteers which manned Drumhariff Hill covering the approach to the town, held their position until their ammunition Was exhausted and then the post was surrounded and captured.

"Three of the gallant defenders, Patrick Flood of Pettigo, Bernard McCanny and William Kearney of Drumquin, were killed at their post. 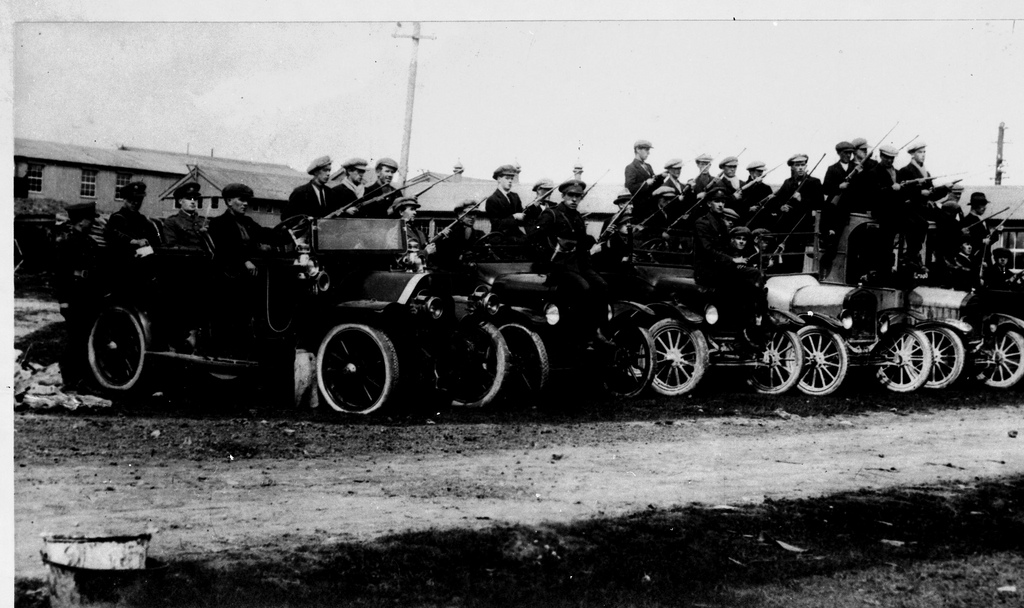 "While the fighting was taking place in Pettigo town, the post which manned the Waterfoot was heavily engaged by
vastly superior numbers of British forces and were forced to surrender after two hours.
"Thus ended the Battle of Pettigo, a battle that is unique in two things, namely, it is the only place where
there was a stand-up fight with a defined battle line and it is the only place in Ireland where artillery was
used against the I.R.A.
"A monument is to be unveiled at Pettigo town on August 15th this year (1952) to commemorate those who died in
that battle and in other engagements in the still unfree counties. it is expected that all surviving members of
the Northern I.R.A. Brigades will be present at the unveiling ceremony.
"The following British Battalions took part in the Battle of Pettigo: - The Lincolnshires, The Manchesters,
The Staffordshires, A Howitzer Battery, Airforce Details and the 2nd Battalion of the Scottish Borderers. There
were in all twenty Battalions standing by.
"These Battalions of British soldiers were sent to Ulster by Mr. Winston Churchill, the then Secretary for
War in England, on the advice of Field Marshal Sir Henry Wilson, Military Adviser to the "Ulster' Government,
because the pick of his Specials had been routed by less than one hundred I.R.A. Volunteers in their teens who
withstood that final week under continuous fire without sleep or rest, although poorly armed mostly with weapons
captured in earlier engagements.
"We the undersigned who have compiled the above account of the events which took place at Pettigo and its
neighbourhood from the 27th May 1922 and which continued up to the early hours of the 14th June 1922 were active
participants as members of the I.R.A. Volunteer Force in the events described.

"We have checked over the various versions which each of us remembered and we have discussed and checked the statement with others who also took part. We are all satisfied that this document is as accurate as we can now make it.
Signed: John Travers; James Scollan; Nicholas Smyth; Denis Monaghan; Felix McCabe. Date 24th July 1952
Witness: John McCoy.