Battles were significant in fledgling relations between North, South and Westminster 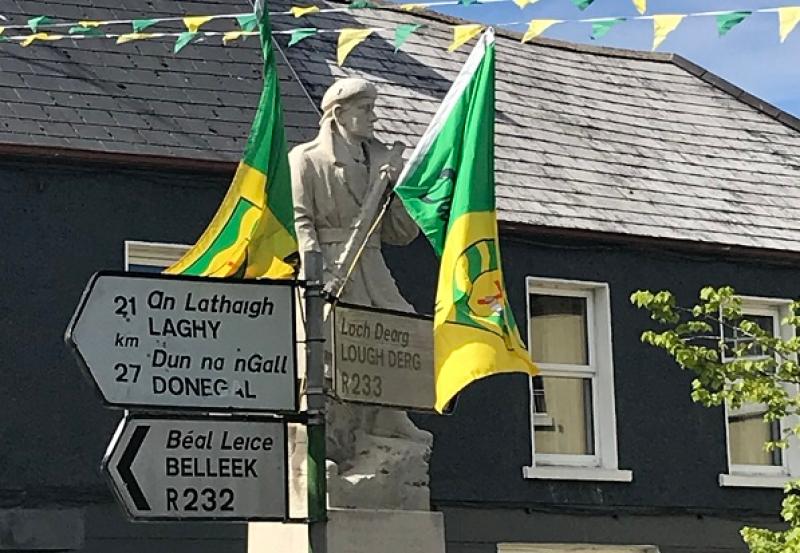 The Termon complex in Pettigo was packed to capacity earlier today, as a significant series of events, which occurred between the War of  Independence and the Irish Civil war, one hundred years ago was marked by a number of historical perspectives being articulated as to the real time narrative of historic events that unfolded at that time.

It had all the hallmarks of a historical blockbuster which included intense communications, high stakes, nigh ultimatums between Michael Collins, Winston Churchill and in the North, James Craig, over those tentative weeks.

The Battles of Belleek and Pettigo were unique on many levels, not least their very delicate timing, just before a General Election in the Free State, over whether people supported or wanted to throw out the Anglo Irish Treaty.

At different stages in this ding dong battle, there were infiltrations both south and north from both the IRA and British Forces.

There were fears that this could even escalate into a full blown and renewed war of attrition between the British and Irish Forces, in whatever guise they were called.

We learned how Michael Collins was still negotiating with Westminster via Churchill while still contemplating, if not directly backing, a Northern offensive, to destable the fledgling Northern Ireland.

He became increasingly worried about the area, where most of the violence was taking place at the time on the island and that was against Catholics, in Belfast, often referred to as the 'pograms'. 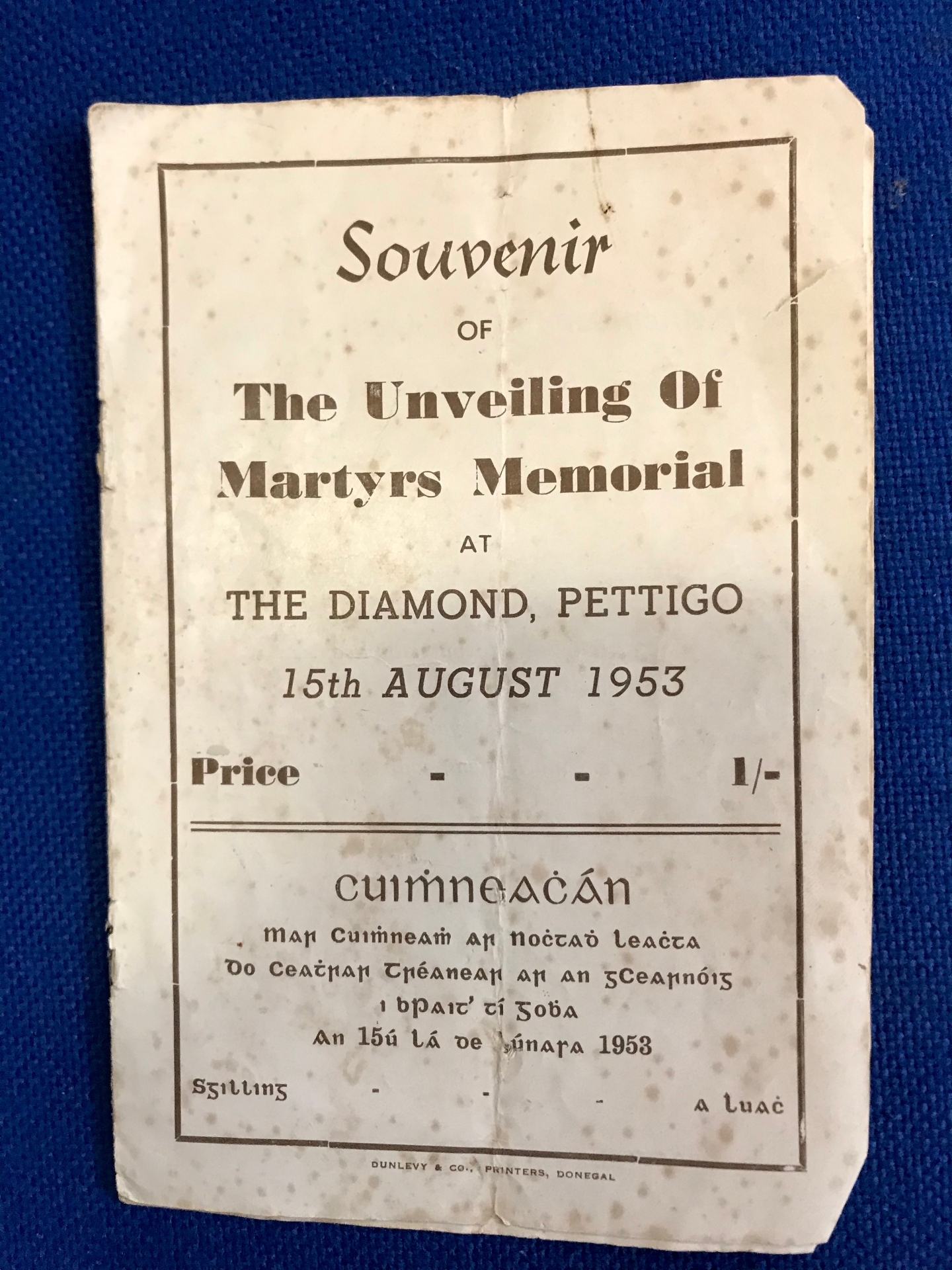 A photo of the original unveiling of the Martyrs Memorial programme on August 15, 1953

It was the only time that there was direct engagement between the IRA and British Forces since the Easter Rising, including shelling of IRA defences.

It was the last time that Pro and Anti Treaty Forces fought side by side in a pact between opposing side of the Anglo Irish Treaty Michael Collins and anti treaty commander Liam Lynch.

Parts of south Donegal overlooking Belleek and Pettigo remained under British control for a period after the confrontations which occurred between the end of May and early June.

The British feared that these overlooking areas from the Free State in Donegal would be used for continued attacks on the British. Tensions remained high in those locations but the British eventually handed back parts of occupied Pettogo in January 1923 and Belleek fort/battery in August of 1924.

Indeed, there was a neutral zone created, where only the British could bare arms in and around Pettigo and Tullyhommon, the part of the village that is part of Co Fermanagh. 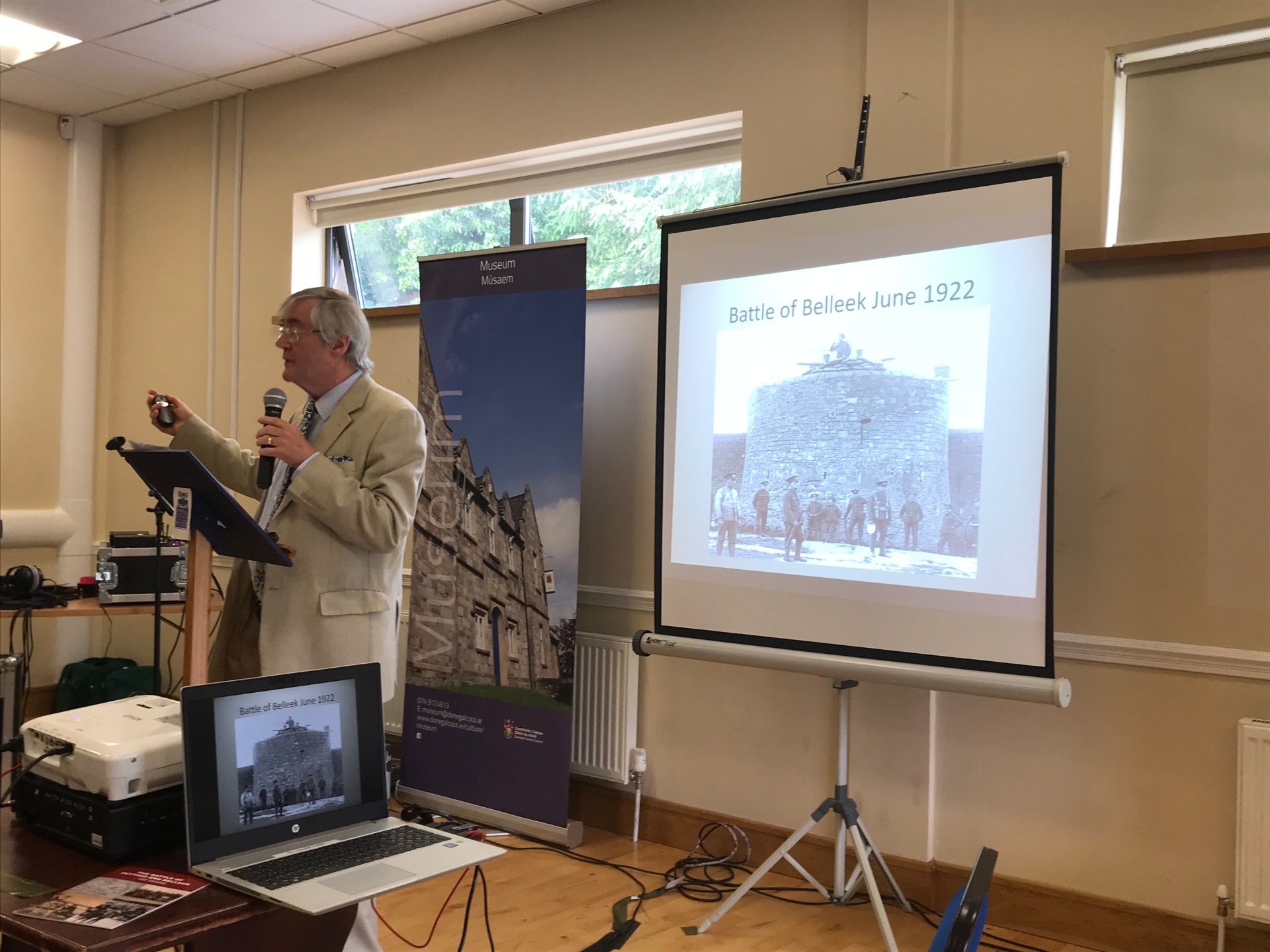 The proceedings began with a welcome by Leas Cathaoirleach of Donegal County Council Cllr Martin McDermott and Vice Chair of Fermanagh and Omagh District Council, Cllr Chris McCaffrey, in what was a joint initiative between the county museums in Donegal and Fermanagh.

Dr Éamon Phoenix spoke with great knowledge on: ‘Raids, Reprisals and the Boundary Question: From the Clones Affray to Craig-Collins Pacts, the Battle of Pettigo and the Civil War, 1922’

As well as being a Historian and Historical Consultant, Broadcaster and Journalist the noted academic is also a member of the of the Taoiseach’s Expert Advisory Group on Commemorations.

Corkonian Dr Edward Burke spoke of the British perspective of events which was called Operation Basil. His contribution was entitled: 'The British Army’s Offensive in Belleek and Pettigo’. 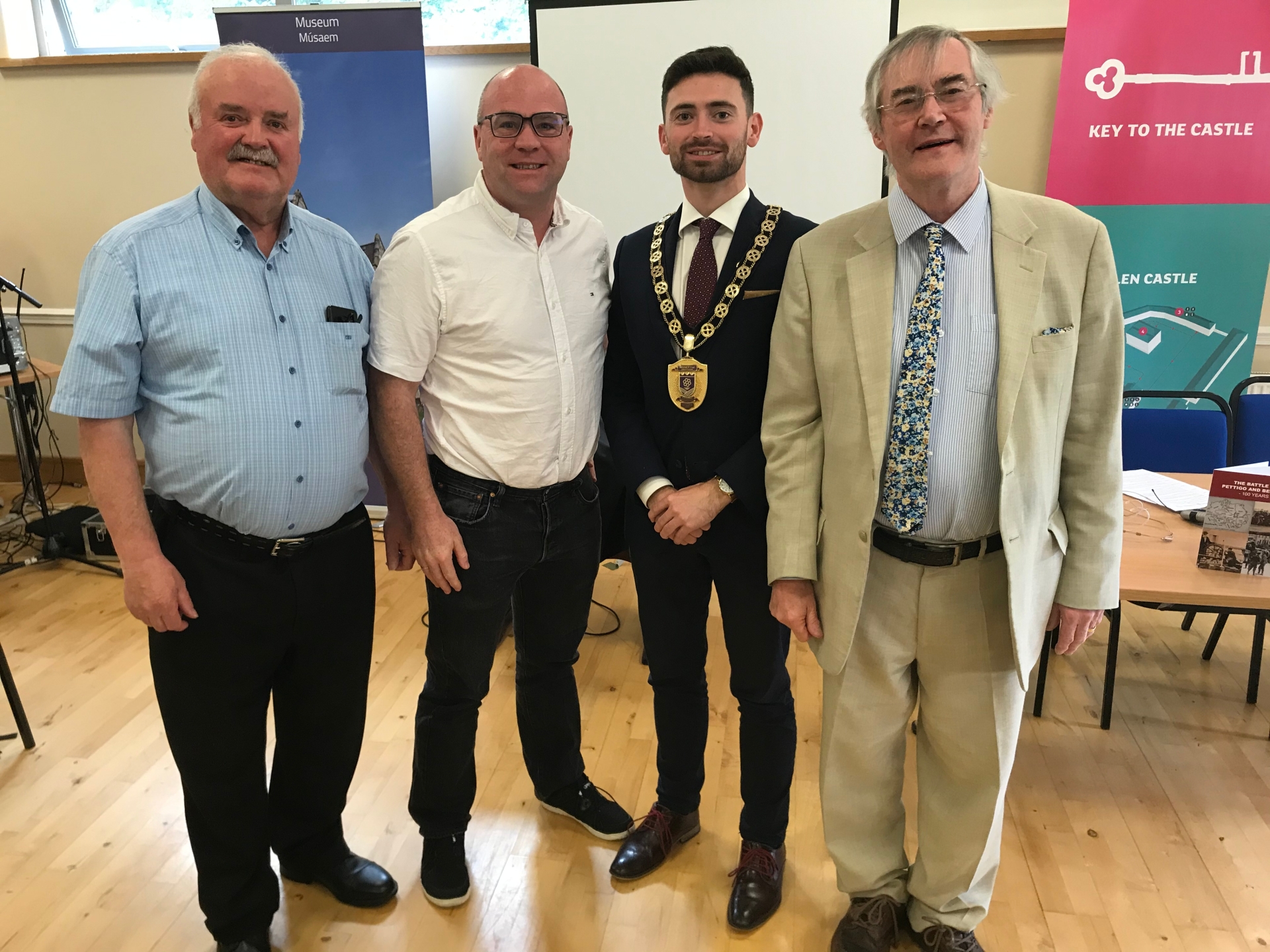 He is currently the Associate Professor in International Relations at the University of Nottingham. Currently undertaking a two-year early career fellowship funded by the UK Arts and Humanities Research Council Fellowship. The title of his research project is, "The Greatest Weight? Paramilitaries, Deterrent Violence and Feud in Ulster's Borderlands since 1920."

This was followed by Premiere of Battle of Pettigo/Belleek Animation which is part of the Bordering Realities Project, funded by the Creative Ireland Programme with

During the History Ireland Hedge School panel discussion, where History Ireland editor Tommy Graham with Dr Éamonn Phoenix, Dr Edward Burke and Dr Margaret O’Callaghan, Senior Lecturer in Politics in the School of Politics, International Studies and Philosophy at Queens University, Belfast for a panel discussion on the Battle of Pettigo and Belleek. 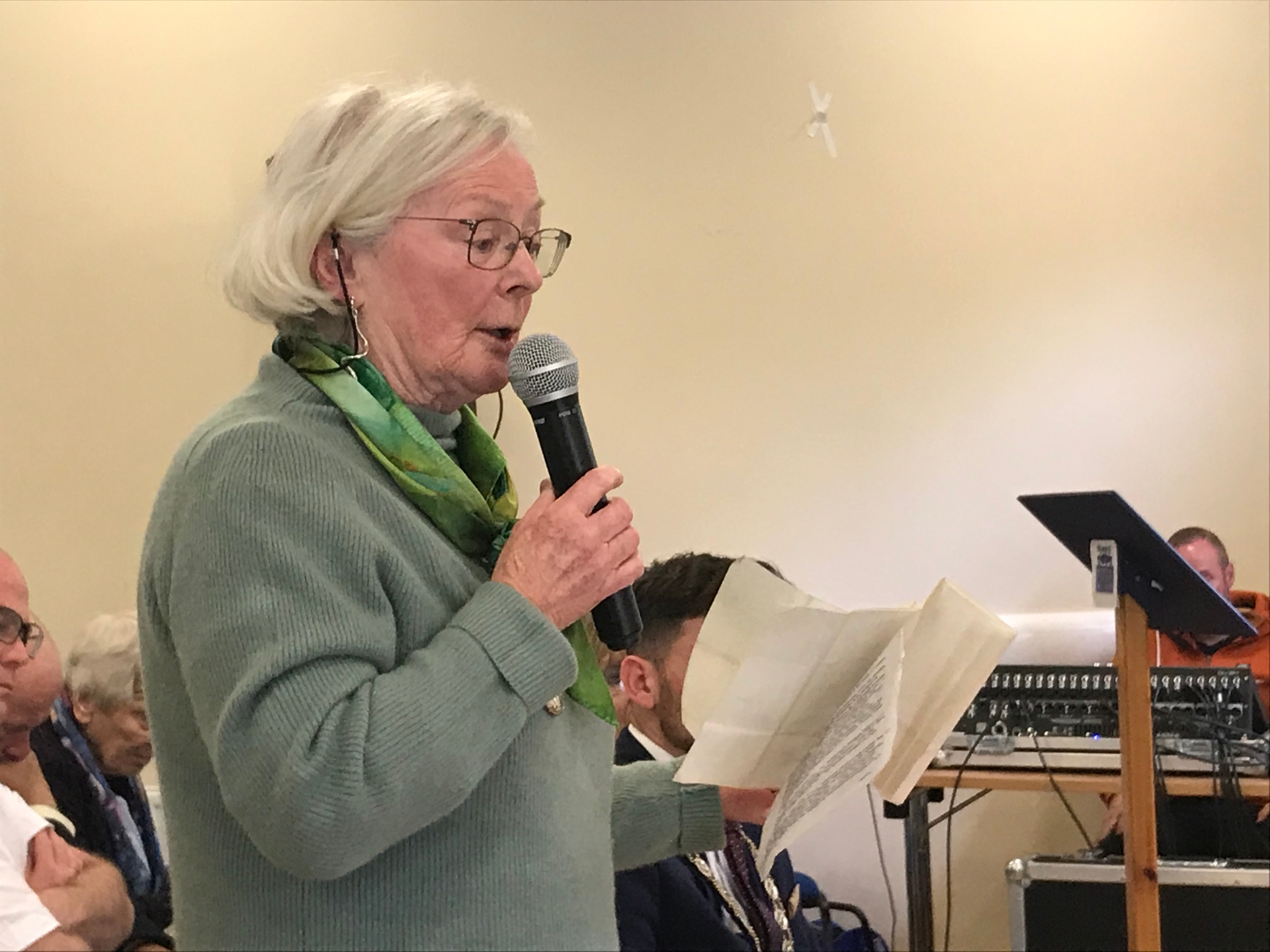 Noirín Butler, daughter of the late Jim Scallon, who was from Boa Island and took part in the Battles

One of the most interesting contributions from the floor was from the daughter of one of those who participated in the Battle of Pettigo, Liam Scallon from Boa Island.

Nóirin Butler spoke passionately as to what her late father Liam had been told in communications with Collins in advance of confrontations with the British.

Her father had a clear understanding that Fermanagh, parts of Tyrone and Armagh would be moved into the new Republic under the terms of the Boundary Commission. It was the reason he had come south to join the Irish forces south of the border. These debates went on until the 1980s in her family home, with others who had also been involved in the 1922 battle. 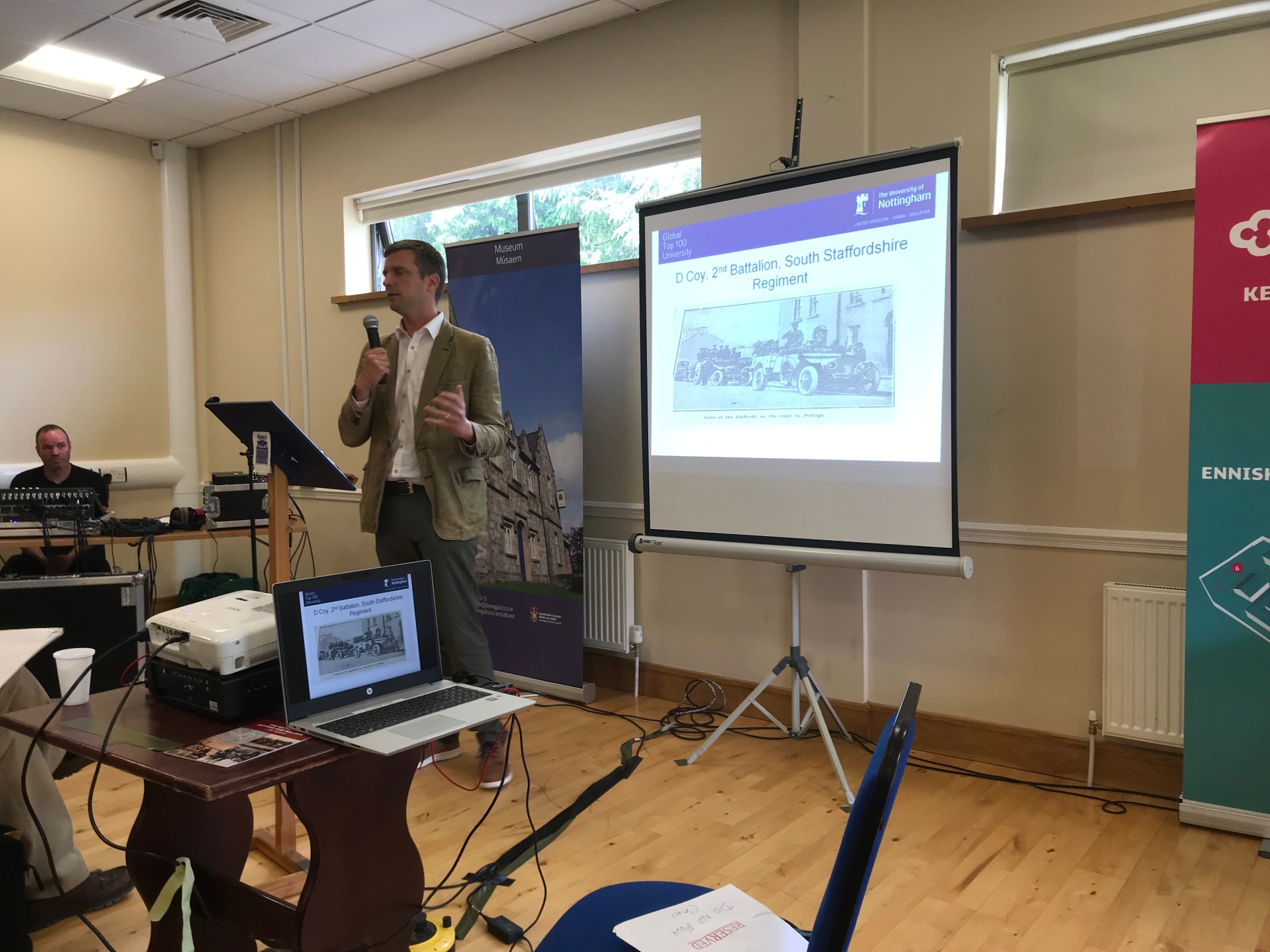 A nephew of Patrick Flood (19), who had died in the battle, John Fullerton also reflected on the deep legacy his Uncle's deaths had on Mr Flood's extended family for decades afterwards and still does.

Later Jimmy Baird, local historian and Caroline Carr, Donegal County Museum led walking tours of Pettigo and this was followed by a bus tour with local historian Johnny Cunningham (58 publications on local history he has published to date)and Pauline Gilmartin, another local historian offered her local knowledge on a bus excursion to Belleek

Such was the number of people who had booked on the day that a second bus was required to transport those on the outbound excursions.

The day was marked with glorious sunshine and Pettigo was festooned in Donegal flags in advance of the Ulster Senior Championship football final which takes place in Clones on Sunday afternoon against Derry.