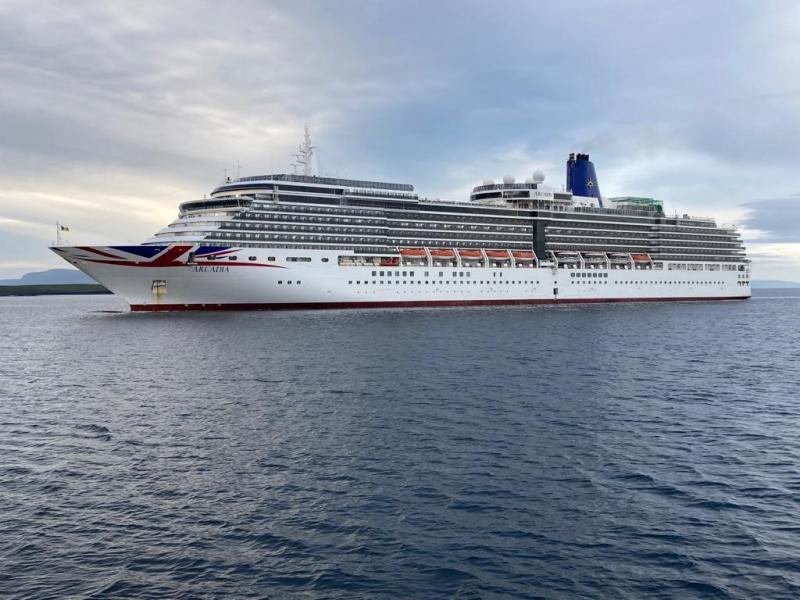 The number of cruise ships visiting Killybegs this year is at record levels - and the outlook for 2023 is even better.

More than 12,000 passengers and crew have arrived on 13 ships so far this year, and another eight are scheduled before the end of the season.

The largest ship this year was P&O’s Arcadia which called last Friday with over 1,600 passengers, mostly from the UK.

At 289 metres in length, it is almost exactly twice the length of the Croke Park pitch.

The 84,342 tonne ship, which has 11 decks, visited Killybegs as part of a 14 night itinerary that began in Southampton and which takes in calls to a number of Scottish islands as well as the Faroe Islands before returning to the to Southampton via Greenock-Glasgow and Holyhead in Wales.

According to Sinbad Marine Services Ltd, ship agents, more records are set to be broken next year, with more than 25 cruise ships booked to visit the port as part of their itineraries.

The expanding cruise business has a positive knock-on effect for the local economy.

A spokesperson for Sinbad Marine said: “Many passengers take coach tours spreading the benefit of these visits throughout Donegal while some choose to stay locally and enjoy the town. In addition, direct purchases directly from the ships include provisions, crew transport and ship supply services from local businesses.”

Among the ships confirmed for 2023 are the 294.13m MV Norwegian Star which will become the longest ship to visit Killybegs, edging out by centimetres MV Queen Victoria as the previous record holder.

Barely in second place will be the 293.2m MV Mein Schiff 3 which will also be making its maiden visit to Donegal.

Killybegs is well positioned to cash in on the massive cruise tourism business which is bouncing back after becoming becalmed during the Covid pandemic.

Ireland was enjoying a surge of cruise ship visitors before the Covid outbreak.

One of Killybegs’ big advantages is that it is a deep water port, and can accommodate large vessels. Some ports, like Galway, are more restricted and tenders are needed to ferry passengers between the larger cruise ships and the quays.

According to the Central Statistics Office, Killybegs had 11 cruise ship visits in 2019 (before the Covid pandemic), with 8,208 passengers. A total of 315 cruise ships visited the Republic of Ireland that year, carrying 432,443 passengers.

The next cruise ship scheduled to visit Killybegs is the Azamara Pursuit on August 8, at 8.00 am. Killybegs will be the fourth port of call as part of an 11 night ‘Ireland Intensive Voyage’ itinerary that begins and ends in Southampton. The other ports of call are: Cobh, Foynes, Galway, Derry, Belfast, Warrenpoint and Dublin. Prices typically start from €2,431 per person.