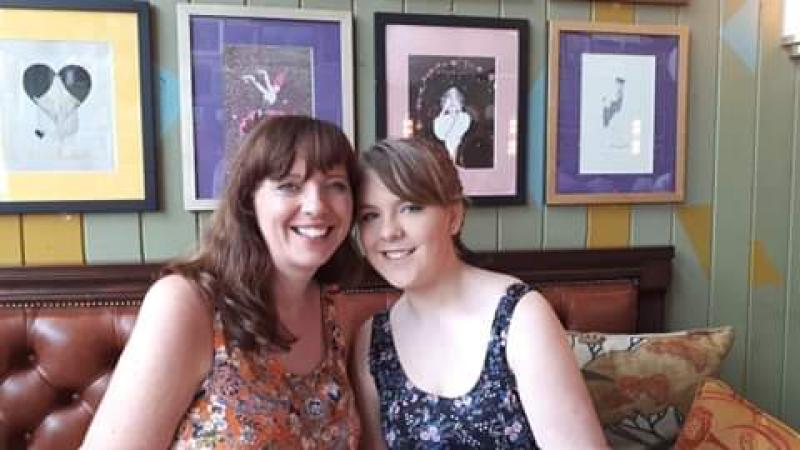 Praising her “dedicated” teachers, one Inishowen Junior Cycle student said they had the “best interest of their students” at heart.

Speaking to Donegal Live, Anya Edwards (15), a Crana College student, and her mum, Catherine, said they were also “relieved and happy” to have received “some certainty” following last week’s announcement Junior Cycle State Examinations will not run this year.

Burt teenager Anya said she was “happy” at how the Junior Cycle 2020 situation had been resolved, eventually.

Anya added: “I’m happy the way they ended up, that they did cancel our exams, because I don’t think it would have been fair to have made us sit exams when we haven’t been in the classroom since March.

“I was saying to my mum the other day, whilst I’m learning and revising, because we are doing online classes, I am not retaining information the way I would if I was in the classroom.

“It was stressful too not knowing what was going on and the Government changing their minds and coming up with new ideas all the time. It would definitely have been way more stressful had we had to sit exams under those circumstances.

“In terms of Junior Cycle 2020 marks, I think Crana College’s proposed method is good. I don’t think having to sit exams in June would have ended very well for most of the people in our year after so much time out of the classroom,” said Anya.

On Friday afternoon, Crana College contacted Junior Cycle students and their parents with an explanation of how this year’s Junior Cycle will operate within the school.

A student’s final mark in each subject taken will be calculated by taking their mock exam result, plus 10 percent (to allow for the usual increase in marks between the mocks and the June exams), plus 5 percent (based on work or a short test completed since the mock exam, up to May 22).

Junior Cycle students at Crana College will receive a school report in June and a State Certificate, indication completion of Junior Cycle, soon after the new academic year begins.

Commending Crana College, Anya said: “I think Crana College is dealing with the Junior Cycle ‘situation’ the best it can. Despite all the uncertainty the teachers are doing the best they can. I think they are all acting in the best interests of their students.”

As a young person with an Autistic Spectrum Disorder (ASD), Anya said coping with ‘lockdown’ was part of her wider “life experience.”

She explained: “I have always struggled when it comes to texting friends because I don’t have the face-to-face contact to help me pick up on facial cues, so I am very withdrawn because I don’t often text my friends.

“Now, I am having anxiety because, if I want to socialise during ‘lockdown’ it is going to end up being through text.”

Anya’s mum, Catherine, who is a teacher in Derry, said the initial uncertainty around Junior Cycle 2020 had been “difficult.”

Catherine said: “As a parent, watching your child getting stressed isn’t the best feeling in the world. You are trying to keep them calm and let them get on with the work and trying to encourage them to do as much as possible. It has been difficult. At the beginning [of ‘lockdown’] there was an awful lot of uncertainty about what was happening in terms of Junior Cycle 2020.

“When the UK originally cancelled their exams, I was thinking ‘Oh well, it’s a long time off.’ But as time went on, I thought, ‘Well at least [in Derry] they know what’s happening.’ They had a decision very early on, whereas in Donegal, it’s been very uncertain for a long time. Then there was the whole backwards and forwards. Junior Cycle 2020 was going ahead and then it was cancelled, eventually.

“Anya is my daughter, I can only talk about her and the way she reacts to things. I know she’s found it very stressful. She is quite anxious about it all and she hasn’t been sleeping particularly well. It has been playing on her mind. That’s the type of child Anya is. However, I know some of my friends children are taking it in their stride.

She said: “I was talking to some of the teachers because Anya is autistic and just trying to sort a few things out. They have been really, really supportive, I just have to say that, as a parent.

“The teachers are doing the best they can trying to as supportive as they can to both students and parents.

“My thanks must go to all the teachers who are having to take the time answering emails. They have been really good and supportive Everyone just wants the best for everyone. The teachers at Crana are working really, really hard for the children they want to see the best outcomes for them,” said Catherine.