Junior stars are flying the flag for Letterkenny Golf Club

A wonderful year of success for Letterkenny golf juniors 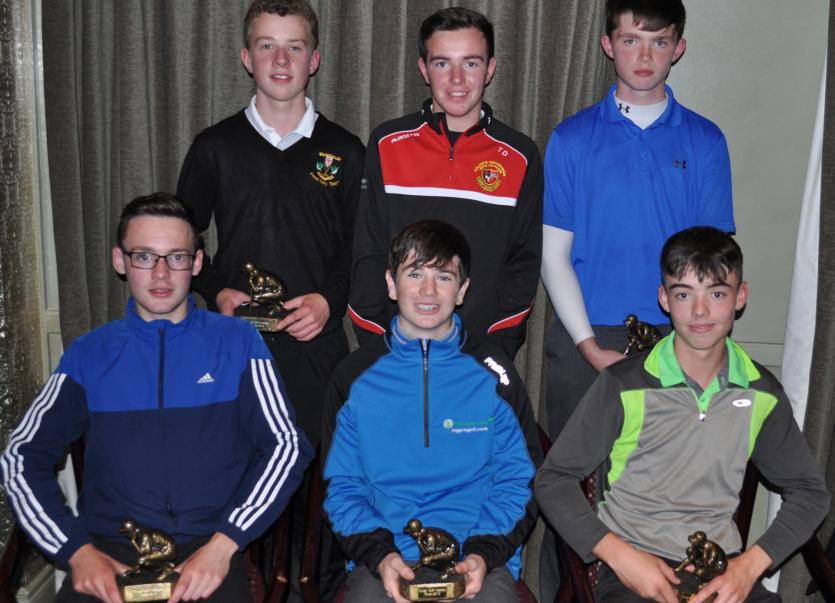 Some of the young players who have enjoyed such a great year representing Letterkenny Golf Club.

Congratulations in abundance to the group of junior golfers from Letterkenny Golf Club who participated in the Applegreen Low Fuel Card Irish Junior Open Series 2016 recently.

Event organizer and PGA Professional Michael Gallagher, Clandeboye GC., was understandably delighted at the speed in which the Series has grown, going from strength to strength to what has become one of Europe's largest junior golf series.

The five events, which were played at golf courses including Rory McIlroy and Shane Lowry's home clubs Holywood and Esker Hills over the summer months, culminated in the final event at Killymoon Golf Club in Co Tyrone. Competitors from as far away as Dubai pitted their skills against the future stars of Irish golf in events which gave a multitude of prizes.

Cian Harkin, Philip Cassidy, Patrick Page and Michael Shiel then immediately travelled to Concra Wood GC in Monaghan to partake in a junior qualifier where Patrick and Cian Harkin made the cut for the last twenty-four and Patrick being victorious in his category.

The lads then travelled to Ballinrobe where Cian Harkin, having led the tournament by two shots through 10th, had a forgettable triple bogey on the back nine to relegate him to third place. The club’s ambassadors then continued on to play Esker Hills Golf course, the home club of Shane Lowry, where Patrick took 4thplace, missing out on top tier by a half point.

But, making amends, it was in Dundrum Golf Club in Tipperary that Patrick won the u18 title before proceeding to a most exciting finale in Killymoon Golf Club where six of the juniors, Patrick Page, Philip Cassidy, Christian Harris, Michael Shiel, Cian Harkin and Ciaran Mc Cormack made it through to their under-age finals.

In the u18 section, Patrick, Michael and Philip competed, with Philip making it through to the 36 holes play-off with a great return of one under over the first 18 holes. But unfortunately a few bogeys on second time out had him lose out on top spot, relegated to second by virtue of B.O.T.

Following this year’s series of Junior Golf, the lads entered a Junior Cup competition in Portsalon Golf Club, organized by Eamon McConigley, in which Patrick Page took top spot in the Shaw Shield with Michael Shiel placed runner-up by virtue of B.O.T.

Cian Page also contested the Kernaghan Cup at the same venue, meeting Ciaran Mc Cormack in the final which went to a play-off hole with Cian taking the honour following his twenty-five foot putt.

Another junior who represented the club to high esteem this season was 11 year old James Sweeney who qualified for the US Kids Golf Euro Championship in Scotland by virtue of acquiring second place in the Irish Qualifier played on the famous Portmarnock Links golf course in Howth, Co. Dublin, in May. James then travelled to play in the knock-out round at Gullane G.C., home of last year’s Scottish Open and will no doubt be seen at Clandeboye G.C. at Halloween.

Congratulations also to junior member Christian Harris who entered the Junior European Open (first staged in 1993) in association with the Daily Express. With the NI qualifier played at Dunmurray GC., Co. Antrim, this tournament is widely believed to be the toughest test in junior golf in Europe as the Champions Week Finals in Andalucia, Spain, are staged over five rounds including Finca Cortesin, 3-times venue for the Volvo World Matchplay. This is an individual stroke-play event played off scratch open to boys and girls and Christian had the unique opportunity to be paired with Irish Girls’ International and Letterkenny G.C. P.G.A. Professional Seamus Mc Monagle prodigé Emma Forbes [5].

There is no handicap limit in this Junior European Open competition and the qualifiers (the top two boys and one girl) from all regional finals go straight to the Champions Week Finals in Spain in November.

On Saturday 24th September, the Letterkenny club’s u16 team played Dunfanaghy GC in the Donegal Junior Matchplay Cup over a two legged affair with the first leg at the away venue where they took a half point from three and in the return match on Sunday 25th at home, put up a very gallant performance, taking two matches but the deficit from the first leg was too much to overcome.

The development of Junior Golf in recent years at Barnhill has been a thoughtful, diligent programme, first implemented in 2011 by former club captain Gerard Duffy and ably supported by Catherine Cooke-Harkin and Mary Fowley. The club have this year introduced  Seamus McMonagle to oversee the further teaching and development of the club’s juniors and Seamus has just announced that he has two of his junior academy golfers chosen for the Ulster elite golf coaching academy at u14 level, an academy set up by the G.U.I. to help nurture future protegés of Irish golf.

Catherine and Mary are also continuing with the groundwork for the development of the club’s youth, both boys and girls, and sure signs of future top amateur golfers have become very much apparent.