While a number of Donegal riders have won stages down the years in the Donegal Three Day, which was established in 1990, no Donegal rider had taken overall victory until today. 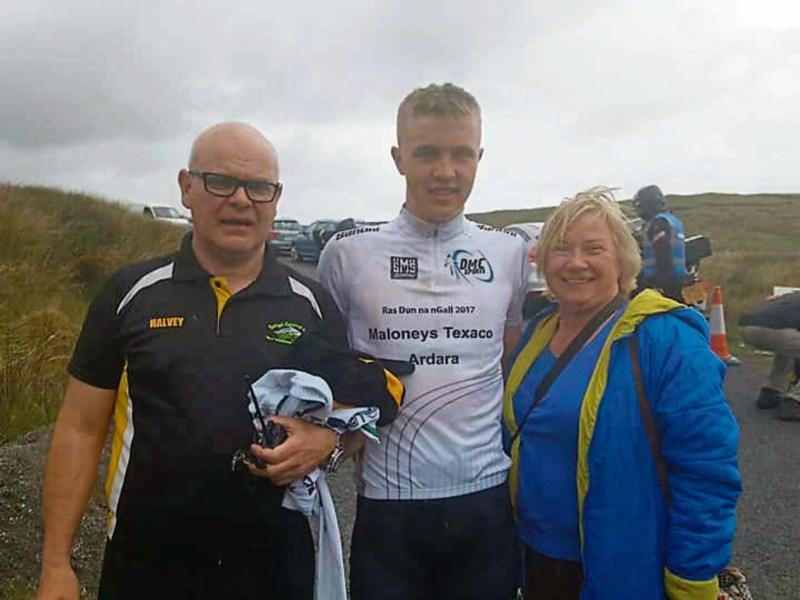 Conor Halvey, winner of the Donegal Three Day, pictured with his parents, Pauric and Angela, at the top of the famous Glengesh climb this afternoon.

The teenager, who started his cycling career with Errigal Cycling Club and is currently part of the Nicholas Roache Performance Team, went into the the weekend event on the back of some solid performances and a good winter's training. And while a number of Donegal riders have won stages down the years in the Donegal Three Day, which was established in 1990, no Donegal rider had taken overall victory until today.

The 16-year-old St Eunan's College student took second place in the 50km stage behind team mate Eoghan McLaughlin on Friday evening after a sprint to the line in Ardara.

Conor finished third in Saturday morning's time trial and took the yellow jersey by just a second ahead of Eoghan McLaughlin and Alexis Roche, son of Tour de France winner, Stephen Roche, who was just four seconds adrift in third.

Yesterday afternoon's stage over 80km saw a change in the standings, with McLaughlin taking the yellow jersey back by two seconds.

Going into today's final stage over 95km, which contained two category two climbs and one category one climb, Conor knew the race would be won and lost at the top of the Glengesh. He managed to get himself into an early break of six riders that stayed away for most of the day. An initial gap of 45 seconds was reduced to ten. A serious push in break left Conor in a group of three heading for the spectacular Glengesh climb and he dug deep, stayed with lead group and secured overall victory with a second placing in the last stage.