Disappointment for Harps on derby night 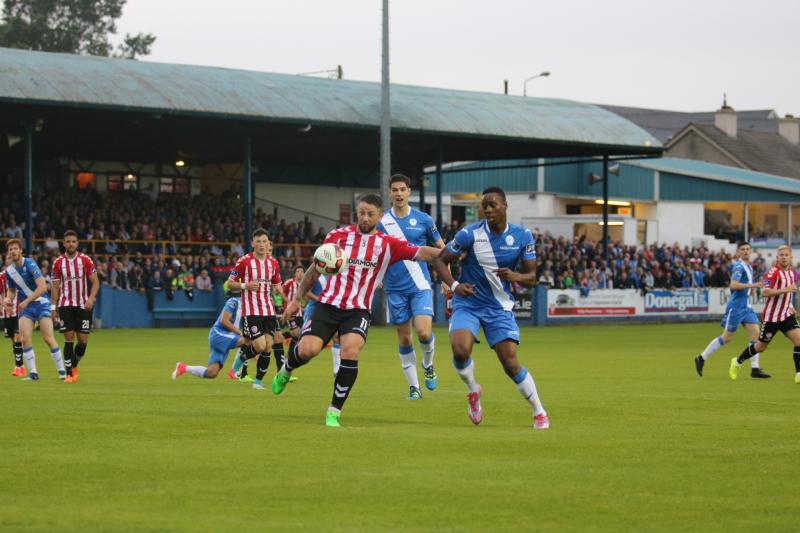 Derry City struck with two late goals to claim the bragging rights in their North West derby clash with Finn Harps in Ballybofey on Monday night.

In fairness to the visitors, they were the better side in the second half and they deserved the win.

But for Harps, it was a cruel way to lose a game in which they more than matched their opponents and created enough good chances of their own.

Both teams made changes for this eagerly awaited North West derby. There was no place in the Harps squad for Paddy McCourt who was suspended for the meeting with his former club.

Meanwhile Derry left out Ronan Curtis for what were termed ‘disciplinary reasons’.

Harps were the better side in the early stages and they created a couple of really good openings. Caolan McAleer was played in by Sean Houston following a quick free-kick but Gerard Doherty was quick off his line to deny the Harps man.

Gareth Harkin was also played in on goal but shot wide of the target while Ibrahim Keita, making his first Harps start, flashed a header wide on 23 minutes.

Derry took a while to settle, but once they did, they looked very threatening coming forward.

Debutante Eoin Toal saw a header drop onto the top of the crossbar from a corner while Aaron McEneff was denied when his goalbound shot struck a defender.

Derry’s best chance of the half fell to Rory Patterson on 36 minutes, but Gallagher saved at his near post from the City striker.

Just before half time, Harps almost grabbed the lead but from a McAleer free-kick, Sean Houston’s bullet header went just wide of the post.

Eddie Dsane and Killian Cantwell both went close for the home side shortly after the break but Derry gained a foothold and they looked particularly threatening from set-pieces.

Patterson and Toal both went closest as they began to turn the screw on Ollie Horgan’s side.

The introduction of Ben Doherty gave City another outlet in attack while BJ Banda was among the subs brought on by Harps.

But just as the game looked to petering out, Derry struck for the opener on 87. Harps failed to deal with a corner and when ball fell kindly to Cole, the former Rangers man was able to hammer it home from close range.

It was enough to send City and their large travelling support, home in happy mood.