Spectators treated to a day of quality action Following on from the disappointment of last year’s Donegal Town Show cancellation due to poor weather, this year’s event ran off very smoothly indeed.
Spectators were treated to showjumping of the highest quality by competitors who travelled from all parts of the north and west.
Local riders included Seamus Campbell riding Killymard Flight and Martin McGowan, who collected a red rosette for 1st place in the 1 metre class riding his grey horse Curtis Cruise.
Conditions in the jumping arena were perfect and thanks are extended to Billy Graham and his family for his continued support of this local show, one of the last few events held on grass in the region.
The 1metre 10 class was an exciting event with Manorhamilton rider Victoria Golden finishing quickest on Bonny Miss Sanco in the jump-off. She was presented with The Brendan Boylan Memorial Cup for her efforts. Convoy’s Ellen McCollum came 2nd riding Terry’s Moyar.
The next event, the 1metre 20, saw the Seamus Campbell Memorial Cup being presented to Alison Irwin riding Bunagh Hill with Ballybofey’s David Mulrine finishing 2nd on Ardmiran Rosco.
Course builder Nigel Jess set up a difficult test for the final class of the day, the 1metre 35 Mini Grand Prix and a delighted Victoria Golden picked up her second big win of the day. Derry’s Sean Nangle, son of Donegal Town native, the late Jimmy, finished 2nd riding Calle.
All in all, this year’s show at The Holmes proved to be another successful event on the equestrian calendar.
Thanks to judge Caroline Quigley and all the volunteers who worked tirelessly to ensure a great day’s showjumping.
In particular, the organisers would like to acknowledge their loyal sponsors whose support keeps this traditional show rolling on from year to year. These include Seaview Vets, Dom’s Pier 1, Glebe Builders, Abbey Hotel, Harvey’s Point Country Hotel, Ashtree Garden Centre, Aidan McGroary, Donegal Town Hardware and DIY, Mickey McIntyre’s Filling Station, Old Church Vets, Seamus Sheerin’s Co-Op, William Gibson’s Agri-Stores, SuperValu, Finn Valley AC, Deane’s Equestrian Centre, Donegal Tyres and Christopher Kennedy Supplies. 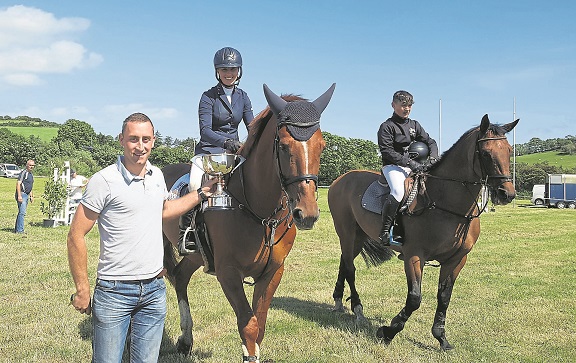