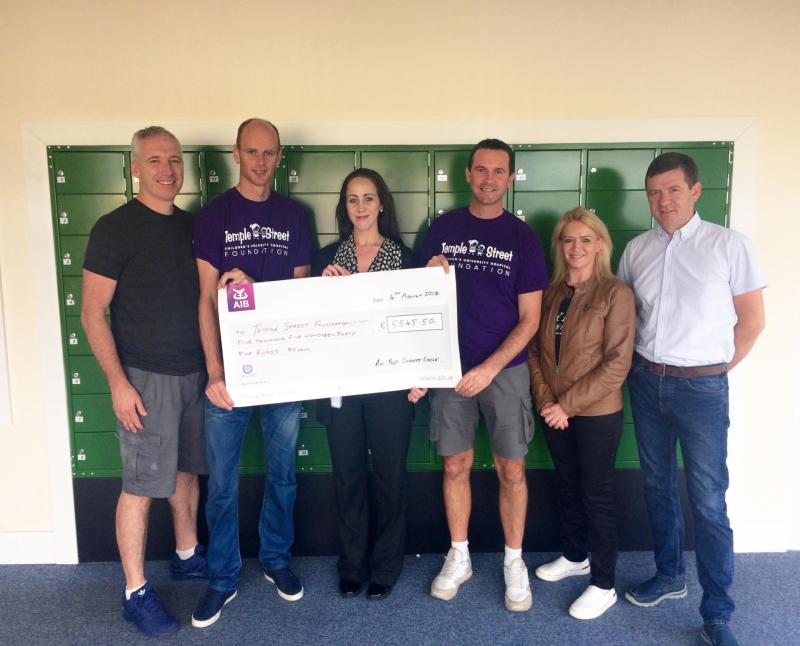 Paul Crampsie, Martin McGinley, Paul Lynch and Paul Herrity from An Post Letterkenny recently took part and completed in a 555km cycle along Donegal’s Wild Atlantic Coastline in the Donegal Atlantic Way Ultra Race.
They entered their 4-man team to hopefully raise awareness and some funds for Temple Street Children’s Hospital.
Paul Lynch and his wife Laura Lynch live in Rathmullan and have a little girl , Éabha, who is just 22 months old.
She was born with a rare genetic eye condition called Blepharophimosis, ptosis, and epicanthus inversus syndrome (BPES). Éabha was diagnosed at seven weeks by Professor O’Keeffe, an Ophthalmologist at Temple Street’s Childrens Hospital with this condition.
To date she has undergone several surgeries on both her eye lids. Her vision is impaired and her eye lid muscles will continue to fall which is why she will need surgery for the rest of her life to keep her eye lids open.
Éabha regularly attends the Nurologist, the Speech & Language & the Dietician clinics at Temple Street, all of which is an important part of Éabha’s recovery after and before her operations.
The team at Temple Street Children’s Hospital have given amazing support and the Lynch family are so grateful and delighted to be able to give something back to the hospital.
Paul Crampsie, Paul Lynch, Martin McGinley and Paul Herrity and Laura Lynch would like to thank everyone who donated in any way, however small to their recent fundraising efforts.
They would like to thank their families, work colleagues, friends and anyone who helped in any way, especially Liam O’Hara, O’Hara & Harrisson Electrical who crewed for them for the race, Tony Duffy, Mark O’Hara and Grace Ann McGarvey who looked after the social media and PR for the event and charity fundraiser.
Speaking on behalf of Temple Street Children’s Hospital, Caroline Feely said: “We are so grateful to the four lads and their families for taking part in this challenging 555k endurance race and we are delighted that they have presented us with €5,545.50 for our Temple Street Children’s Hospital Charity.
“We have lots of little troopers and fighters at Temple Street and everyday we see families face challenges that we can’t even imagine.
“Yet these kids continue to smile up at us, so for us to see very child get state of the art equipment, support and help through our charity that they deserve during their visits and stay, makes our work worthwhile."
To date the An Post Letterkenny team have raised over €60,000 for Donegal Hospice by organising Charity Cycles every year in memory of their work colleague Tadhg Culbert.
They will be organising the next Tadgh Culbert Memorial Charity Cycle in the coming months, details will be released soon.