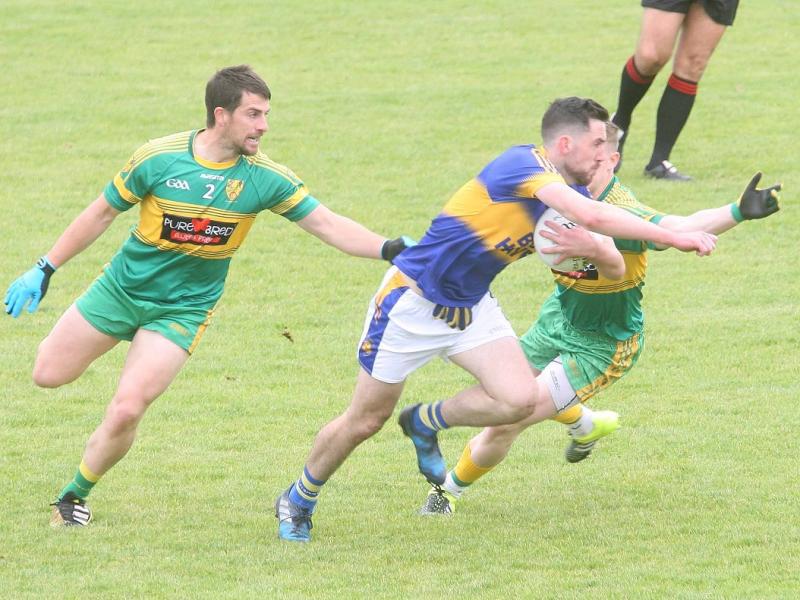 Kilcar made it two wins from as many outings in this season's Dr. Maguire race as they easily saw off the challenge of Ardara yesterday afternoon.

Ardara's obvious game plan was to make their physical advantage count. But Kilcar were just too elusive and, in truth, too good.
It was they that set the pace from the very off. A generous free awarded to Ryan McHugh afforded Patrick McBrearty the easiest of opportunities to float over the opening score of the contest on two minutes. The visitors – last year's defeated county finalists – were wasteful in front of the posts in the opening quarter with five wides accumulated kicking against the breeze.
Conor McShane impeded CJ Molloy up the other end and from the resulting free Gareth Concarr tied matters up. With the Towney men continuing to dictate the pace and dominate possession, Conor Doherty cut in along the endline to fist his side two clear.
On the quarter hour mark, Kilcar stole a real march when McBrearty raced in from the wide right before unleashing an unstoppable drive high and into the roof of Cathal Gallagher's net.
With the parameters narrowed in Pearse Park, Adrian Brennan's men were looking to make the power of their pack and their vertical advantage felt. Credit to Kilcar, they admirably weathered that approach as Pauric Carr stroked out a fine John Ross Molloy effort and four remained the difference.
Eoin McHugh and minor Brian O'Donnell added overs for the visitors as they jumped to 1-5 a minute out from the break. Lorcan O'Donnell did manage to fire over a '45 just before the midpoint.
Indeed, Ardara could count themselves very fortunate not to lose the services of Ryan Malley when his high hook on Eoin McHugh only received a booking – an incident that the majority of the pressbox predicted would result in a black card.
Half-time: Kilcar 1-5, Ardara 0-4.
Mark McHugh, stood up by Conor Classon, showed the hosts how to manipulate the elements as Kilcar increased their advantage out to five at the beginning of the new period. Concarr responded with another free.
Then, on 37 minutes, Ryan McHugh blazed a trail right through the heart of the Ardara rearguard. With brother Mark and cousin Eoin for company those two combined beautifully and the latter crashed a second Kilcar goal in off the underside of the crossbar.
A bust up – a right old schmozzle around the middle of the park – was sanctioned when the dust finally settled with CJ Molloy flashed a black and subsequent red card. Kieran Breslin followed his skipper as he was also dismissed.
Down to 13 men, Ardara still managed to muster a goal themselves as John Ross Molloy's determination was rewarded when he palmed home to the back of the net. Concarr quickly added a free as 2-8 played 1-6 with four mintues of play remaining. Kilcar had the luxury of introducing Ashley Carr into the mix late on and he made his presence felt with an instant contribution.
With the embers dimming, Patrick McBrearty rounded off a fine afternoon for his side as he nailed on a third goal right at the death.