Event will raise funds for BUMBLEance 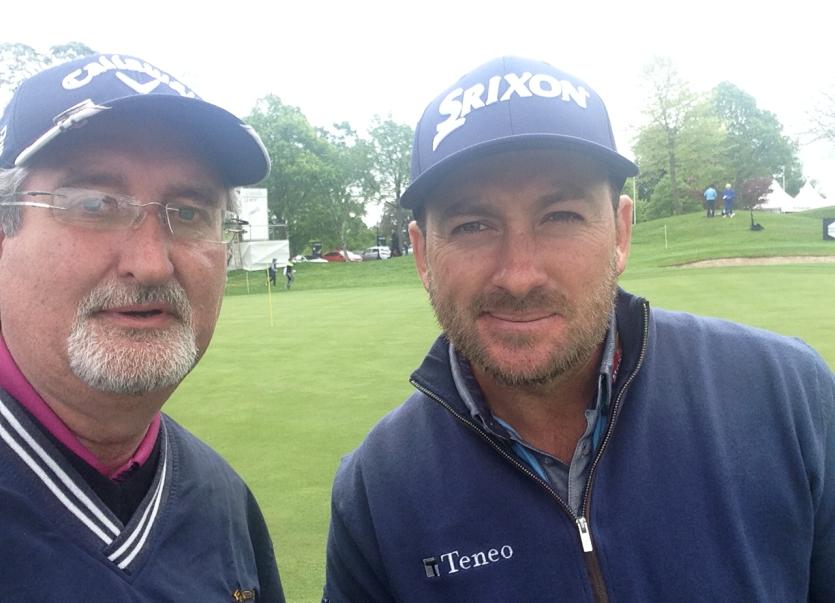 Eamonn Davis and Graeme McDowell, one of a number of top golfers to sign a golf bag which is one of the many prizes on offer in the charity draw.

A host of top local entertainers have signed up to perform at a special charity event in Letterkenny next Thursday, April 19th.
The event is being organised to raise funds for BUMBLEance with a grand charity draw and a comedy and cabaret night all taking place in the Mount Errigal Hotel.
According to event organiser, Eamonn Davis, it promises to be a night to remember.
“I had intended having just a musical group and the draw itself, but as soon as word got out, a few people contacted me to offer their services for the night,” he said.
Among those who will perform are singer, Anne Biddie from Fanad, and Letterkenny comedian, Andy McGranaghan, fresh from his successful appearance on Ireland’s Got Talent.
“I bumped into Internationally renowned comedian Conal Gallen from Ballybofey and having explained what I was organising, he immediately came on board,” Eamonn added.
“Even though he has an appearance in Galway on the Friday, he will be travelling there immediately after the show.
“Also appearing will be well known local band Tuscany with lead singer Roseleen and another local singer from a well known musical family, Sinead Black, who is also making a name for herself on the local country music scene.
“But, it doesn’t stop there, as I am also proud to announce that singing sensation of the 70’s, Letterkenny native Evelyn of the Envoys Showband is only too happy to finish the night off with a dance, singing all of the 60’s and 70’s hits.
“But before that, we will have the two local finalists, and indeed the winner, of TG4’s biggest televised country music competition, Glór Tíre, local lads Conor O’ Donnell (Dungloe) and winner Gary Fitzpatrick (Bridgend). Free
Admission is free on the night with donations at the door and all proceeds from this and the draw will be donated to BUMBLEance, the sick children’s ambulance service.
There is a wide range of prizes (up to 20) available, and tickets for the draw are €10 each. Top prizes include a golf bag autographed by a host of top European and International golfers, an original painting by internationally renowned artist Stephen Bennett, a stay in Mc Gettigan’s Bonnington Hotel in Dublin plus two return flights from Donegal Airport, an original landscape painting by well known Donegal artist Dolores Dunleavy from Letterkenny and many, many more prizes, such as numerous meal vouchers from local hotels and restaurants and, for the golfer, many fourball vouchers for various golf courses in Ireland.
For more details contact Eamonn on 086 8238753.