Trio return for visit to Finn Park this week 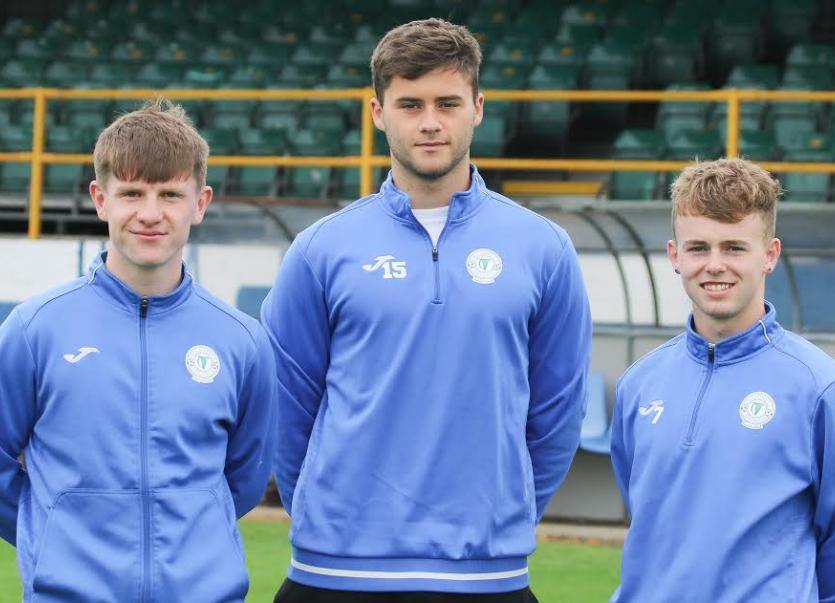 Former Finn Harps players Shane Blaney of Doncaster Rovers, Marc Walsh of Swansea City and Conor O’Reilly, who has recently signed for Ipswich, returned to their former club earlier this week to reflect on their time at Finn Park and spoke about their new lives in the challenging world of professional football abroad.
All three spoke highly about their formative years at their schoolboy clubs Illistrin FC, Gweedore Celtic and Bonagee United, before signing with Harps underage. Here they further developed their game playing against Ireland’s elite young talent in the SSE Airtricity U17 and U19 leagues, enhanced with further experience gained at Intermediate level playing with the club reserves in the Ulster Senior League.
Shane Blaney, who broke through to the Harps senior team towards the end of the 2017 season secured a move across the water when the Letterkenny man signed for League One side Doncaster Rovers in January. And while he concurs with the view that adjusting to the demands of full time training takes time, it’s a process he is enjoying.
Shane said: “Adapting to the physical challenge of training most days and the increase in the strength and conditioning work were the biggest change when I joined Doncaster. However, everyone is very helpful here and I feel I have settled well into both the club and the community. There is a lot of talented players in the SSE Airtricity U17 and U19 league’s so I think it was a great platform for me to develop which eventually led to me training and playing with the Harps senior squad which was invaluable experience.”
Winger Marc Walsh who has been a regular choice for Ireland underage squads in recent years is enjoying life at Swansea City following his move to the Liberty stadium last Summer. “It’s so hard to believe I made the move almost a year ago! In the beginning it was obviously a big transition because mentally and physically you are adapting to full time training. Swansea create an environment where everything is very professional and geared towards you succeeding so I am determined to keep working hard and hopefully I can keep progressing.”
“Playing on the national stage with Harps was a vital part of my pathway to professional football. The training sessions with Harps underage head coaches Declan and Joe Boyle were very focused and I think my game benefited hugely from my time at Finn Park “, Marc continued.
Midfielder Conor O’ Reilly played his last game for Harps U17s recently before signing for Ipswich Town, as he played a starring role in a 4-0 victory for Declan Boyle’s charges against Derry City at the Brandywell in the Mark Farren Cup. Conor knows the Portman Road club very well having trained with the club off and on in recent years before officially signing in the last fortnight.
Conor says: “Because I have been over there six or seven times I know the people and the set up there so when I move over permanently in early July I feel I can settle in quickly and get down to work. I am really looking forward to getting started and keep improving my game. Hopefully with hard work I can progress through the levels at Ipswich and also add more international experience to my CV in the coming years. The last few weeks I was delighted to be asked to attend first team training at Harps, which was a great way to complete my time at the club. Since I joined Harps the experience of training and playing under Declan and Joe has been fantastic. They gave me targets to reach and gave excellent feedback, which is vital when you are an underage player who is looking to constantly improve."
Finn Harps youth Development Officer James Rodgers said: “At Finn Harps we work hard to create an environment where talented and focused young players can reach their potential. Our coaches speak very highly of the application and good character Marc, Shane and Conor displayed during their time at Finn Harps and everyone at our club will continue to take great pride in their progress."