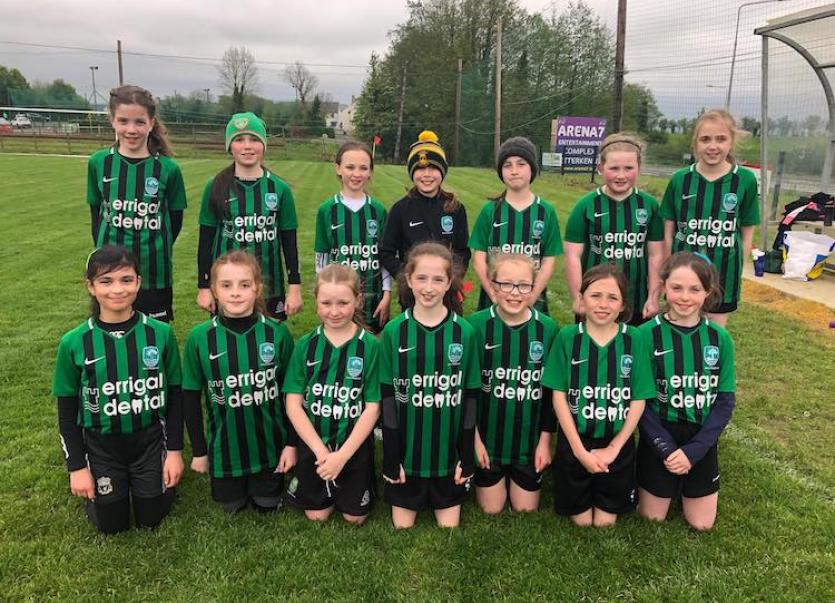 Swilly started very strong with chances from both Kelsey McAteer and Hannah O’Carroll. Great work in midfield from Anna McFadden and Nicola Irwin sent McAteer through and she got her first goal on the 18th minute.

Bonagee’s defence was strong and managed to hold Swilly off until just before half time when McAteer was again on target.

Bonagee had a few chances in the second half, Millie Patton and Amy Callaghan being particularly strong.

Swilly again pushed forward and got their third goal from the left foot of Hannah O’Carroll.

Caitlin Hume held strong for Bonagee’s defence, but a great goal from the hard working Caitlin Doherty made it four for Swilly.

Illistrin 2
First half goals from Eimear Molloy and Kate Malone helped Illistrin to all three points against a Raphoe side who could easily have earned at least a share of the spoils in a super game at Deele College.
There was little between the sides throughout but it was the visitors who took the lead when a mix up in the defence saw Eimear Molloy prod the ball goal-wards and it ran over the line despite the best efforts of the home side to prevent the goal.

That was in the 10th minute and Illistrin doubled their advantage 10 minutes later when Kate Malone got on the end of a fine cross to steer the ball home.
Raphoe were playing well thought, Alicia McCullagh and Cliodhna Kelly linking well in attack and Cara Eaton, Niamh Toye and Kelsey Park all battling hard for the home side.
The hard work paid off in the second half when they were awarded a penalty for handball which Cliodhna Kelly tucked away to leave just one between the sides.
The visitors defended brilliantly after that though and were always dangerous on the break and in the end Raphoe just couldn’t find a way through as Illistrin held on for the win.

Despite conceding the goals Ballyraine girls kept trying to do the right thing, playing nice following football during parts of game and there was a great performance by the Ballyraine keeper.

Both teams, kitted out in black and white, put in a determined effort from the get go and Maeve Sweeney saw her efforts rewarded in the 12th minute when her shot found the back of the net.

At half-time, the score stood at 1-0 to the visitors and it was all to play for.

Strong performances from Kaylagh Sweeney, Clodagh Gibbons and Lucy McGonagle for Mulroy kept Kilmacrennan at bay whilst Katie Shovelin put in a tremendous performance throughout. T

he second half saw Alisha Gallagher break for Kilmacrennan on a number of occasions but - thanks to some good defending from Leah Roche and Caoimhe McLaughlin as well as Mary Bridget McGeever in goals - her efforts were fruitless.

The Mulroy girls are delighted to welcome back Ella Martin who has been out of action due to injury. An India Falls - Doherty goal after five minutes give Finn Valley the perfect start and Grace McGinty added a second with a fine finish.

Amy Dorrian scored a third just before half time.

Milford battled hard throughout the game and were always a threat, but Valley scored two quick goals in the last 15 minutes with Abigh McMenamin and Caoimhe McNulty - with the goal of the night - scoring.

Ward netted a classy hat-trick as she maintained her excellent goal-scoring form.

Brianna Ferry bagged the other goal for the west Donegal girls.