FAI Grassroots Award given to Fr. Michael Sweeney in recognition of his input to soccer in Donegal 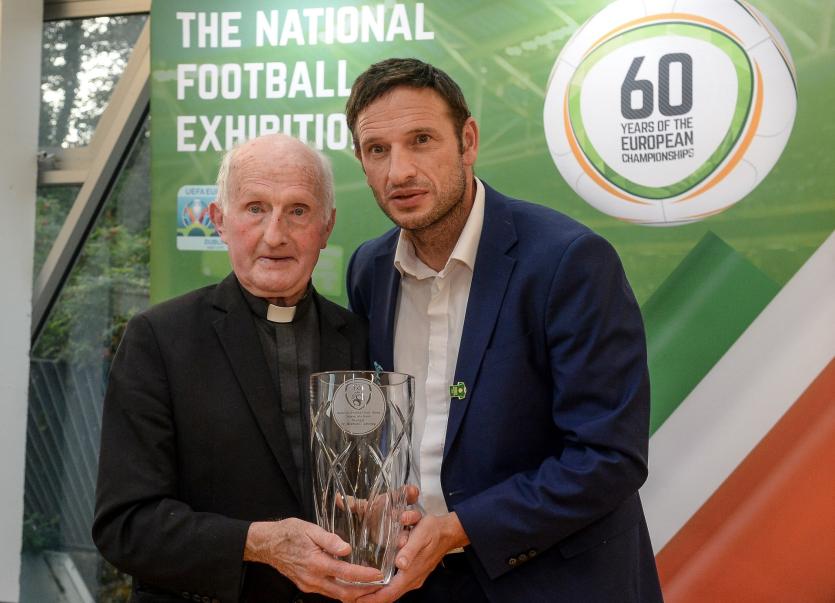 Fr. Michael Sweeney has been given a special award in recognition of his huge contribution to soccer in his native Donegal.

Fr. Sweeney is a founding member of Fanad United, the Donegal League and Ulster Senior League.

Among the guest speakers for the launch was former Republic of Ireland and Liverpool star Ray Houghton who is a National Football Exhibition Ambassador.

The free exhibition runs until September 29.

In order to promote the UEFA European Championships coming to Dublin in 2020 - with four games set to be played at Aviva Stadium - the Football Association of Ireland, Dublin City Council and The Department of Transport, Tourism and Sport joined forces to create a National Football Exhibition.

The Exhibition provides free access to anyone interested in learning about 60 years of the tournament, reliving some golden Irish footballing memories, discovering rare memorabilia, programmes, jerseys and artefacts, and having fun with the interactive stations and a photo-booth.

The Exhibition is made up of six zones, with each zone designed to give you an overview of the various different aspects of football in Ireland, the impact this has around the country, some of your favourite and most memorable National and International moments and a look at some of the most iconic moments over the last 60 years of the EUROs. The zones will be made up of memorabilia displays and interactive stations with videos, quizzes and an opportunity to step up to the mic and record your own commentary.

Letterkenny is the fifth of seven different venues around Ireland to stage the exhibition.

A National Football Exhibition App is available to download.