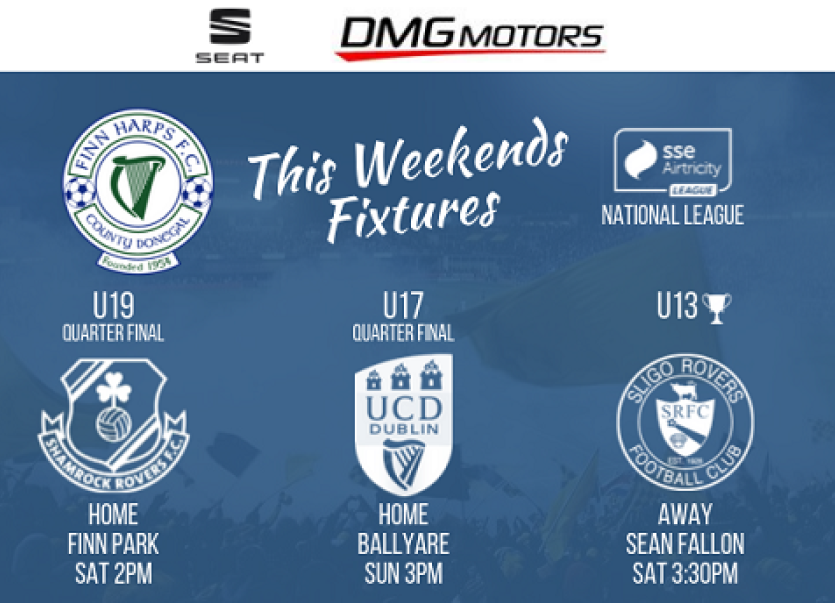 The Finn Harps U19s take on Shamrock Rovers at Finn Park on Saturday in a National League quarter-final, fresh from a 3-0 win over Dundalk last weekend.
The Dubliners finished third in the Southern section having been pipped to second by Waterford on goal difference. Harps will do well to contain Thomas Oluwa, who has notched 17 goals for the Hoops in the regular season, while Jamie Browne leads the way for Harps with a hat trick last weekend bringing his total for the year to 13. Rovers last league outing was a 1-0 home defeat to Bray Wanderers.
Manager Joe Boyle is looking forward to the game, "Last week's match v Dundalk was an important victory and we were very pleased with the performance levels, although there is always room for improvement.
Shamrock Rovers U19s will probably consider themselves unlucky because they lost out on second place in the Southern group on goal difference and their recent form has been very good. They have a lot of talent in their side but so do we, so I would encourage people to come along on Saturday and get behind the lads and enjoy what should be a very competitive quarter final."

Harps U17s face UCD this weekend in Ballyare
Like the senior team, the Harps U17s face UCD this weekend, in this case in a National League quarter final which takes place at Ballyare at 3pm on Sunday. A win in Dundalk secured second place in the Northern Section for Harps, one point behind table toppers Bohemian FC. The visitors finished third in the Southern section with their last game resulting in a 3-2 defeat by Cabinteely.
Luke Rudden tops the scoring charts for the Harps with 14 goals in this campaign to date. Harps are of course defending champions at this level having won the U17 title against Shamrock Rovers last year on a memorable day in Maginn Park.
Declan Boyle knows his charges need to be at their best this week, "We were delighted to secure second place in the match away to Dundalk last week and I thought we deserved the victory considering the amount of chances we created and our defending was solid for most of the match. We have been preparing all week for another tough task on Sunday, because UCD are always strong at underage level. If we can maintain our recent form we can approach the match with some level of optimism, but we know from our experience of play-off stages, you have to play to to your full potential because every team finds their peak level."