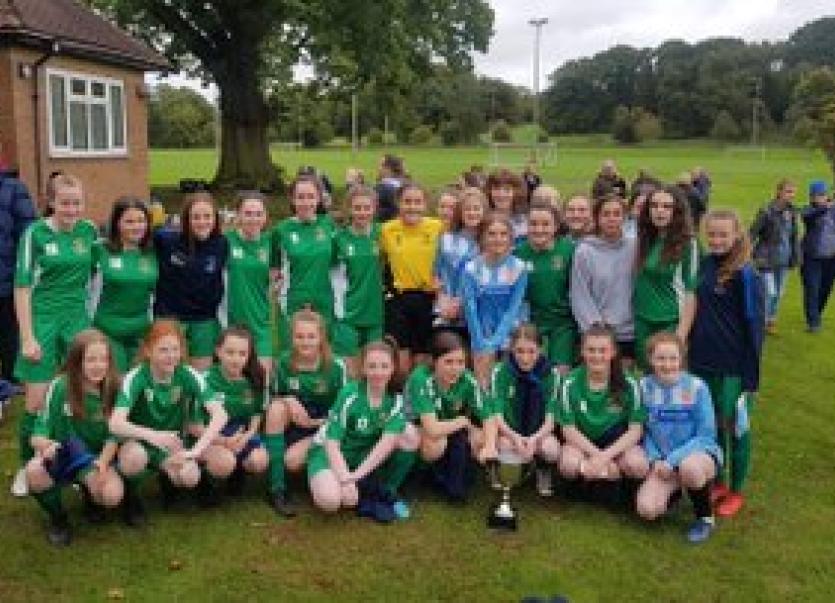 A Donegal school has been crowned the Schools Association Football International Board  Rod Houston Cup Champions for 2019 in Lilleshall this morning following a 3-1 victory over Welsh outfit Ysgol Glan Clwdy, Saint Asaph.

Conor Doherty’s Carndonagh Community School side were in a commanding position heading into the final game following comprehensive victories over their English counterparts, defeating Crompton House School 4-2 in the opening game on Wednesday.

This was followed up with an impressive 4-0 win over Shenfield High School, Essex.

The game was scoreless after ten minutes with the best chance coming from Ellie Long’s set piece, her effort from 25 yards out smashed off the crossbar.

However, the deadlock was broken four minutes from the interval when Seaneen Crumlish produced a beautifully weighted ball to the feet of the dynamic Ailish Doherty to slot home.

Alana Brennan was on hand eight minutes into the restart to double the Irish girls advantage with a brilliant goal to take it to 2-0.

The Welsh fought to get a foothold on proceedings and their good work was rewarded a few minutes later when Egan Galeandro pulled one back, 2-1.

The contest was wrapped up ten minutes from time when the impressive Ellie Long turned supplier for Ailish Doherty’s second and Carndonagh’s third of the morning.

The Welsh keeper Doran was outstanding throughout the game and her heroics ensured the game ended 3-1 after a pulsating contest.

The Carndonagh girls will be celebrating tonight following their sensational performances, amassing 11 goals in three games and only conceding three - a testament to Sue Lafferty and her defensive team.

The goal scoring prowess of Ailish Doherty saw her goal tally finish with six while Alana Brennan converted three, two of which were from her weaker peg!

Carndonagh join Presentation Secondary School, Kilkenny in the history books as Champions of the British Isle Cup. The Cats having secured the silverware in 2017 while previous contestants Sacred Heart School, Westport (2018) and Ursuline College, Sligo (2016) were runners up. A superb record for Irish schools at this level.