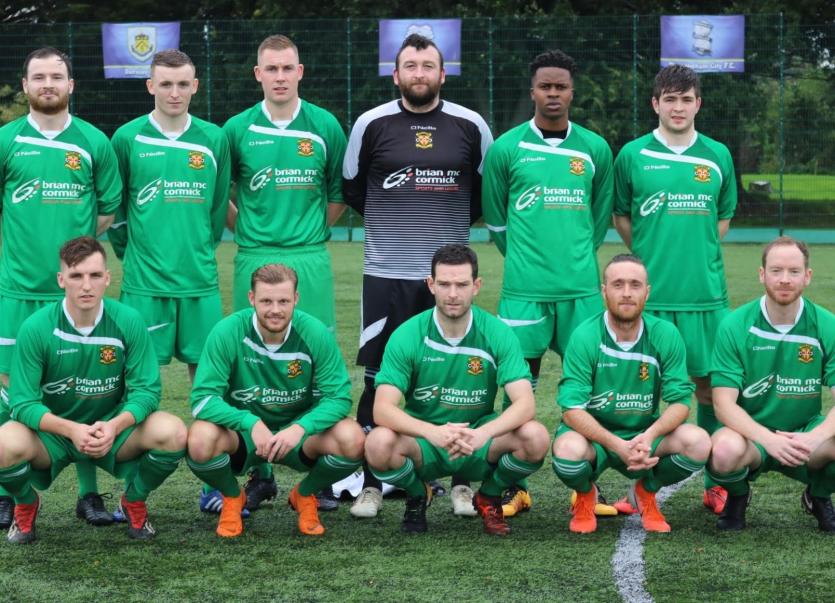 The Ulster Senior League side that played in Dublin. Photo: Stephen Doherty

Goals from BJ Banda and Michéal Doherty weren’t enough on the day.

On Sunday, Ulster play Leinster with nothing more than pride at stake.

Ulster’s first real change of breaking the deadlock was when Stephen Duffy shot from 20 yards out by the Munster keeper Brendan O’Connell made an excellent save.

It wasn’t until the 26th minute that the game came to life. Sean Hume passed the ball down the left hand side of the pitch to BJ Banda and the Letterkenny Rovers front man raced into the box to hammer home past O’Connell.

Ulster were playing well in this period but disaster struck for Anthony Gorman’s side just before half-time.

Peter Doherty was unfortunate to put the ball into his own net in the 43rd minute and almost immediately after that Munster took the lead through a header from Ethan Hurley.

Gordon Walker made it 3-1 to Munster with a powerful header past Gavin Cullen in the 58th minutes and it looked like it was game over at that stage.

Munster had a man sent off for two bookable offences and Ulster took advantage of this in the 79 minute when Michéal Doherty scored to make it 3-2.

Munster held out for all three points tough in a game which was played throughout in monsoon like conditions.