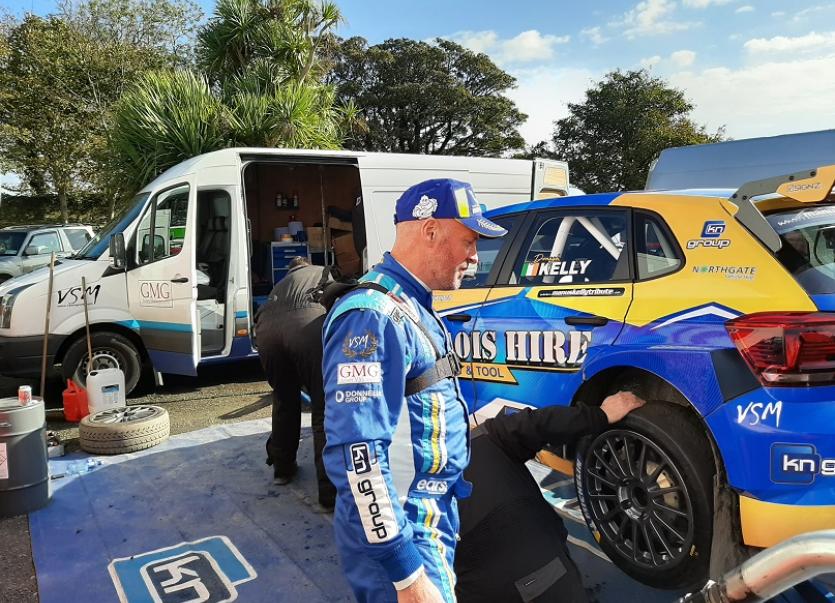 Donegal’s Donagh Kelly and his Monaghan co-driver Conor Foley in a Volkswagen Polo GTi R5 won the Fastnet Rally in Bantry, the final round of the Triton Showers National Rally Championship.
They finished 37.1 seconds ahead of the Ford Escort of Donegal’s Damian Tourish/Domhnaill McAlaney with Welsh driver Mel Evans and co-driver Patrick Walsh in a Skoda Fabia R5, 50.8 seconds further behind in third.
Donegal’s Kevin Eves (Toyota Corolla) and co-driven by Chris Melly, who was eighth overall, did enough to clinch third overall in the Triton series and also won the rally.ie award (top two-wheel drive) within the eight round series.
Meanwhile, Donegal’s David Kelly (Toyota Starlet) co-driven by Kenny Bustard, won the Junior event and also clinched Class 16A within the Triton series.
On the opening 15.8 kilometre stage that skirted along the Wild Atlantic Way on the Mizen Head peninsula, Kelly was two seconds faster that last year’s winner and fellow Donegal man Damian Tourish (Ford Escort) with Bandon’s Vincent McSweeney (Mitsubishi Evo) leading the local challenge - 5.6 seconds further behind in third followed by former Fastnet winner Daniel Cronin (Ford Fiesta R5), who was just a tenth of a second further adrift but was concerned with an overheating issue. Yet another Fastnet winner, Welsh ace Mel Evans (Skoda Fabia R5) and Cavan’s Chris Armstrong (Ford Escort) completed the top six.
McSweeney and Cronin departed the fray on the second stage, Mount Gabriel, where they both crashed out as Kelly stretched his advantage over Tourish to 15.5 seconds. Although Evans moved into third, he was 19.2 seconds further behind
Kelly and Tourish were both credited with the same time for the stage at Mount Kid.
At the Bantry service rally leader Kelly remarked that he had opted for a tyre compound that was far too soft for the opening stage while he had a few moments on the second stage. Tourish reckoned that the second stage was very tricky and he wasn’t as quick as he was the previous year. Evans, 21.6 seconds further behind in third was untroubled but admitted he lacked match practice. The Escorts of Gary Kiernan, Chris Armstrong and JF Shovelin completed the top six.
Kevin Eves reckoned a change of springs for the previous rally didn’t suit the West Cork terrain and having lost time opted to concentrate on securing third overall in the Triton series and also claiming the rally.ie award for the top two-wheel drive in overall standings. The remaining places in the top ten were annexed by Monaghan’s David Moffett (Toyota Starlet), Donegal’s Aaron McLaughlin (Ford Fiesta R5) and Cork’s Daragh O’Riordan (Ford Escort). Having finished the opening stage in eighth place, Carlow’s David Condell plummeted down the order when he slid his Proton Iriz R5 off the road albeit with superficial damage. Paul Barrett retired his Fiesta R5 with a water leak
Out on the repeat loop Kelly took total command and with gains of 8.2 and 7.9 seconds on stages four and five respectively, he arrived at the final service in Bantry leading Tourish by 31.6 seconds, the latter was the quicker on the pair albeit by a tenth of a second on S.S. 6, Mount Kid. Having used a soft Michelin tyre on the opening loop Kelly decided to try a medium compound Pirelli for the second loop. “The car is getting better at every corner, it’s brilliant.” Kiernan slotted into third but admitted he lost too much time to Tourish to force a proper challenge, Evans was 1.1 seconds further behind as Armstrong and Eves rounded out the top six. The rest of the top ten spots went to Shovelin, McLaughlin, Moffett and O’Riordan, all of whom were untroubled.
Kiernan retired from third pace on the penultimate stage with a broken rear differential. While Kelly went on to claim the spoils and give the VW Polo GTi its first Irish national win, he backed off on the final pair of stages as the car felt somewhat twitchy “I’m not sure what it was, it’s either suspension or alignment, it’s just some wee thing that was making the car nervous. It was perfect before that so we just took it handy.”
Following Kiernan’s demise, Evans slotted into third with Armstrong, David Moffett and JF Shovelin rounding out the top six. Donegal’s Aaron McLaughlin (Fiesta R5) was next in a top ten that was completed by Eves, Daragh O’Riordan and Kevin Barrett (Subaru).