If more funding does not come, existing structures will soon not be fit for purpose 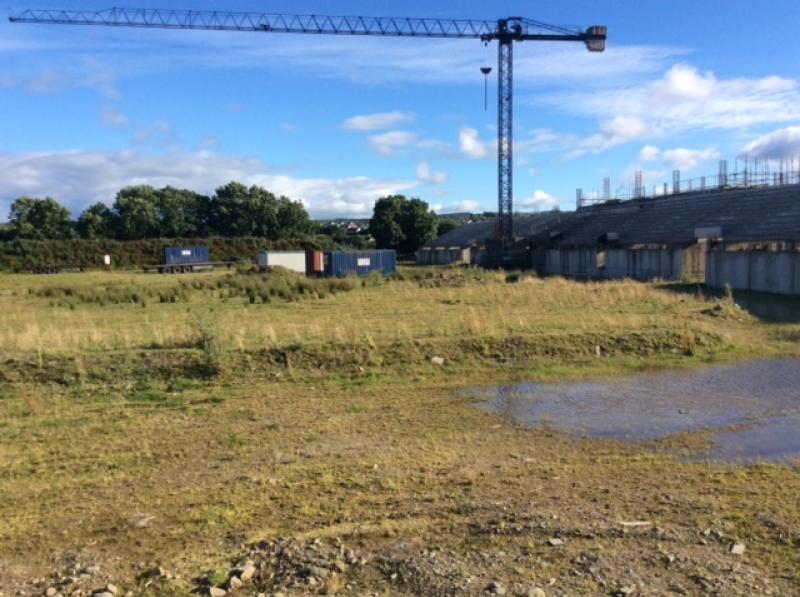 If the government fails to grant-aid the Finn Harps stadium project in the near future, over €1.2 million of taxpayers’ money will have been wasted, it has emerged.

Harps’ ambitious plans for a new stadium date back to 2007 when planning permission was first granted.

Around €1.2m has been spent on site clearance works at the new ground in Stranorlar, where part of the planned main stand and administration block has been built.

But with only limited work done since 2014, what is there has deteriorated.

Indeed, according to Ballyshannon-based Paul McLoone, who is leading the stadium project, “the structure will soon be not fit for purpose.”

And if it is left in its current state for much longer, what is there will have to be demolished before any new work can continue.

The stadium debacle is now really coming to a head, and with a general election on around the corner it is set to become an issue for sports followers in Donegal, not least because there is a real feeling that the county is being neglected and is not getting its fair share.
“The government needs to make its intentions clear about what it wants to do with this project,” McLoone said.

And he added: “If it is approved, we can start work on the site tomorrow.”

Last week, the club was rocked by the news that it has not been included in the latest round of major sports capital grants, despite the feeling locally that everything was in order.

However, it has now emerged that the Harps application and economic appraisal has been referred by the Department of Transport, Tourism and Sport to its Strategic Research and Analysis Division (SRAD).

Significantly, so too have all 25 of the projects that are set to get grant aid. Not one of them is in Donegal.

As McLoone explained, in effect the grant aid announced was provisional and they are subject to approval by SRAD. The good news for Harps is that at least the club’s application is still being considered.

However, one wonders why it was not included in the same list as the other 25 projects.

The hope is that with a little political pressure - not to mention the general election - that the Harps project may yet get the thumbs up for the state funding sought.

Speaking at the club’s pre-season press conference in Letterkenny on Tuesday, McLoone re-iterated that there was a 100% state funding agreement in relation to the proposals, and that the project team had been expecting positive news.

Last year, €180,000 was sanctioned by the Department to allow Harps to compete design works on revised plans.

This would enable the construction of a main stand with administration block and changing facilities, the laying of the pitch, floodlighting, security fencing, turnstiles, and car parking.

Speaking to Donegal Live, McLoone confirmed that the terracing behind both goals would be developed by Harps through the club’s own fundraising efforts, and would be constructed in such a way that a roof could be added.

The planned stand opposite the main stand would also be developed by Harps, and would be something similar to the second stand at the RSC in Waterford.

He also revealed that the club is working on leasing additional lands with the intention to develop additional pitches and training facilities.

So, as things stand, the Finn Harps stadium project is not dead in the water - and with the general election looming the lobbying is set to intensify to get the vital state cash injection required to get construction work underway.
It’s a case of watch this space.