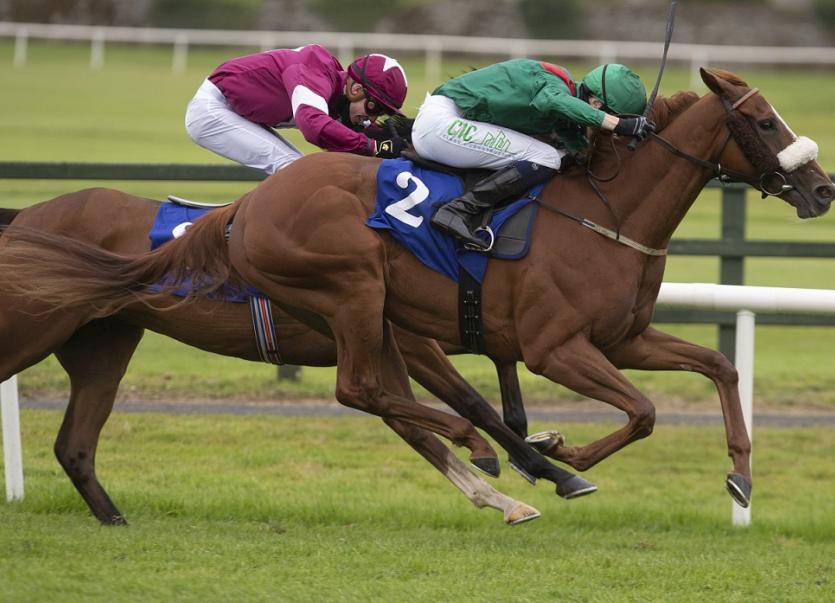 Ebendi (nearside) gets the better of Pugin to win for Oisin Orr and Dermot Weld at Killarney on Monday. Photo: Patrick McCann/Racing Post

Oisin Orr and Dermot Weld continued their great run of form when winners again at Killarney on Monday evening. They won the 11f median auction maiden with Ebendi, owned by HH The Aga Khan. The 17/2 chance wore down 4/6 favourite Pugin well inside the final furlong to score by half a length, giving Orr his 11th success of the season.
Both Orr brothers were among the winners at Wednesday’s meetings. Conor enjoyed a Downpatrick success when the Noel Kelly-trained James Boru, owned by Victor McCrea, won the opening division of the 2m6f handicap hurdle while Oisin’s winner came at the opposite end of the county where he partnered the Dermot Weld-trained Haparanda, the 16/5 favourite, to win the 11f handicap by an easy two and a half lengths. Dylan Browne McMonagle also enjoyed a Killarney winner and he partnered the Paul Sweeney-owned Harvey Specter to win the 11f handicap for County Kilkenny-trainer Dick Donohoe. The 8/1 shot had plenty in hand as he beat Denis Hogan’s 4/1 chance Drummer by two and a quarter lengths.