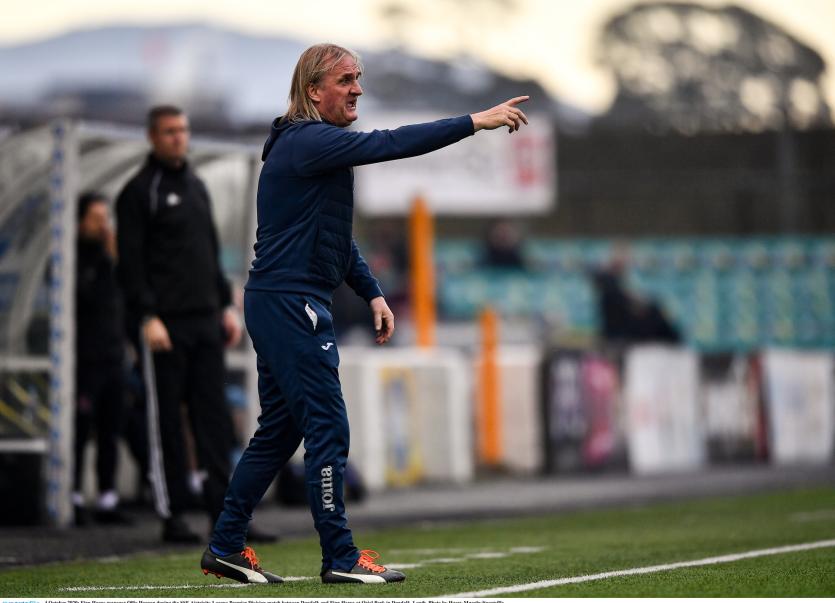 The drudgery of the pre-season is the bane of Ollie Horgan's life. The Finn Harps manager readily admits that this is the part of team management that he could live without.
But as part of his job, it has to be done. When I contacted him this week, he was driving (he is rarely off the road, planning for the year ahead). But despite that, conversations with Ollie Horgan leave you refreshed and upbeat.
And when listening him in interviews after Finn Harps games, he comes across much different, always playing things down, not getting ahead of himself, even after a good victory.
He just has an infectious nature and his drive for the game he loves still burns brightly.
I was checking back on where Harps were at regarding players signed for the new season in December of last year and I put it to him that they were slightly better off as regards numbers who have put pen to paper.
On December 22 last year, Sam Todd had signed to make it eight players on the books for the 2020 season. On Tuesday last, December 15, David Webster became the ninth Harps signing for next year, 2021. So is Ollie happy?
"They are going slowly is the best way to put it. You have to let things take their course. We could do with ramping it up and maybe trying to attract a few new players. We have got in Ryan Rainey, but we need a couple of others new, which will take its time as well.
"But look, we'll keep at it. If it takes up to the day that the league starts, that's what it takes," says Horgan.
When put to him that he was slightly ahead of last year, he said: "Fair enough, I didn't know that. Maybe that is a better view. It's time consuming," he said. "You have got to take that with the football part of it. It has always been that way."
Was he happy that he has got a lot of key players back, he quickly replied: "Yeah, but we need more. We need more of the key players and we need more to add to it, or else we'll be fighting at the bottom of the table again.
"And so be it, if that's what it is. We would be hopeful that we might be able to kick on and get up a rung or a notch, or whatever you call it. And please God we will. We need things to fall in place in the next couple of weeks."
The manager was full of praise for Sam Todd, who has gone to join UCD on a scholarship and he will be missed by Finn Harps. "Sam is a very bright kid. He's a brilliant kid, salt of the earth, an absolute gentleman of a young fella and a damn good footballer. He never caused me an ounce of bother in his three years and we wish him well," said Horgan.
In recent days, the signing of Ryan Rainey and David Webster has been a boost for Harps. And the manager said he was meeting players every day but there was nothing concrete in the immediate future.
There could have been a local rivalry to the 2021 season if Galway United had been promoted, but they just missed out in the play-offs.
Galway native Horgan, however, fully expects them to be promoted next year as they are going in the right direction.
"It is only a matter of time before they get back up," said Horgan.
Looking forward to the new season, Horgan says it will be great to hopefully get things back to normal.
"I think everybody is looking forward to the new year, for a load of reasons."
He is also looking forward to getting supporters back into Finn Park for the new season.
"I think that is key. Look, it was an advantage to us away from home, without doubt. We got a lot of points away from home, that normally you wouldn't, but at home, if we went 1-0 down, we found it very difficult to turn it around without the supporters.
"99 per cent of them are right behind you, through good and bad, and have been. Certainly the games in the summer when we fell behind in games, to Bohs and Shelbourne, we couldn't muster a fight; we couldn't generate a kick in us and a lot of that is down to the fact that the support was not there.
"It is not a nice place to come to for opposition teams when supporters are there. It is a much more quieter place without them," says Horgan.

Season
Overall, Horgan was happy with the season and he said that in the end he was hoping it had gone on longer, as they finished well.
"We started well and finished well. We struggled big time in the resumption. We had a scatter of games in a very short time, and we couldn't draw a breadth; we couldn't get a fight and a kick in us; no decisions went our way. And then it kicked in. I would have loved it to go on longer, whereas at the restart we couldn't wait for the end maybe.
"We need to start better if we have any chance of avoiding the relegation battle next year."
As regards panel numbers, Horgan has a target of 20-21 players.
"We basically need 20-21 players, with a 36-game league. That would include a couple of the U-19 players, who will come in with us.
"We are not half-way there yet and probably the more difficult work regarding the panel is to come."
Could there be a possibility of veteran Rafa Cretaro returning for another season at Finn Park? Horgan wouldn't rule anything out and it is obvious that the Harps boss has great time for the Tubbercurry man, saying he was a gem and is one of the best professionals he has ever dealt with.
So far Harps have the following signed on for 2021: Barry McNamee, Tony McNamee, Stephen Folan, Mark Timlin, Patrick McGarvey, Shane McEleney, Mark Anthony McGinley, David Webster, Ryan Rainey