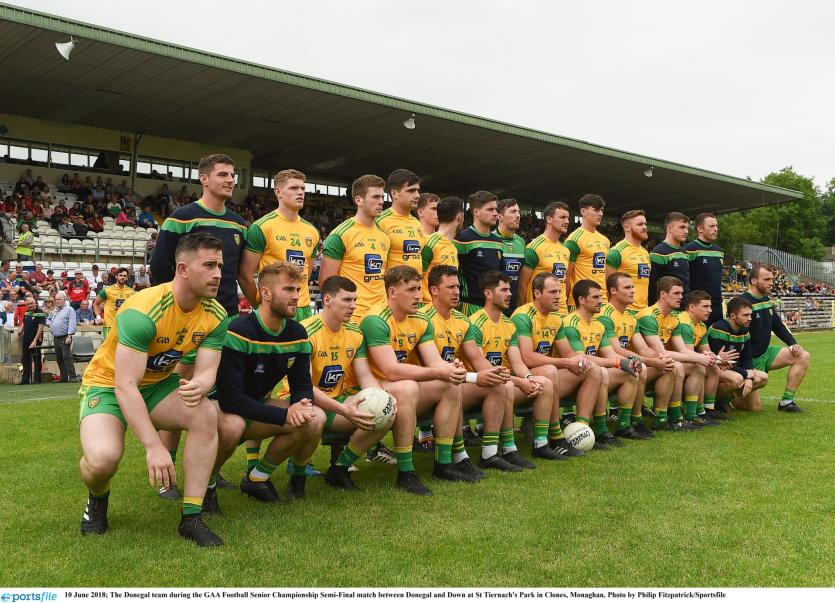 The Donegal team which last met Down in championship in 2018 Picture: Sportsfile

Donegal were handed an away championship draw against Down in the preliminary round when the draw for the Ulster championship was made on Tuesday night.
And manager, Declan Bonner, had his charges back on the training field on Monday night last as they prepare for a hectic few months.
The National League campaign begins on May 15 with an away game against Tyrone followed by a home tie with Monaghan and the third game away to Armagh on successive weekends.
A week later the league play-offs will take place with the top two in the Donegal group playing off against the top two in the southern group for the league honours, while the teams who finish third and fourth in the groups will be battling to avoid relegation.
Then it will be straight into the championship season with the opening games set for the lasat weekend of June and the Ulster final on the August Bank Holiday weekend.
But Donegal manager, Declan Bonner, is just happy to be back on the football field and looking forward to games, despite being handed a tough Ulster championship draw this week.
Bonner agreed that it will be much different this year with the championship and league games being played on a summer sod.
"We came back last year and the first game back against Tyrone in the National League. The championship was played on a very wet day in MacCumhaill Park. It was winter championship and it was new.
"The championship is going to be played (this year) around the same time that the championship was always played, but listen, it's going to be a very condensed period, so you're going right from your National League campaign straight into the championship.
"If you're picking up knocks and that there, it is going to be more difficult for lads to recover from that. The depth of the squad is going to be tested, but we are not just the only team, it will be the same for every other team.
"The squad is going to be very, very important as we hit the training ground this week. There are going to be niggles, players picking up knocks. That's part and parcel of it, but the strength and depth of the squad is there."
The manager is happy that the Donegal squad is strong and he is happy to have a number of players back after injury and army duty.
"Odhrán Mac Niallais is back with us and Odhrán McFadden Ferry will come back in next month. And then you look at guys that have been missing like Kieran Gillespie. We played that Ulster final (last year) with a lot of lads who had picked up niggles. But everyone is back training now and they key is to get all those lads back on the pitch and to remain on the pitch. That's a challenge in itself for the coaching staff and the medical staff and the strength and conditioning guys.
"It's going to be a challenging time because the games will come thick and fast and there is no right respite time between matches. But then it's nice to be talking about football, about the National League and the Ulster championship, and it's only around the corner now.
The Donegal squad remains much the same as last year but Bonner admitted that they are always willing to add players and he said that he would be working with the U-20 manager as well.
"At the minute we have the squad of 31/32 players and we will work with them. It all depends on players staying injury free," said Bonner, who added that even with the intensity of training players will pick up injuries.
"We have probably been unlucky with injuries over the last few years but then it is part and parcel of any sport. The strength and depth of the squad will be tested. But again it is a good place to be, to be back on the pitch, and I would say every manager in the country is saying the same."
The Donegal boss also pointed out that the Donegal Academy is now under the stewardship of Karl Lacey but in the short-term all that matters is the National League and championship which is only weeks away.
Bonner agreed that if Donegal are to progress in the championship they are likely to meet some of the teams they will face in the National League. "Listen, that is the difficulties within this season. But it is what it is. It hasn't been a normal 12 or 15 months that we have been living in, so it is great to be back. And it's great from a GAA perspective that people can watch games on TV for the time being. Hopefully, we will get back to somewhere near normal soon."
"We have a busy spell ahead of us," said Bonner, who said they would be based in Convoy for their training for the weeks ahead.

CHAMPIONSHIP TEST
Speaking to the Democrat on Tuesday, Bonner reiterated many times the great feeling it was to be back training and preparing for games.
Donegal have been drawn away to Down in the preliminary round of the Ulster championship and any path to another Ulster final will include games against Derry and Tyrone/Cavan.
But the Donegal manager was quick to point out that there are no easy games in Ulster.
"Ah listen, it's tough. But Ulster is Ulster and no matter what you get really, it's going to be tough. It's always difficult coming through the preliminary round, but the one thing is we're delighted to be back.
"The immediate focus for us is just getting ready for the National League campaign and that is a mini Ulster championship in itself. But naturally, the Ulster championship is the big one, and yeah, it's tough.
"It is always difficult going into Down and we have had a lot of battles there through the years. I suppose they are always formidable and with Paddy Tally, you could definitely see them making inroads last year.
"They were very, very unfortunate that day against Cavan in the semi-final. It looked as if they had won and won well but they allowed Cavan back into it.
"It's not going to be easy, and we have a lot of work to do between now and then. But listen, we're just delighted to be back playing again and we are really looking forward to it.
"It is really going to lift the spirits of a lot of people, that they can start now talking about football, about the league and the championship draw being made. All the doom and gloom of the last few months, hopefully that will lift it.
"It will be great to see, if it will be possible to see any spectators coming in before the end of the season. It would be brilliant to get some back in again," said Bonner, who said it would be something to look forward to.
"I suppose in the meantime, all the games will be televised anyway.
"It is a tough draw, but it is something that we are not going to complain about. We're glad that there's football going to be played and we we're looking forward to the challenge ahead.
26th meeting of Donegal and Down
When Donegal travel to Newry for their opening game in the Ulster championship it will be the 26th meeting between the sides and the first championship clash in Newry since 1971.
It will, however, be only the fifth meeting between the sides on Down soil. They have met twice in Newcastle and twice in Newry.
The last meeting in the opening round of the championship on Down soil was in 1986 in Newcastle, which ended in Down winning 2-8 to 1-10.
Prior to that you have to go back to 1971 - in Newry - when Down were victorious 3-14 to 3-6 (see Brian McEniff column).
Of the 25 meetings so far, Donegal have won 12, Down have won 11 with two games drawn (including the Ulster final of 1974).
More recently Donegal have been successful against the Mourne men in 2018 (semi-final) 2-22/1-12; 2013 (semi-final) 0-12/0-9; 2012 (final) 2-18/0-13.
The last Down win was in Ballybofey in 2010 in the opening round, the Mourne men winning 2-10/1-15 after extra-time.