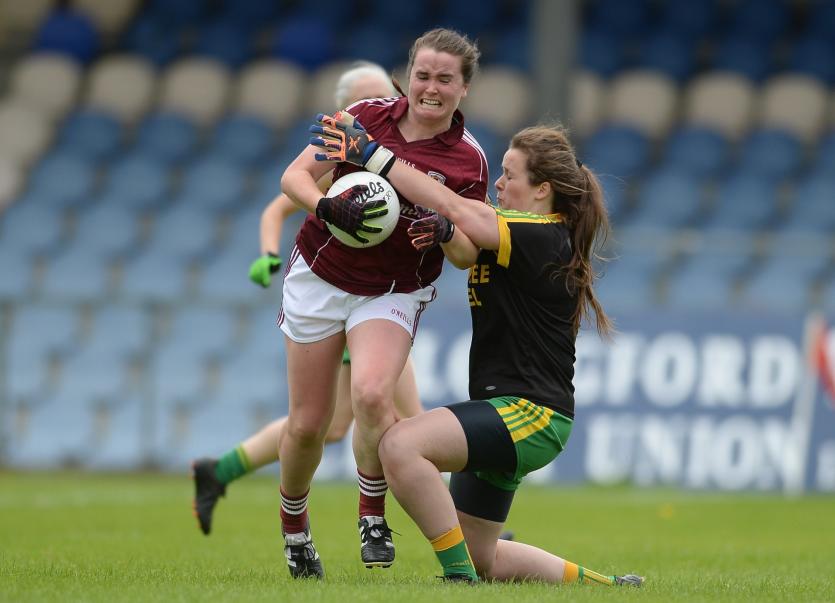 The Malin native is just 21, but seems wise beyond her years having made her senior debut at the tender age of 16 back in 2016.

With a place in the Division 1 semi-finals up for grabs, as well as the encounter being a dress rehearsal for the upcoming All-Ireland group stages, the stakes are high for Maxi Curran's players.

But experienced McColgan will doubtless cut a typically composed figure between the posts.
She said: "Every game comes with its pressures. As a squad you just have to prepare as best you can, and for me personally I try to keep a clean sheet.

"Galway are one of the top sides in the country, no doubt about it. All their forwards are very pacy and skilful and they have midfielders that can run for days.

"Andrea Trill got four of their goals against Westmeath, but they have good forwards also in Nicola Ward and Tracey Leonard, and I'm sure we can expect to see points coming from all over the pitch."

Donegal currently top the league table on six points, but if Mayo beat Westmeath as expected and Galway prevail on their home turf, it would be a three-way tie where points difference will determine who makes the semi-finals.

"Obviously we want to go down the road and win it," said McColgan. "You want to get as many matches as you can heading into the championship.

"It will be tough for sure. We haven't beaten Galway in three years, and we only drew with them in 2018, so they've definitely had one up on us this last while."

And, though the battle to top the group is an important one, astute McColgan says she expects both sides to keep a little in reserve ahead of July's crunch All-Ireland clash.

Donegal have been drawn in a group of three with Galway and Kerry, with the top two sides progressing to the quarter-final stages.

"The match will give both sides a chance to gauge where the other is at," she said, "but I would imagine a few cards will be held close."We're safe and that's the initial objective of the season taken care of."

But the ultimate objective, she admits, is what the Donegal camp refer to as the 'holy grail' - the All-Ireland title that has proved so elusive.
Since the inception of the competition in 1974, no Donegal side has reached an All-Ireland final. Despite consistent performances in both the league and Ulster championship over the last five years, they have been classic underachievers when it comes to the ultimate prize.

"That would be fair to say," she said. "We've done really well in the league and have won four of the last five Ulster titles, but then we just fall at that hurdle.
"But the belief that we can do it is there, 100 percent. There was a kick of the ball between ourselves and Dublin last year, and they went on to win it.

"The ladies championship is a whole lot tighter than the men's, and just that wee rub of the green could be the difference.
"As a team we are all striving towards the same goal, and that's to be in the Hogan Stand come September."