"These are the types of games we want to be playing" 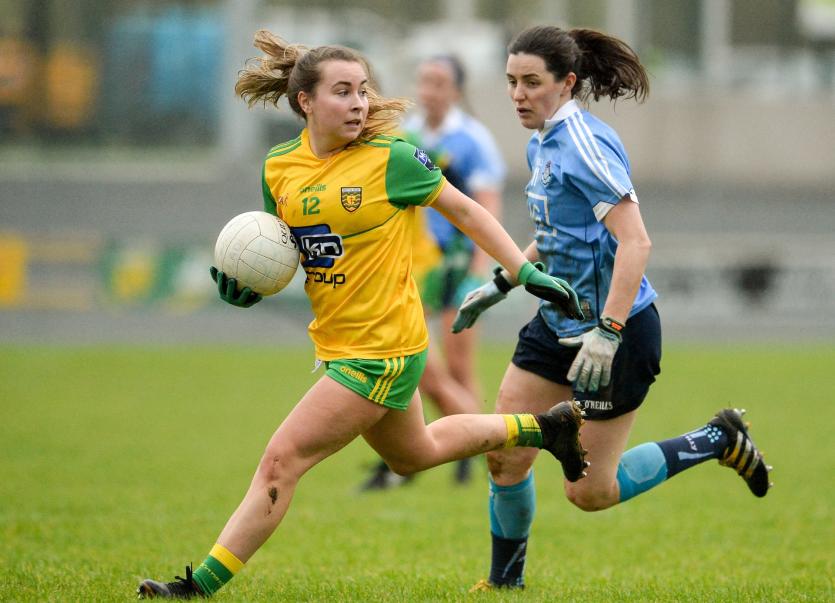 Blathnaid McLaughlin has been hugely effective in the Donegal Ladies half-forward line this season.

There's an air of confidence and belief sweeping through the Donegal Ladies squad that is stronger than ever before, says in-form player Blathnaid McLaughlin.

Though the Moville woman insists there's still a long way to go, she says the players are filled with determination following a string of eye-catching displays in the Lidl Ladies National League Division 1.

She told Donegal Live: "There's just a vibe in the squad this year that is completely different from any other.
“We are probably fitter than we've ever been, and the hard work we did individually through the winter is really paying off."

And hopes are now high that this stronger mentality could finally see them banish the All-Ireland disappointments of the last few years and stake their claim for football's 'holy grail'.

In the 47-year history of the ladies' All-Ireland Championship, Donegal have never lifted the trophy - or indeed reached the final.

"This year a big part of it is belief," said McLaughlin. In the last couple of years we've maybe had the 'shoulda, woulda, coulda' mentality, where we felt we didn't have the best of luck.

"And although we have definitely had some bad luck, at the end of the day we weren't able to close out big matches in the way that you should if you want to be considered one of the top teams in the country."

But something appears to have really clicked this season, and dominant performances against both Mayo and Galway mean they travel to face the mighty Cork in the league semi-final in Tuam this Saturday with absolutely no fear (Match live on TG4, throw-in 3pm).

McLaughlin, who played as a half-back last season, has been moved up to the half-forward line, and the tactical move has paid dividends, with the 24-year-old acting as a crucial link-up player in the middle of the pitch.

"I would still be doing a defender's role," she said, "but I'm also acting as a bridge between the defence and forwards.
"It's all about getting the ball up to them, and when you have forwards of that calibre up in front of you, you know they will do the rest."

Movingly, she was full of praise for big sister Niamh, whose example on the field of play, she says, has been an inspiration this season.

"Niamh has put in three brilliant performances in the last three games," she said. "I think it's actually the best football I've seen her play in a long time.
"And it's not even about the fact that she's captain this year; it's just the way she is. She just expects the best of herself, and I think to us playing alongside her, that really pulls us up and makes us believe that's the level we should all be at.

"She is just great at taking control of a game and leading everyone."

And McLaughlin says the squad are keen to test themselves now against the cream of the crop, with the upcoming league semi-final against Cork sure to give an indication of whether Donegal's serious All-Ireland aspirations are justified.

She said: "You know what you are going to get when you play Cork. They are a big, sharp physical team and it will be a battle.
"But we are really looking forward to it, and why would you not? If you really believe you are one of the top teams in the country, then these are the types of games that you really want to be playing.

"I said to Niamh last Sunday before the Galway game, 'I've a good feeling about today', and that just seems to be the mood in the squad this year.
"We're more relaxed, and we know the work we've been doing is paying off. So we will look forward to Cork and really go for it, as we have been from the start."