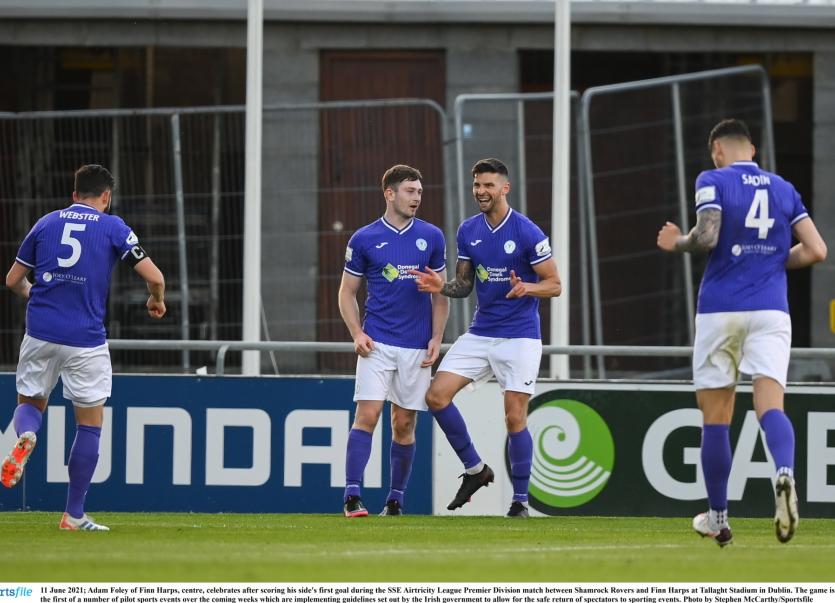 Home fans returned to Tallaght this evening but they were silenced as Adam Foley gained a more than useful point for Finn Harps against SSE Airtricity League Premier Division champions Shamrock Rovers.

The game is one of the first of a number of pilot sports events over the coming weeks which are implementing guidelines set out by the Irish government to allow for the safe return of spectators to sporting events, with 1,000 Rovers supporters and none from Harps enjoying the sunshine.

Aaron Greene stroked the hosts into an early lead as they dominated possession before the break. However, Harps steadied themselves in the second half and will be content with how it panned out with Foley again finding the net against a team they've not beaten since 2008.

It was nervy stuff, with Mark Anthony McGinley again impressing between the posts for the Ballybofey club as The Dublin 24 outfit piled forward in search of a late winner. Lee Grace saw Karl O'Sullivan clear off the line in stoppage time.

A mistake by Kosovar Sadiki, who dealt things too long, enabled Rory Gaffney to nip possession in a dangerous area in the ninth minute and with the Harps backline exposed, the ball was squared for Greene to slot into the empty net for the opening goal. It was a sluggish opening for Harps and they were rightly punished.

Greene almost got in for a second only for Dave Webster to make a last-gasp challenge and then, at the other end, Will Seymore drew a decent stop from Alan Mannus from a long-range strike.

Harps, who went 3-5-2 at the break to match Rovers, started the second half well and got back on level terms when Foley squeezed past Alan Mannus from an acute angle on 56 minutes for his seventh goal of the season.

Graham Burke hit a fine free-kick on 64 minutes, drilling towards the near post with everyone in the penalty area, with Mark Anthony McGinley in the Harps goal getting down well to save at the near post.

Tunde Owolabi, so impressive against Sligo Rovers two weeks ago, made a decent run on 69 minutes, holding off Liam Scales but dragging his shot from a tough angle across the face of Mannus's goal.

With Stephen Bradley's side starting to turn the screw, Gary O’Neill saw a shot deflected wide and Harps drew a bit of ire from the home crowd for slowing things down. They also screamed for a penalty when Gaffney went down under a challenge from Webster, with referee Ben Connolly awarding a corner kick.

Sean Gannon was booked for simulation in the 85th minute with Sadiki the one who was drawn in in the Harps penalty area. Rovers, who have proved a team to never lie down with their abilities to claim late points were knocking again. McGinley got down to save excellently from O'Neill with three minutes to play.

Burke then fizzed a shot just wide with Harps camped in, before O'Sullivan cleared two minutes into six of injury time before making a lung-bursting break to the corner flag to lift the pressure and Sean Boyd, against his former club, almost headed a 95th minute winner from a cross by Webster, only to see his effort go off target.