Another big game in Ballybofey on Friday night 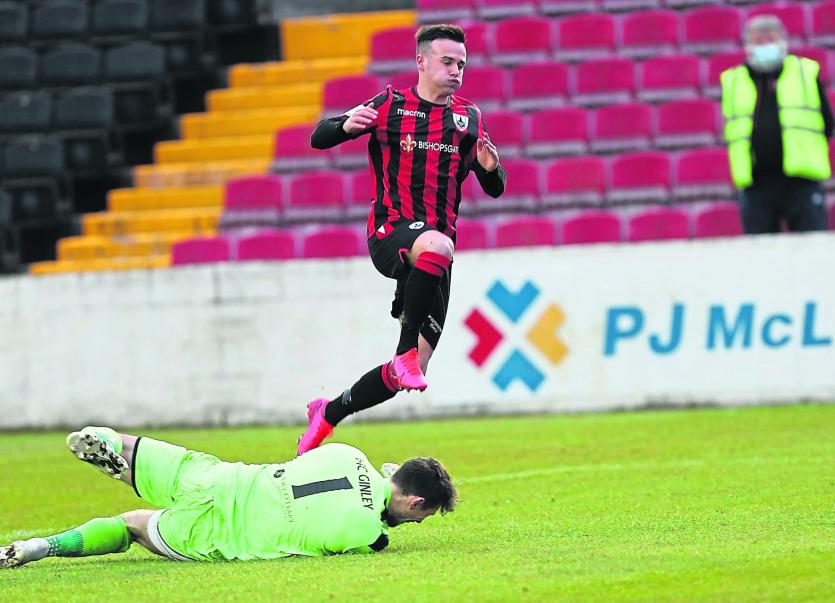 Bottom-of-the-table Longford Town are the visitors to Finn Park on Friday night as the SSE Airtricity Premier Division campaign reaches the half-way point.
For Harps, it’s another crucial game. The Ballybofey side have slipped into the bottom three in the Premier Division following last Friday night’s loss to Derry City and Monday night’s heavy defeat to St. Patrick’s Athletic.
And while Ollie Horgan’s side remain well clear of the bottom two, the gap to Waterford and Longford Town below them is narrowing by the week.
Which makes this Friday night’s match in Ballybofey all the more important.
Harps haven’t won at home since back on April 10, but if they could pick up the three points this weekend, they would move 14 points ahead of Longford and the automatic relegation spot.
At the half-way stage of the season, that would be a very welcome position to be in.
However, Longford have already shown this season that they are more than capable of making life difficult for the best clubs in this division. They frustrated Harps by holding them to a 0-0 draw when the sides met in Bishopsgate back in April and Harps assistant boss, Paul Hegarty has warned that his side will face another difficult test on Friday night.
“To be fair, that night, we had enough good chances to win,” he said. 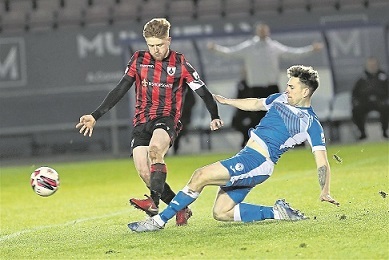 Aodh Dervin pictured in action for Longford Town against Mark Russell of Finn Harps  at Bishopsgate in April. Russell this week signed for Greenock Morton following his return to Scotland PICTURE:Syl Healy

“It was probably another disappointing night for us. We had the chances to win the game and we didn’t take them. That’s been a problem. We have been creating chances this year and we haven’t been taking them. It’s cost us big time.
“But Longford have been very good this season. They went to Oriel Park (last Friday) and got a good point against Dundalk and fully deserved it.
“By all accounts, they were very good against Waterford on Monday night too but came away with nothing.”
Harps will welcome Karl O’Sullivan back from suspension after he was banned for Monday night’s match in Inchicore. 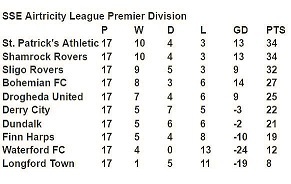 Injuries to Johnny Dunleavy and Dave Webster saw Ryan Rainey come in for his first start while Conor Barry started for the first time since the opening match of the season.
“The boys that came in did really well,” Hegarty said.
“Ryan Rainey made his first start and did really well. Conor Barry made his first start since the first match of the season. It’s a big ask for players who haven’t played much to go to Inchicore but to be fair, they did quite well in the game.”
There were debuts too for Nathan Logue, Luke Rodden and Joel Bradley Walsh, all of whom came off the bench in the second half at Richmond Park.
“They have been in training with us and have done quite well,” Hegarty said.
“They saw against St Pat’s the tempo that the game is played at, at that level. It might be a bit much for them as yet but at least they know now what’s in front of them.”
Friday night’s game offers Harps a chance to get some points on the board after a disappointing run of results.
Hegarty though insists the team has been playing well.
“To be honest, things haven't fallen for us,” he said.
“We haven’t been bad in games.
“If you look at the games at home against Sligo and Derry, with a bit of luck we could have won both matches. I think we were the better side in both games.
“I’m not saying we were the best side against St Pat’s by any means. We went after the game in the second half, we went 4-4-2 and probably left ourselves a bit open. We got a goal back but we gave away poor goals to be honest.
“We were pushing on and they were always going to get chances.”
Friday night’s game kicks off at 8pm and once again, up to 100 Finn Harps supporters will be allowed into Finn Park under the easing of Covid-19 restrictions.