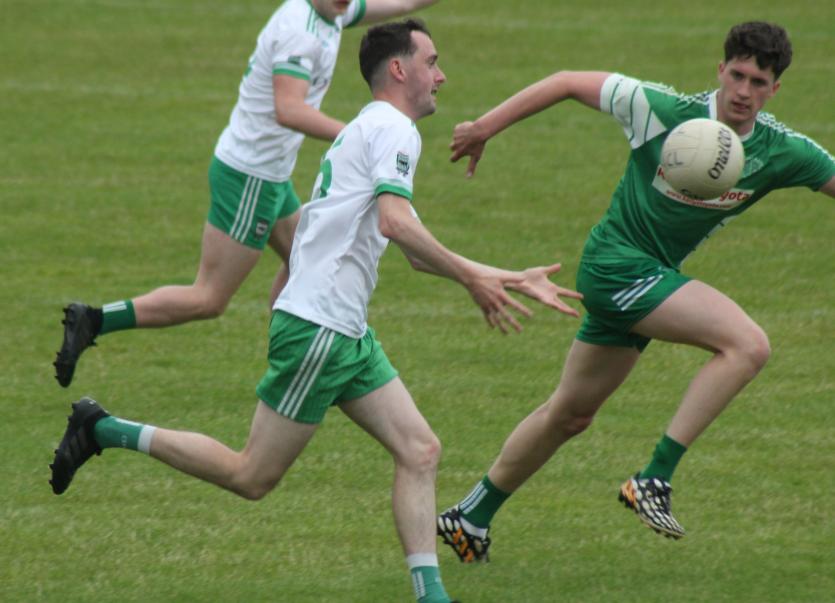 Action from the meeting of St Naul's and MacCumhaill's this evening in Mountcharles. Photo by Chris Doherty

A sublime goal from Naul’s greatest Gaelic gladiator Stephen Griffin was the real difference between the sides in an entertaining affair in the Gerard Gallagher Memorial Park.

Griffin (1-9, 7f) showed great vision by flicking the ball overheard into the path of the flying Cathal Lowther-a magical one two before he slid the ball low to the MacCumhaill’s net in the 18th minute.

That superb strike put the home side into a 1-4 to 0-3 lead and they led by 1-5 to 0-5 at the break as Jamie Keegan and Darren O’Leary were on target for a wasteful Twin Towns side who hit eight wides.

MacCumhaill’s launched a spirited comeback in the second half mainly through the accuracy of  O’Leary who is Jimmy Keaveney-esque and there was only a point between the sides as Naul’s led by 1-9 to 0-11 nine minutes from time.

But a few errors by the visitors were punished by the clinical Griffin who had strong support from midfield partner Stuart Johnston, as the home side held out for a valuable victory.