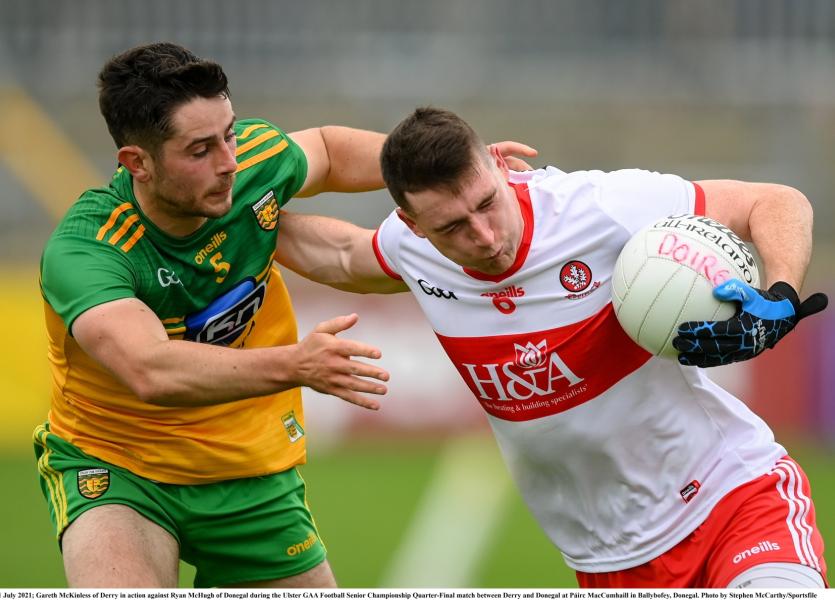 Patrick McBrearty kicked the winner with 20 seconds of injury time left as Donegal dramatically squeezed past Derry and onto an Ulster SFC semi-final with Tyrone next Sunday.

McBrearty was very well-handled by Chrissy McKaigue and managed just one early free but when Donegal were staring down the barrel at 0-14 to 0-14, kicked a free to get them in front for the first time on 70 minutes before the late winner.

By then the clock had already turned from black to red, after Shane McGuigan had scored with what looked like a score to send it to extra-time.

It was unfortunate on Derry, who were there or thereabouts and Rory Gallagher’s team came within a goal that would’ve put them four points up early in the second half. Benny Heron’s effort cannoned down and only stayed out by inches, with the ball coming back off the line with chalk on it.

Donegal manager Declan Bonner made the decision not to start Michael Murphy, who had to be content with a seat on the bench. It was the first time he didn’t start a championship match since the opening round win over Cavan in 2012 - a run of 51 successive outings. Without their talisman Donegal looked ill at ease with Derry dictating the pace of the game.

His side were disciplined and deliberate, wary not to get into a shoot-out against a Donegal aisde who racked up their record championship score in 2-25 in their preliminary round in Newry. Defend in numbers they did, but when the chance arose, they worked in their more than capable forward line which was spearheaded by McGuigan.

The Slaughtneil forward’s second minute free came down from an upright and in the scramble that followed, Heron smashed a ball at goal only to see it blocked by Hugh McFadden.

By the first water-break, Derry were 0-4 to 0-2 in front with Padraig Cassidy supporting on the shoulder from deep before scoring a fisted point, a typical example of how they could spring. Murphy was already lightly warming up.

In quarter two, Derry pushed their lead out to four, 0-7 to 0-3, with Conor Glass curling over a lovely score and McGuigan pointing for the third time in the half on 24. Donegal were looking a little cruxed, although did manage to get some sort of a gallop, with Michael Langan in particular with two points, cutting their deficit down to one at half-time, 0-7 to 0-6.

Three minutes into the second half came the one most likely to be discussed into the evening, as Cassidy got in at the end line and centred for Heron, whose punch beat Shaun Patton and crashed off the underside of the crossbar but not wholly over the line. Inches.

The contest was opening up and Derry were comfortable with that. When Ciaran McFaul put them 0-11 to 0-8 in front on 54 minutes, Murphy was readied and on, only a prelude to a point from Emmet Bradley that he might’ve taken on for goal.

Murphy immediately pointed from a free and another substitute, Paul Brennan, scored to lift the atmosphere among the 500 attendees and take Donegal back to 0-12 to 0-10 down when the water bottles were thrown out.

Langan, on the resumption, made it a one-point game, only for Gareth McKinless to stretch it out to two almost immediately, before Niall O’Donnell slimmed it down again. Derry, with 10 to play, were 0-13 to 0-12 in front.

O’Donnell was finding his groove, leveling it moments late, with eight to play. Derry wouldn’t lie down, with the influential McFaul scoring a point when they needed it most but again, Murphy was on hand to slot over and it was all square again.

Over the course of the actual 70 minutes, Donegal never led once. McBrearty’s two points in injury time meant they still won the race. Tyrone await in Enniskillen this day week.