Donegal and Tyrone - the latest chapter in the never-ending story 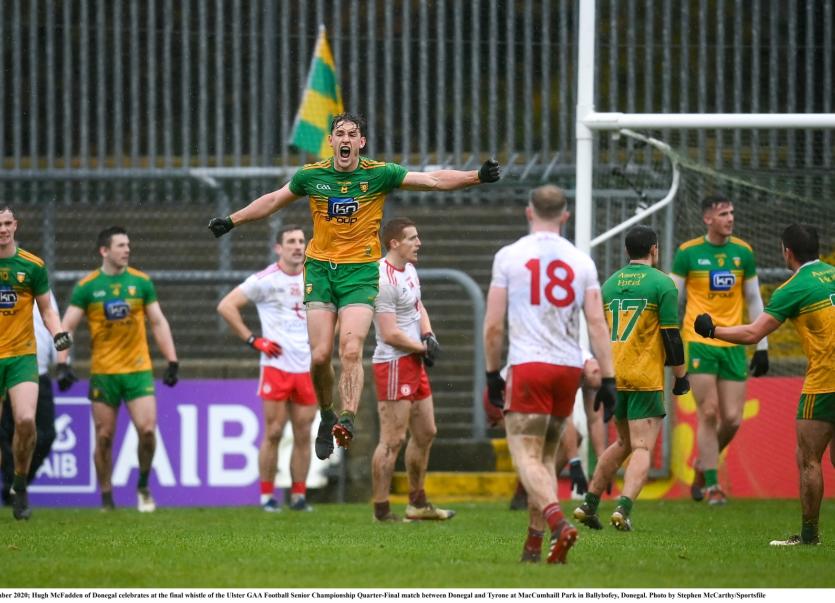 Well, he did say it. In the lead-up to Donegal’s Ulster SFC preliminary round fixture against Down, Declan Bonner stressed that he would be more than content to get out of Newry with a one-point win.

As it turned out, his team had 16 to spare and yet he ended up fielding questions as to why he played Michael Murphy and was it a concern that Shaun Patton was a little bit busier than he might’ve wanted to be.

Last week, before the quarter-final against Derry in Ballybofey, Bonner trotted out the line again and although it might’ve been lost on some, when David Coldrick, the match referee, tooted for time on Sunday the relief on the face of the Donegal manager was there to see.

Bonner clenched his fists for the photographers not long after the Donegal bench had exploded when Patrick McBrearty kicked an epic winning point, with the ball leaving that trusted left boot about a second before the clock hit 74 minutes, with four minutes having been signalled.

To their left, Rory Gallagher’s facial expression was the exact opposite, with the former Donegal manager cursing his side’s fortune after a disciplined and daring display had fallen inches short. Final score: Donegal 0-16 to Derry’s 0-15. A one-point victory.

“We had spoken about it going down to the wire to be honest,” Bonner said afterwards, adrenaline still pumping. “It was a real Ulster Championship match. As I said earlier on, if we come out of this with a one-point win we would be delighted with it.”

There was no press briefing this week, although if there was it’s fair to assume Bonner would take another one-point win and gladly run back to the hills on Sunday against Tyrone.

On Saturday evening, Tyrone, although matched for spells in the first half, had eased their way into the semi-final, ousting reigning champions Cavan.

The winning scoreline was 1-18 to 0-13 with Darren McCurry running amok scoring 10 points and getting to present himself with man of the match in these Covid times, Brian Kennedy scoring the only goal and Cathal McShane back in the thick of it with three points from the bench. Conor McKenna and Darragh Canavan — who sustained an ankle injury in the heavy league defeat to Kerry — were notable absentees.

“Tyrone will be favourites,” Bonner said moments after his team’s win over Derry on Sunday. “Donegal and Tyrone have had huge battles down through the years and it’s going to be no different next Sunday in Enniskillen.

“Sunday will be different again, and in fairness Tyrone were impressive in the way they dismantled Cavan and the way they went about their job in a really good manner.”

Needlessly, Ronan McNamee, Tyrone’s full-back, was sent off for shoving Conor Brady in the face in the vicinity of match referee David Gough. Tyrone joint-manager Feargal Logan, a solicitor by trade, has dealt with these types of disciplinary issues with the Central Hearings Committee, Central Appeals Committee, and the Disputes Resolution Authority before and along with his co-pilot Brian Dooher, will throw the dice of appeal.

“Well if we can find some man who knows anything about the GAA rulebook we might have a look at it!,” he said on Saturday. “Seriously, I haven’t seen it yet really so I need to look at it. It needs to be judged on its own merits. We will see how this week goes, there are channels within the Association to deal with this quickly and expeditiously.”

The result of McNamee’s appeal will play a significant part in Tyrone's planning. McBrearty, prior to kicking the winning point on Sunday, was very ably shackled by Chrissy McKeague and although Michael Murphy’s introduction was a massive factor in Donegal coming from four down to win, his and Odhran MacNiallais’s presence was understandably, over-compensated for by Derry, and the likes of Niall O’Donnell grew significantly into the game as a result.

Murphy has played 29 minutes in Newry and was introduced on 46 minutes on Sunday, meaning the glass half-empty folks will perhaps be right in assuming he won’t play the entirety of the Sunday’s semi-final. Donegal might put a safety blanket alongside the cotton wool, while Peadar Mogan was also out last week having picked up a knock at training three nights’ beforehand.

“He was passed fit for the Down game and he came out after 30 minutes, so we got another 30 minutes into him and that was important for us to be quite honest,” Bonner said of Murphy. “It’s one thing saying it, he’s got to get football, he’s got to get back in and so we’re delighted that he got through that game.”

Last year, Donegal concluded Tyrone’s shortest championship season in 20 years when they battled through the MacCumhaill Park sludge to win 1-13 to 1-11 in front of an echoey stand as Mickey Harte took control for the last time.

Times are changing in Tyrone in many ways, but not so much in regards to their rivalry with Donegal. It’s the latest chapter of the never-ending story, although on Sunday the 2021 championship will end for one of the great rivals.