Niamh McLaughlin: 'There's a great feeling within this Donegal team' 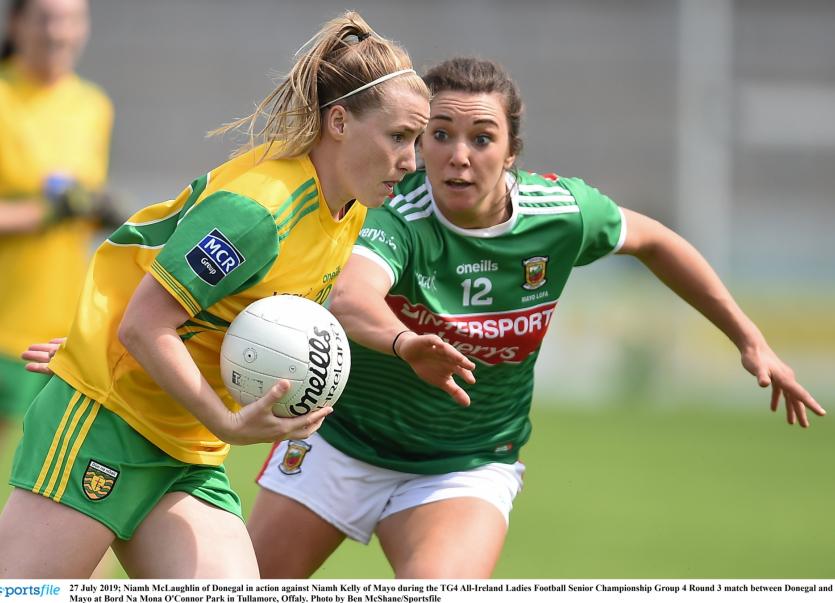 Donegal will begin their bid for All-Ireland glory in the TG4 All-Ireland Senior Championship this weekend when they take on 2019 beaten finalists Galway in their first group match (Markievicz Park, Sligo, Saturday 4pm).

Maxi Curran's squad inflicted a comprehensive 4-21 to 2-11 league division one defeat on Galway in Tuam earlier last month, but the Tribeswomen beat Kerry 2-11 to 2-10 at the weekend to signal their intentions of being one of the two sides that advance out of the three-team group and into the quarters.

And despite that resounding victory back in June over their upcoming opponents, Donegal captain Niamh McLaughlin expects this encounter to be anything but one-sided.

The Moville woman said: "I wasn't surprised to see Galway win that match. Kerry maybe let it go by them a little bit, but Galway are one of the top sides in the country.

"They have made about four or five changes to the side that lost to us in the league. We would be expecting that, and we know that nothing that happens now would be too surprising - this is championship."

It's make or break time now for Donegal. Despite having performed strongly in the league and provincial championship over the last few years, they have inexplicably fallen short at the All-Ireland stages.

But there is an added strength - in both the physical and mental sense - within the squad that is perhaps more prevalent than ever before, McLaughlin believes.

"We are beating top teams with more consistency than before," she said, "and I think we have reached a place now where no team is going to take Donegal for granted.

"Joe Gallanagh has come in as strength and conditioning coach and he has made a big difference.

"The ladies game has gone from strength to strength in the last few years. Strength and fitness is so important and all teams are trying to be the best, so of course you're going to grab low-hanging fruits like that when it can make such a difference."

And strength in depth, says McLaughlin, could prove another vital factor as they begin their quest to become the first ever Donegal Ladies side to reach the final of the All-Ireland senior competition since the inception of the competition in 1974.

"There's a great feeling within the team this season," she said. "The younger girls - we call them the younger girls, but they're all 21,22 - they are pushing the more established players on. There is genuine competition for places, and the bench is just as strong as the starting 15. Any one of those players could come on and make an impact. We've had a good month to prepare and we're in good shape."