Donegal Under-16s turn on the style to win in Derry 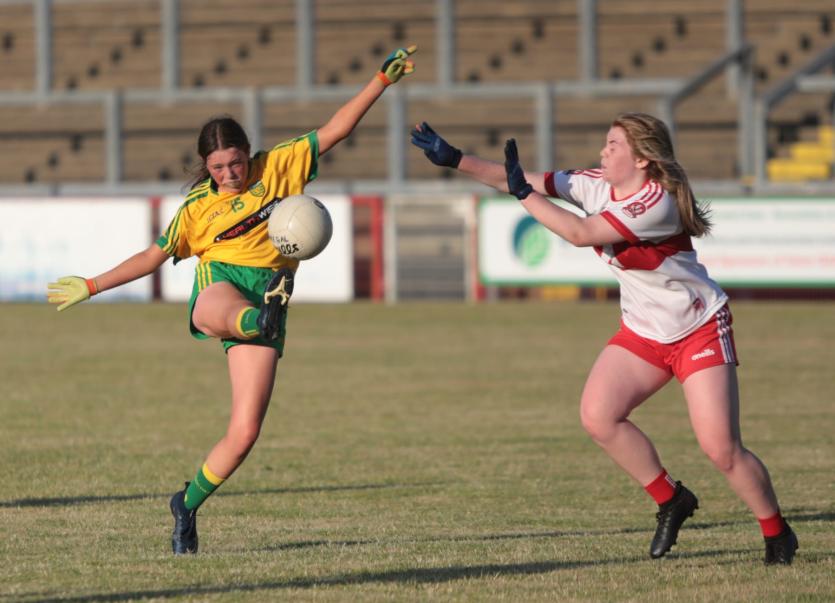 Mary-Anne Ward of Donegal takes a shot at goal at Celtic Park.

Dungloe's Tara Geoghegan netted four in the one-sided affair that saw Donegal, narrowly beaten by Tyrone in their opening match last week, in the driving seat throughout to claim a well-deserved win.

First-half goals from Abbie McGranaghan (Robert Emmett's), Katie Dowds (MacCumhaill's) and Geoghegan gave Donegal a commanding 3-4 to 0-4 lead at half-time, and they turned the screw further in the second half as the Derry backs struggled to cope with the visitors' confidence, pace and fluidity.

Rampant Geoghegan scored a further three goals in the second half, with Buncrana's Nicole McDaid and Holly Roarty of Four Masters also finding the back of the net, Manager Liam Skelly gave the bulk of his subs a run out, and they proved every bit as effective as the starting 15, with Muff's Rhiana McColgan and Buncrana pair Tara Rose Mahon and Nicole McDaid all making impactful displays from off the bench.

Donegal forward Mary Anne Ward (Gaoth Dobhair) may not have featured among the goals but made a fantastic contribution up front, while Aodh Ruadh's Cara O'Loughlin gave an impressive fielding performance in the middle of the pitch,

Derry's Aine McAllister grabbed a late consolation goal but the Oak Leafters just couldn't match Donegal's firepower, though they battled resolutely throughout and will also take plenty of positives away from this match.

Next up for Donegal is an away clash with Antrim, with the result determining which tier of final they will play in.