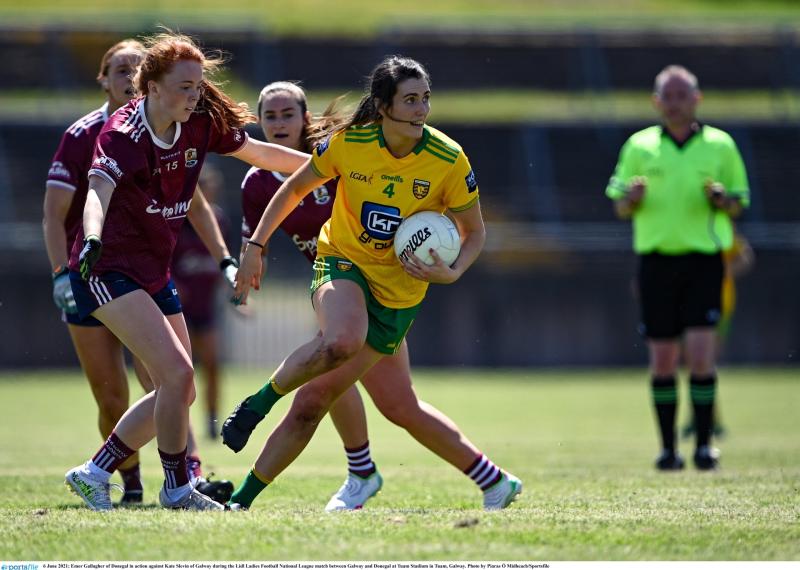 Donegal are going to have slay five in a row chasing All-Ireland champions Dublin on Bank Holiday Monday if they remain in the TG4 All-Ireland Ladies Senior Championship race.

And victory is a pretty tall order for Maxi Curran and the Donegal Ladies.  The Dubs who are unbeaten so far in 2021 have already captured silverware with last month’s Division One league final win over Cork.

“It is a daunting challenge. They are going for five championships in a row and they do seem to be getting stronger,” said Donegal manager Curran.

“Hannah Tyrell has returned from playing rugby. She is an Irish international number ten and is a huge addition for Dublin. It is as tough a draw as we could get and it is a daunting challenge but one the girls are looking forward to the challenge.

“They are hot favourites. But we have given them as much bother as any other team in the last few years and they will see us as a tough draw too.”

Monday’s showdown will be a third championship meeting between Donegal and Dublin.

And Donegal will draw encouragement from the two previous meetings; the 2016 All-Ireland last eight tie and last season's third round group game.

Just three points separated the sides at the end of those meetings with a fluke second half Dublin goal that almost defied gravity was  the difference at the end of last season’s clash.

Denise Aherne curled a right-footed strike towards the posts but the ball struck the upright and somehow dropped into the goal past Denise McElhinney in the Donegal goal.

“It was an unbelievable goal and it was the difference at the final whistle but it was not the reason we lost the game,” Curran added.

Donegal were undefeated in the group stages of the league but found Cork too hard a nut to crack in the league semi-final.

And they followed that win up with a runaway 6-12 to 1-10 win over Waterford.

Donegal began the championship season with a comfortable win over Cavan, 6-16 to 2017, in the Ulster semi-final.

And after a bizarre defeat to Galway, 3-10 to 1-11 where Galway secord three goals in less than two minutes of the start of the second half, in the first of the group games in the All-Ireland series, Donegal bounced back last weekend with a hard fought win over Kerry.

Ace forward Geraldine McLaughlin was in devastating form and kicked 1-9 of the Donegal total against the Munster women.  Katy Herron chipped in with 1-1.

Interestingly, the champions who are a very potent force had 11 different scorers over the two games. This compares with Donegal’s five.

Donegal have been dealt a blow this week with the loss of top defender Emer Gallagher to injury. The Termon woman picked up a knee injury last weekend against Kerry and has been sidelined with the injury for this week’s clash.

“Emer is a massive loss,” Curran said. “She is a big player for us and a top class defender and is the type of player you need against a physician side like Dublin.”

Roisin Rogers from Naomh Muire replaced Gallagher, when she was forced out of last Saturday’s game.

“Yeah Roisin is in the frame to replace Emer, but there are a couple of others in contention too,” added Curran. “But it is also a case of picking horses for courses to suit the opposition you are playing.”