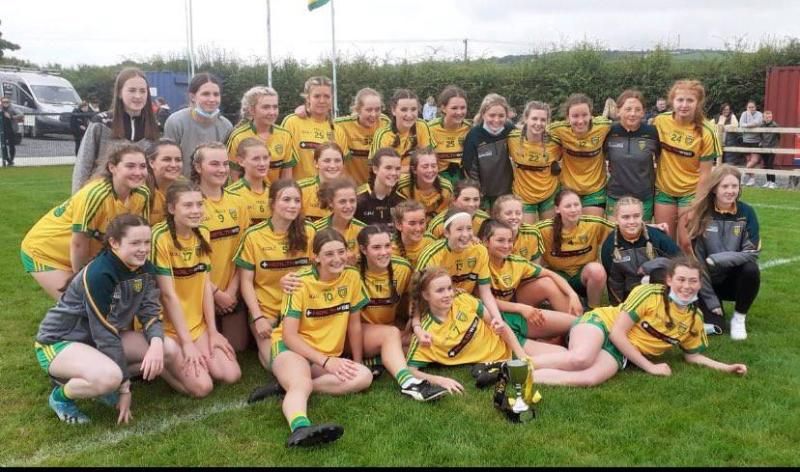 Donegal U-16 girls rounded off their season with silverware following this afternoon’s Ulster Ladies Gaelic U16s Silver Final win over Armagh in Lifford.

Donegal beat Derry and lost to Tyrone and Antrim in the group stages of the championship. But they made no mistake when the chance at silverware came about and they were deserving winners of this afternoon’s clash.

McColgan and O’Neill netted the goals either side of Eva Cassidy’s strike for the Orchard Co girls who beat Cavan and Fermanagh and lost to Monaghan, in the earlier rounds.

This was a polished performance with Donegal laying the foundation for the victory playing into a stiff breeze in the first half.

And then they came out in the second period and finished the job off  and had the result in the bag long before the final whistle.

This was down in no small way down to the power and pace of the central attackers McColgan and Geoghegan and the work rate of Eva Gallgher in the middle of the field.

A well-marshalled defence in which Leah Cunningham and Ulitah Boyle turned in solid performances also contributed to the seven points win. The real star of the show Emma Neeson,at left corner back.

The Red Hugh's player was simply outstanding throughout and especially in the first half when with the breeze in their backs Armagh threatened.  Her anticipation and ability to sense danger was good as ever witnessed by the reporter at any level.

She was like a magnet. The ball simply struck to her. It was a truly outstanding performance and she was my player of the match.

Donegal took complete control in the third quarter and outscored Armagh, 1-3 to 0-2 to lead 3-5 to 2-4 at the water break. And they were out of sight when they led by double scores, 4-8 to 2-4, going down the home straight and before Cassidy struck late for Armagh’s third goal. Others to shine bright for Donegal were  Leah Cunningham, Aisling O’Neill, Katie Dowds, Niamh Harkin and Iseult Ní Mhathúna.