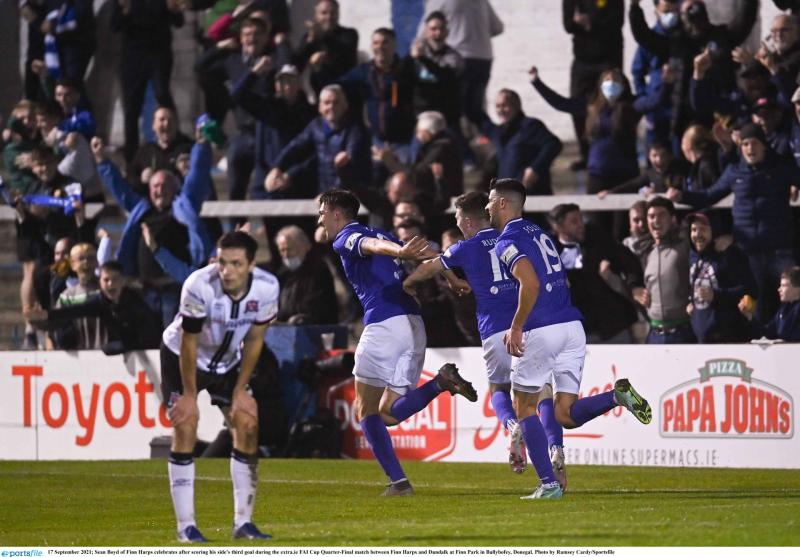 In one of the most dramatic finales witnessed at the rustic old Finn Park in many a year, Sean Boyd came off the bench to secure a draw and set up a replay against Dundalk with a late double - the second of which came in the 95th minute.

It looked as though Dundalk had come from behind to oust 10-man Harps at the quarter-final stage, although many in attendance might feel things swung in their favour following a debatable first half red card.

After Tunde Owolabi’s opener, Jordan Mustoe was sent off in an incident that led by Pat Hobin levelling from the penalty spot before Sean Murray put Dundalk in front at the break. Murray’s inviting cross to Tobin looked to have sealed the win in the second half with Harps jading.

However, the 10 men were brave and got their rewards for never throwing in the towel with Boyd’s late brace sending the old ground into pandemonium. 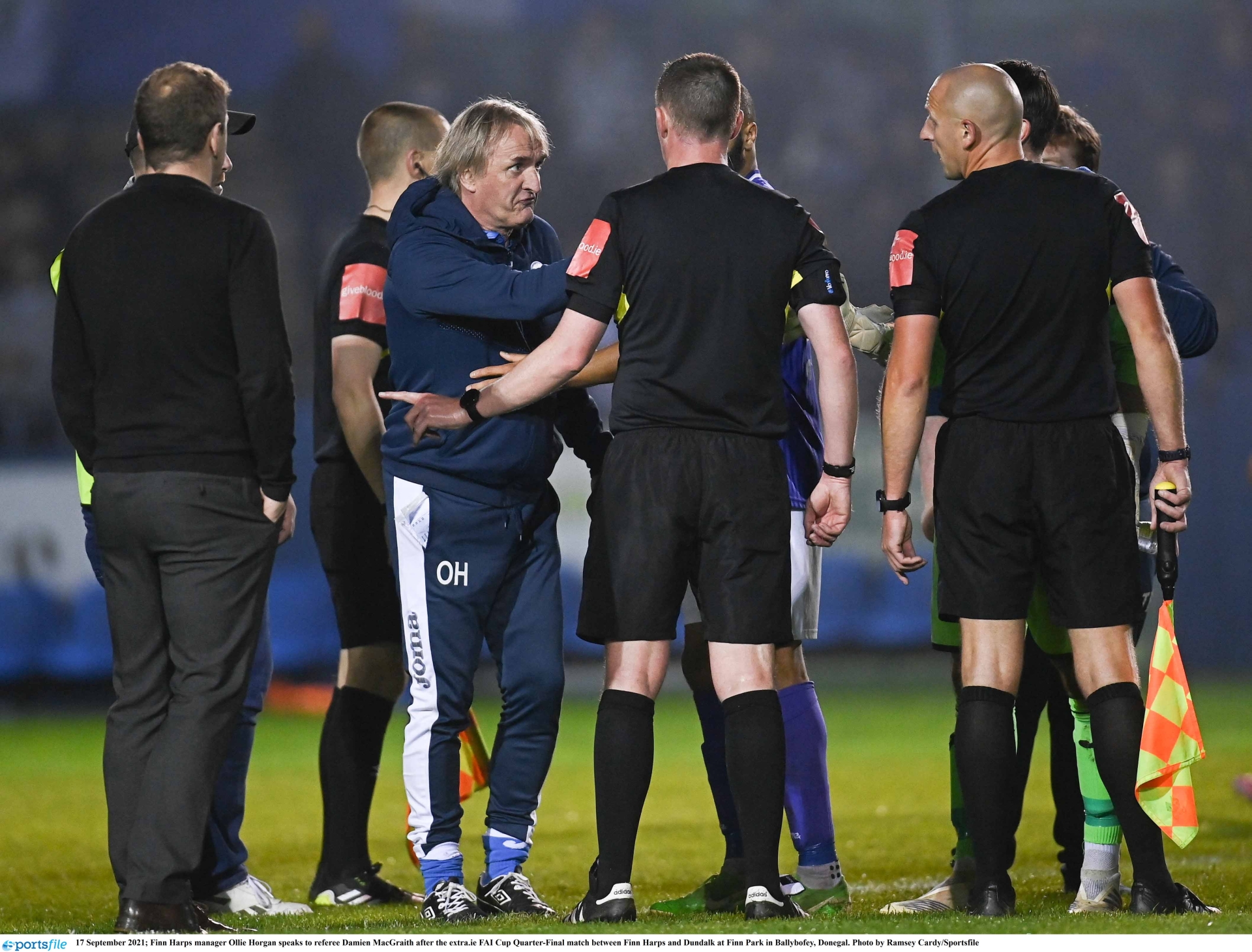 After a tepid opening quarter, the contest burst into life with a bang. Harps went ahead on 25 minutes when Barry McNamee took advantage of Dundalk indecision in the left-back berth to play in Owolabi, who was still at the narrowest of angles only to pierce the opening goal low across the brows of Peter Cherrie.

Then things turned on their head within four minutes, with an incident that caused considerable controversy. Mustoe slid to block a shot from Murray after Mark Anthony McGinley in the Harps goal had saved an initial fizzler from Hoban. Referee McGraith instantly flashed the red card to the Harps left-back and Hoban scored the resultant penalty.

Harps manager Horgan and his assistant Paul Hegarty were irate with the decision, claiming Murray’s drive had hit Mustoe’s shoulder. Their feeling of injustice was further ignited just moments later when Ethan Boyle was upended in the Dundalk penalty area by Cameron Dummigan and McGraith waved play on.

With Harps sitting in and Owolabi looking evermore isolated up top, Dundalk went in front on 39 minutes through a Murray shot from long range that didn’t move like a steam train before nestling in the bottom corner having taken a nick off Johnny Dunleavy. With Harps living on the edge, Mark Coyle, on the stroke of half-time, somehow steered a Sam Stanton close ranger over the crossbar.

Dundalk, have appeared in all six of the last FAI cup finals, winning three and losing three, with the most recent of those the 4-2 extra-time success over Shamrock Rovers last season.

League form though, has been more a catastrophe than a concern for Vinny Perth’s side who currently sit second from bottom in the relegation play-off spot. 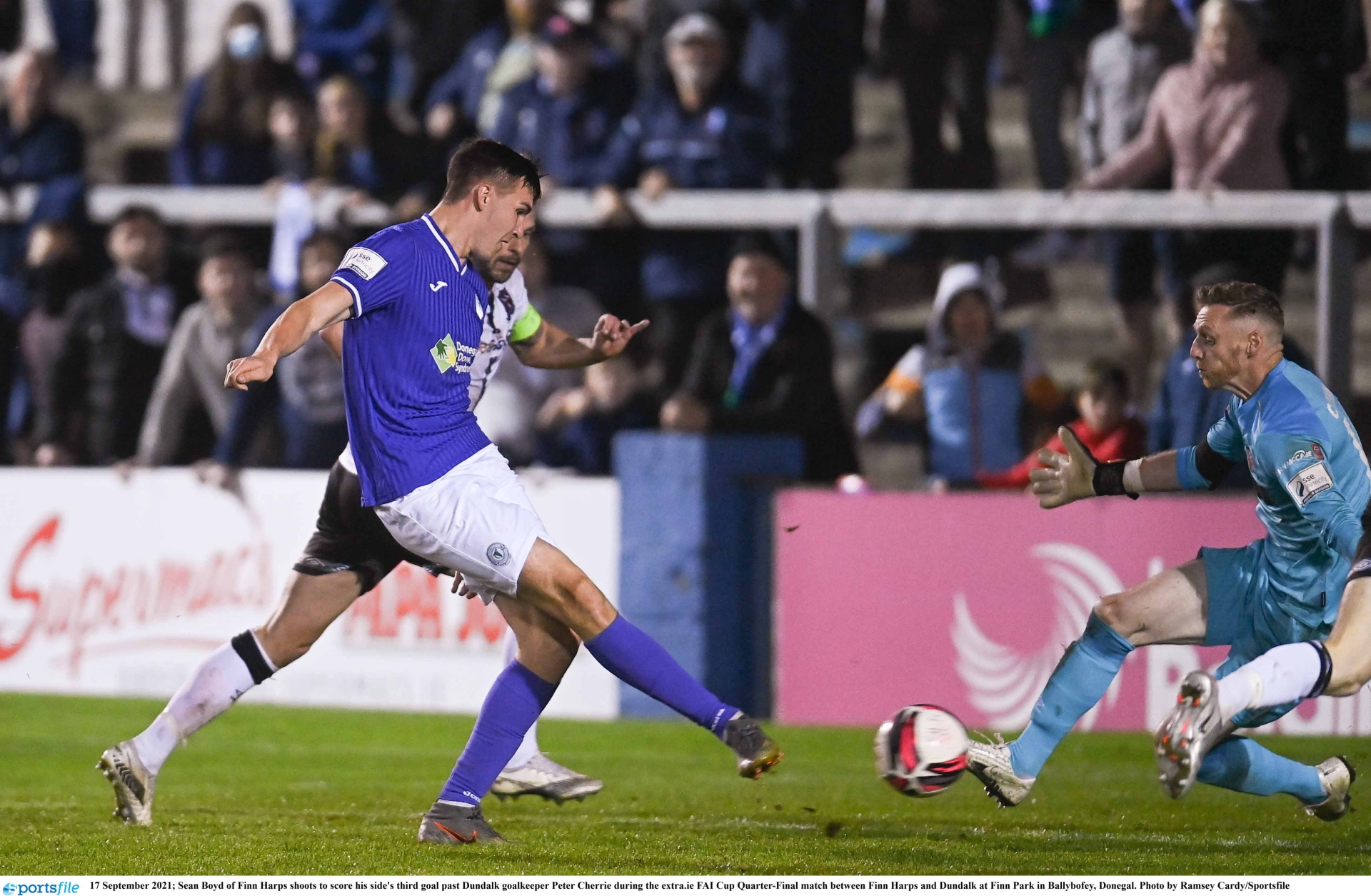 Harps threw caution to the wind in the second half and Ryan Rainey’s deflected cross on 52 minutes deceived Cherrie with Owolabi in attendance and Andy Boyle cleared. At the other end, McGinley did well to turn away a Murray free-kick from the angle of the penalty area.

With Harps lining out for the third time in eight days, they began to look weary and Dundalk were good value for another goal and got it when Murray’s cross to Hoban was on a plate for 3-1 on 65 minutes. Four minutes from time Sean Boyd’s header from a Karl O’Sullivan gave the Donegal side hope and urged on by a boisterous home support, almost grabbed an unlikely equaliser with Boyd denied by a last-ditch block from Daniel Cleary.

Then, in injury time, Kosovar Sadiki somehow hooked over the Dunalk crossbar in the depth of injury from six yards out. However, with the four minutes up, Boyd got on the end of a Rainey ball in to seal a replay, which will take place at Oriel Park on Tuesday night.