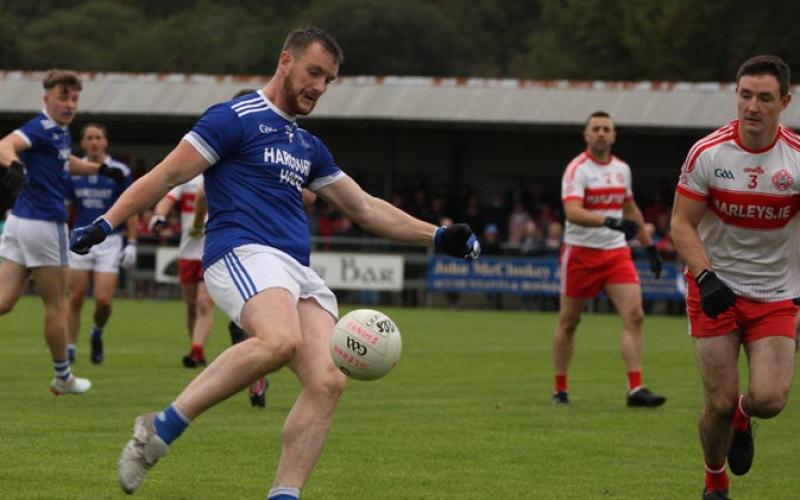 Naomh Conaill opened their Donegal SFC campaign with a workmanlike victory over a Glenfin side who were in the contest until the very end.

It came down to a bit of a third quarter purple patch from the side in possession of the Dr Maguire to come through. With the scores tied at 0-6 to 0-6 at half-time, Charles McGuinness shot Naomh Conaill one up but with scores still difficult to come by it wasn’t until the 40th minute that Glenfin’s resistance was finally broken.

Dermot Molloy, Ethan O’Donnell, Jeaic Mac Ceallabhuí and McGuinness all scored on the spin to push Naomh Conaill’s advantage out to 0-11 to 0-6 with only 43 on the clock.

Glenfin goalkeeper Andrew Walsh saved well with his feet after Brendan McDyer had chased down a seemingly lost cause to set up substitute Seamus Corcoran to drive at goal.

Mark McGinty’s Glenfin side had a close-up view of Naomh Conaill in each of the last two championships and certainly looked well-drilled, very patient in possession and but for Stephen McGrath in goal could’ve had a first half goal or two.

Firstly, on 13 minutes Ciaran Brady got in and McGrath tipped over the crossbar and then John Harkin forced the Naomh Conaill netminder once more content enough to tap over and concede the point.

Glenfin were 0-4 to 0-3 up at the first water break with Gerard Ward and Brady heavily involved, with Molloy’s two scores late in the half and a 45 from Ciaran Thompson edging the home team one up at 0-6 to 0-5. However Jason Morrow levelled it up at half-time.

Naomh Conaill didn’t score in the last 19 minutes and Glenfin, who were well disciplined, were perhaps caught in their shells for a spell. However, Gerard Ward did the score the last couple of points, both from frees, to take it down to three. It was closer than Martin Regan’s team might’ve liked. A win though, is a win.

Aodh Ruadh, the intermediate champions, welcome Naomh Conaill next weekend, while Glenfin are at home to St Naul’s.