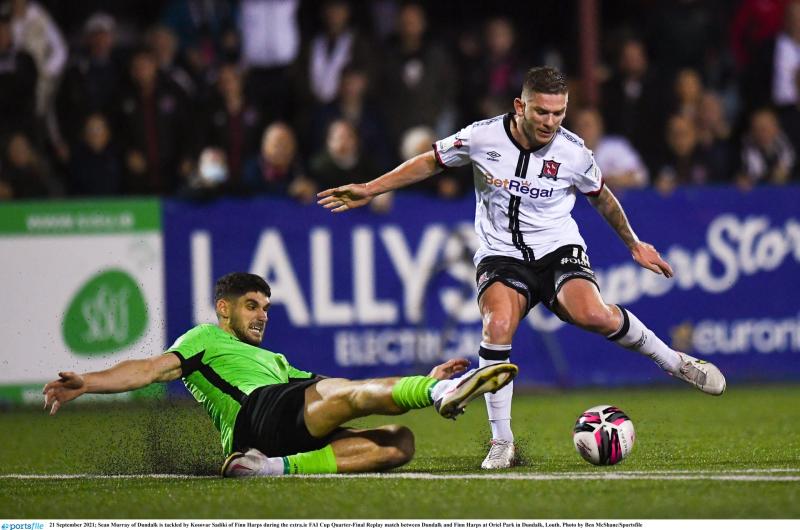 Sean Murray of Dundalk is tackled by Kosovar Sadiki of Finn Harps during the extra.ie FAI Cup quarter-final replay at Oriel Park

Sean Boyd put Ollie Horgan’s side in front early on before a Dundalk equaliser came courtesy of Sean Murray before half-time. That’s the way it stayed until seven minutes into extra-time when Pat Hoban scored from the penalty spot after Dave Webster was adjudged to have taken down Sami Ben Amar.

Michael Duffy then curled in a spectacular free-kick in the last minute of the first period for 3-1. After an uncertain start, Dundalk had improved the longer the match went on.

It means Dundalk, the defending champions, are in the hat with Bohemians, St Patrick’s Athletic and Waterford, having won three and lost three of their Aviva Stadium six-in-a-row.

A titanic 3-3 draw on Friday made for a replay, with Boyd scoring twice late on - firstly with an 84th minute header and then taking down a searching Ryan Rainey ball before steering home to the delight of Finn Park five minutes into injury time.

Vinny Perth, the Dundalk manager, was faced with a coronavirus outbreak, which was reported to have ruled out four or five players. He showed two changes from his starting line-up from Ballybofey with Ben Amar and Mayowa Animasahun for Andy Boyle and Sam Stanton. 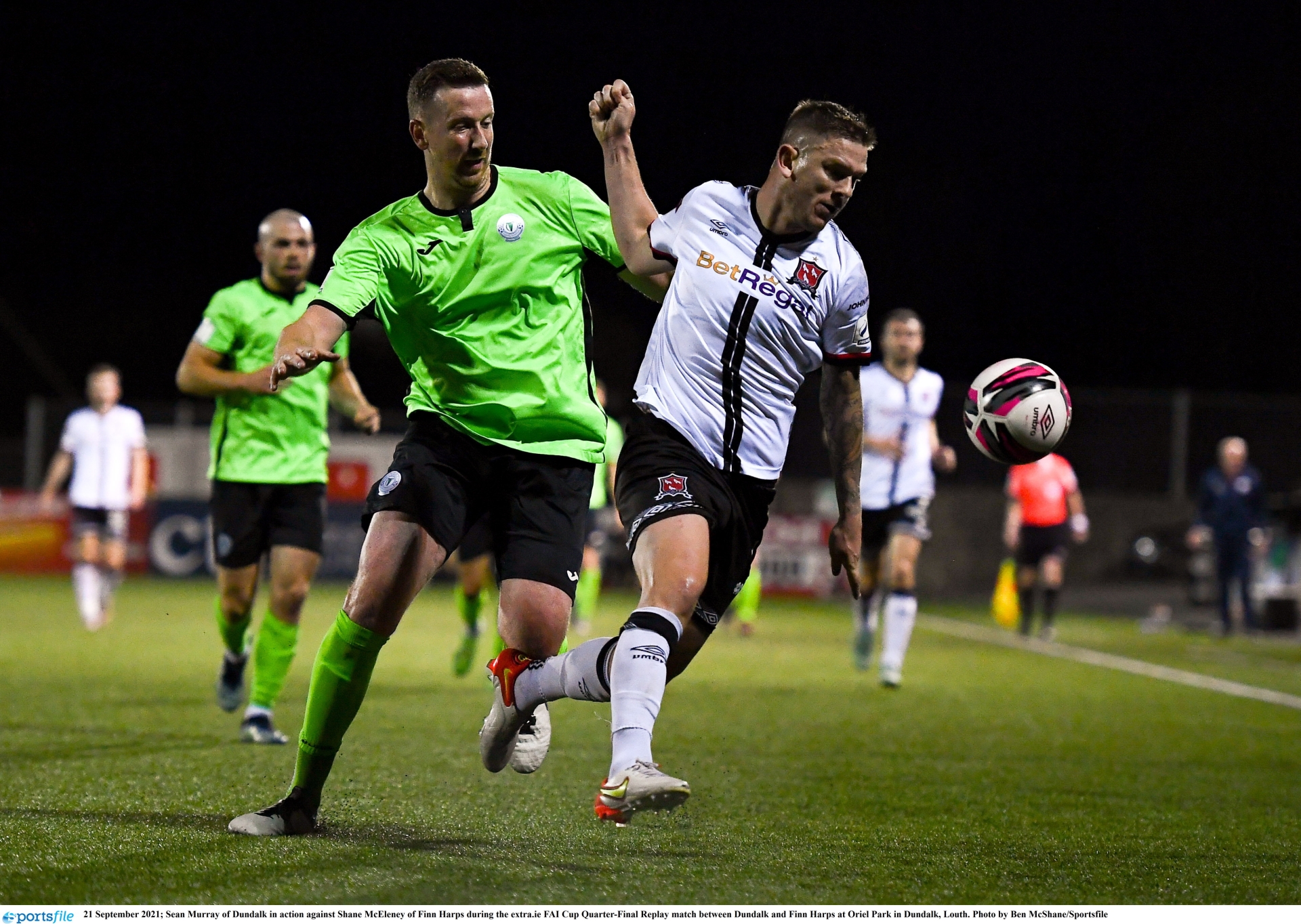 Harps, meanwhile, had to plan without the suspended Mark Anthony McGinley and Jordan Mustoe, while Johnny Dunleavy sat on the bench. In came Gerard Doherty, Shane McEleney and Boyd.

Boyd was at it again within six minutes with an opening goal that wasn’t too dissimilar to his dramatic late equaliser on Friday night.
Rainey’s diagonal ball from just inside the Dundalk half was controlled brilliantly by the Dubliner, who let the ball hop in his path, before unleashing a terrific half-volley past Peter Cherrie in the sixth minute.

The silence, bar a small pocket of Harps supporters away in the corner, could be heard as far away as the Hill of Faughart.

With his tail up, Boyd tried his luck from a free-kick from all of 30 yards on 14 minutes, forcing Cherrie to save. Harps were playing with confidence, keeping the ball on the deck with Boyd and Tunde Owolabi linking well with the midfield.

Dundalk’s recent travails - somehow they are still in the relegation play-off position in the SSE Airtricity League despite having a squad capable of winning the title - made for a nervous energy around old Oriel. There was an anxiety rolling in from the stands; the type of noise you usually only hear when Mayo are playing Gaelic football.

Barry McNamee popped from distance and Cherrie saved while Owolabi, furrowing alone on this occasion, held up play and went the long way round before firing over.

Although the collective isn’t functioning to capacity, Dundalk’s various individuals are still there with the ability to pull a rabbit from the hat. One explosive run from Duffy that came to nothing showed a glimpse of possibility, running against an already yellow-carded Ethan Boyle.

Although looking jittery at the back, where they were cobbled together, Dundalk were growing into the contest from an attacking perspective.

Six minutes before the interval, Murray stole in to poke an equaliser past Doherty, who stretched to the last, into the bottom corner with Hoban having made the opening after hooking the ball over his own head. It was 1-1 at half-time. All to play for, as they say.

Duffy on the left was giving Harps some restless moments, getting inside Boyle on 56 minutes and getting an eye on goal as he cut inside into the penalty area only for McNamee to come and clear. 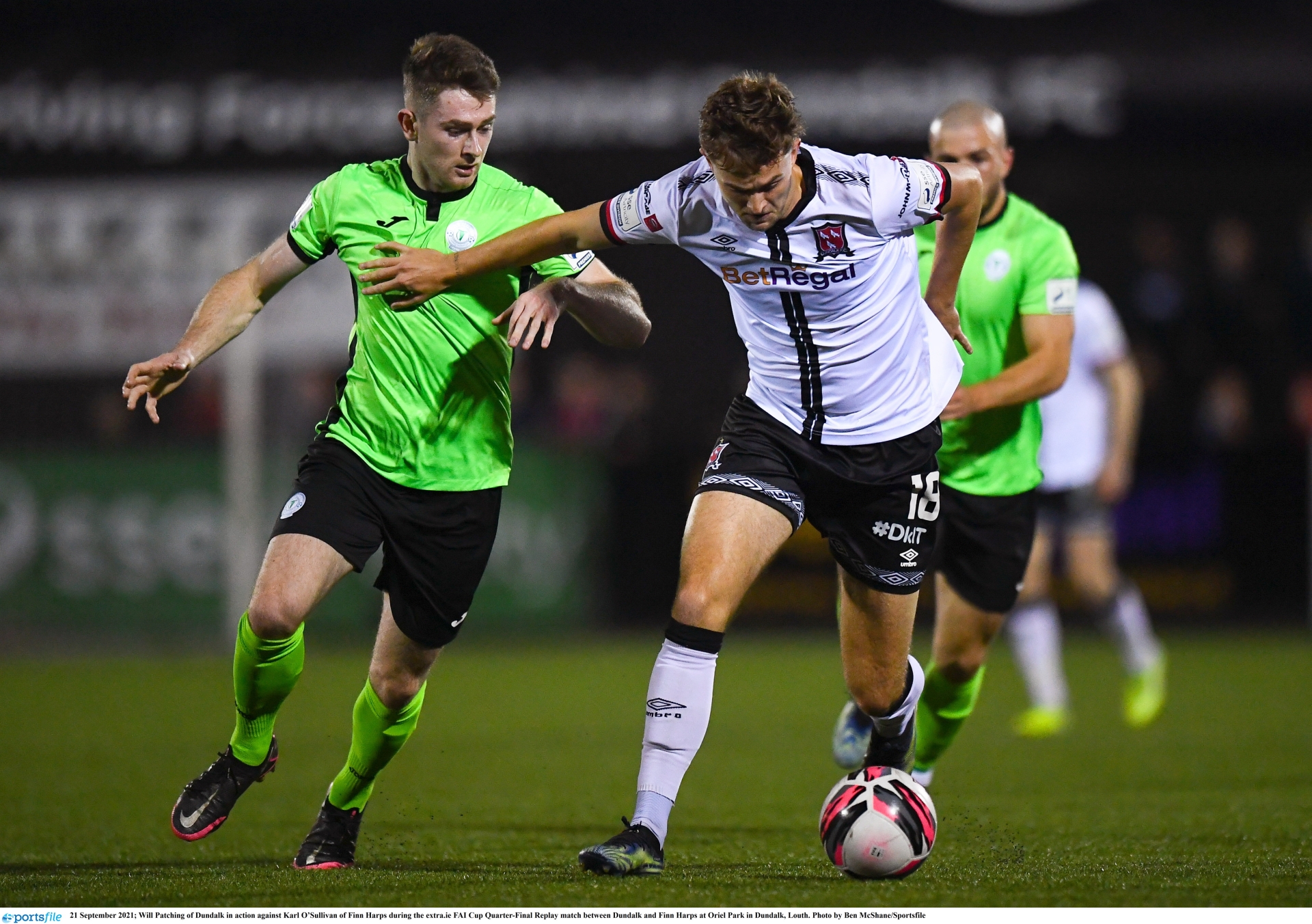 Webster, from the edge of the penalty area with a half-hit shot, made Cherrie go down to save on the hour-mark as Dundalk failed to get sufficient purchase on clearing a corner kick. On 62 minutes, Boyd headed off the post from a corner as Cherrie did enough to stop Owolabi’s follow-up.

Again, it showed Dundalk’s defensive frailties, although going forward Murray and particularly Duffy brought life to the famous Shed, the home of the most vocal of Dundalk’s following. They howled for a foul by Kosavar Sadiki on Murray, who broke with intent, although the Harps defender’s tackle was perfect.

The longer it went on, chances became more infrequent, with both sets up players probably thinking that any mistake might be their last.

The sides were still level at the end of almost 93 minutes. Extra-time, which opened with Hoban fashioning a chance  for himself from Greg Sloggett’s crossfield pass, made Doherty stoop low. Hoban was coming to life and went close again - perhaps he should’ve gone closer - when he headed over a fine cross from Murray four minutes into extra-time.

Hoban made no mistake from 12 yards though when match referee Ben Connolly pointed to the spot with Webster outfoxed by Ben Amar and Dundalk were in front. And the lead was doubled when Duffy scored the third from a textbook free-kick. 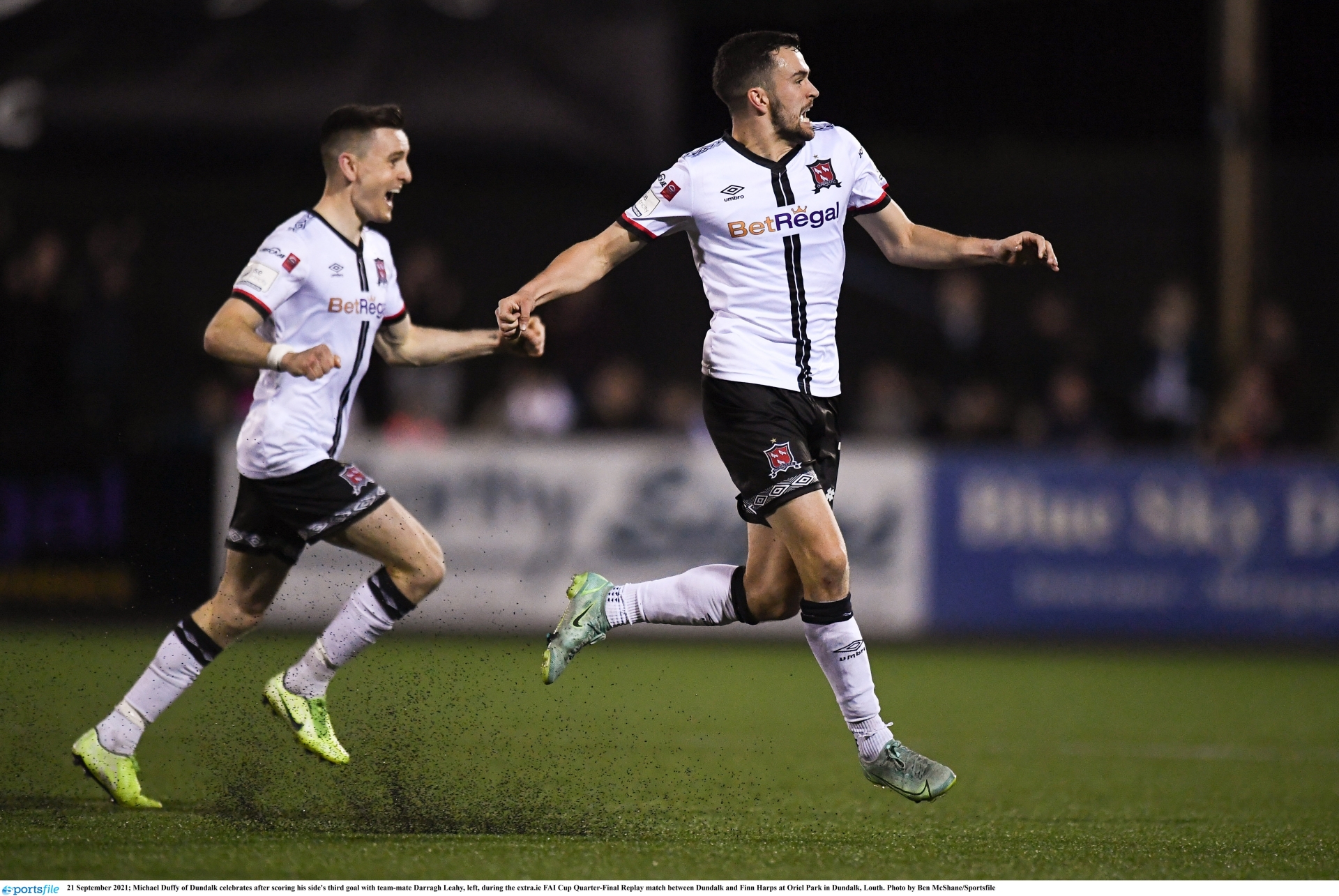