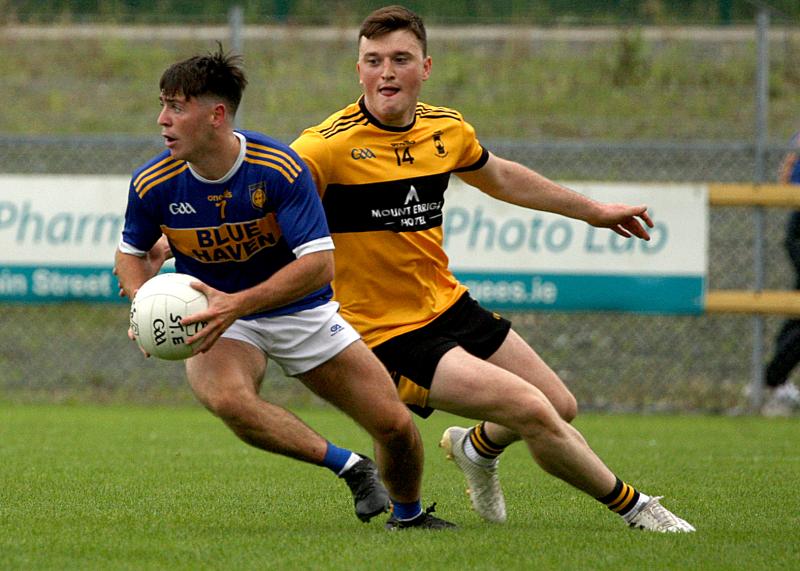 The opening round of the Donegal SFC was played over the last two weekends and we've put our heads together here to choose which 15 players stood out.

1 - Christopher Sweeney (Gaoth Dobhair)
It’s not often a goalkeeper in his opening championship outing of the season is faced with three penalties. That’s exactly what happened in Magheragallon, though, with Sweeney saved two of three Milford penalties.

2 - Eddie Lynch (Aodh Ruadh)
Has been one of the mainstays of the team, not just against Four Masters on Sunday last. Not overly big in stature, his ability to read the game to the fore in every game. Against Four Masters he was mature, cutting down angles and giving very few opportunities.

3 - John Harkin (Glenfin)
In the end, they left Naomh Conaill with nothing but can take huge heart. Harkin was employed at full-back and did well defensively. With his team, particularly in the first half, very assured he joined the attack with menace and would’ve had a goal but not for Stephen McGrath.

4 - Anthony Gallagher (St Eunan’s)
The inclusion of Gallagher to face Kilcar was considered a surprise to many, especially seeing he was to shackle Patrick McBrearty, who scored 1-7, although only one of those points came from play. Gallagher did well and even scored a point himself. Unlucky to be replaced.

5 - Thomas White (St Naul’s)
A beautifully balanced young player who is just out of minors. He helped set up the crucial early goal for Michael Coughlan and weighed in with two points. Very versatile but last Sunday he was a very effective and commanding wing back, breaking at pace and causing havoc to Termon every time he did.

6 - Andrew McClean (Kilcar)
McClean was handed the enviable task of trying to shackle the St Eunan’s Niall O’Donnell. And although O’Donnell certainly had his moments as St Eunan’s were the driving force in the first half, McClean stuck at his task at centre-back to help the Towney-based side and contributed a point himself.

7 - Hugh O’Donnell (St Michael’s)
Went forward from wing-back to kick three quick points in the middle of the second quarter to bring St Michael’s back into it against MacCumhaill’s. And he did not neglect his defensive duties either and managed to turnover MacCumhaills attacks on a number of occasions in a top class performance.

8 - Nathan Boyle (Aodh Ruadh)
Scoring 1-6 from midfield is the sort of dream return for any player and especially for any team manager. Nathan Boyle was front and centre of everything that was good about Aodh Ruadh against Four Masters. All of his scores were top drawer and from distance.

9 - Conor Classon (Ardara)
When the game in Pearse Park was up for grabs in the final 10 minutes Conor Classon showed the guile to turn the ball over in midfield to set Ardara on their way for the match-winning goal from Stefan Boyle against Bundoran. Classon’s imprint was on the win with an imposing performance.

10 - Matthew McClean (Kilcar)
Arguably the stand-out performer of the entire first series, McClean was the one Kilcar player who stood out in an abject first half in Letterkenny. In all, he would score five points from play and his side grappled for control of the contest, demonstrating his abilities particularly with a couple of boomers off either foot.

11 - Michael Murphy (Glenswilly)
It has all been said in so many different ways over the years. Massive impact on Donegal and an even bigger influence at club level as he showed against Killybegs with a sublime jab lift off the ground and then struck a superb point from right on the sideline. Injured this year but he looks to be making a good recovery.

12 - Odhran MacNiallais (Gaoth Dobhair)
MacNiallais hit seven points as Gaoth Dobhair strolled against Milford, with all but one of those coming from play. The county forward dictated play as he drifted across the half-forward line. His speed of thought and good positional sense allowed him to nonchalantly split the Milford posts.

13 - Peadar Mogan (St Naul’s)
Has the ability to run whilst dipping the shoulders and then arcing over points with that trusty left boot. Mogan, for St Naul’s on Sunday, hit two superb points against Termon and was a real threat every time he touched leather and has savage pace as well as the feet of a dancer.

14 - Colm McFadden (St Michael’s)
McFadden only started once for St Michael’s in the All-County Football League and yet at 38 put in a top class showing against MacCumhaill’s, where he kicked 1-6, for Daniel McLaughlin’s side. For his age and many younger, he is in excellent shape and is still a considerable asset for his club.

15 - Cian Mulligan (Gaoth Dobhair)
A goal and four points was a healthy return for Mulligan against Milford last Sunday week. Mulligan's incisive running and his searing pace opened up the Milford defence time after time. All of his 1-4 came from play in a man of the match performance. And his run from deep also paved the way for Gaoth Dobhair’s second goal on that day, which was driven home by Donal Mac Giolla Bride.