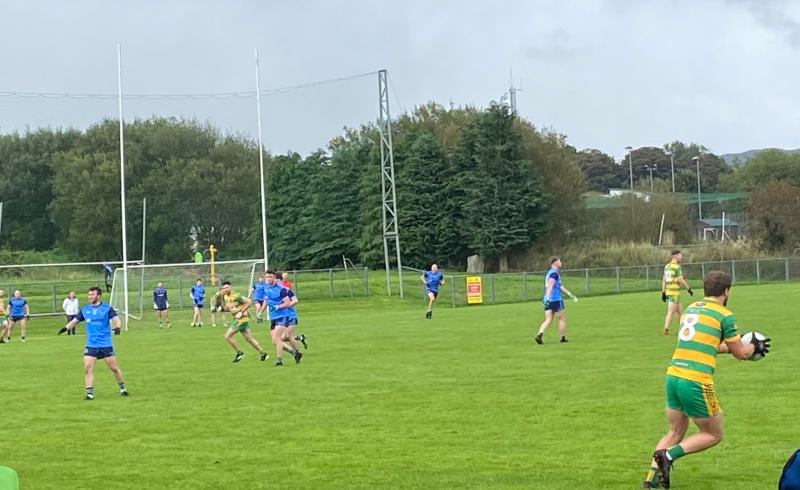 A 66th minute Kane Barrett goal for Milford sealed a dramatic win over Ardara in the second round of fixtures in the Donegal SFC at Moyle View Park this afternoon.

A point down, Milford’s Barrett stood over a free from all of 60 metres in what looked like a last ditch attempt to scrape a draw with his team 1-12 to 0-14 down. Barrett had been kicking well all day but his effort understantly looked to be dropping just a tad short only for it to deflect past Paddy Gallagher off the hands of the outstretched Conor Classon.

Suddenly Milford were ahead and with Barrett and Stefan Boyle pointing at either end in the depths of 10 minutes of injury time, it meant for a home win. CJ Molloy was sent off for a second yellow midway the injury time. Barrett finished off with 1-7.

Milford were three down at half-time, 0-7 to 0-4, but were a different team in the second half with use of an uncertain wind. They kicked five in succession between the start of part two and the 38th minute, to go 0-9 to 0-7 in front.

Tony McNamee, Barrett’s brace and scores from Christopher Barrett and Rory O’Donnell laid the foundations for the turnaround. However, Ardara dug in at a stage in the contest when it looked to be drifting from them and on 43 minutes mustered a goal from Tomás Boyle, who tucked home from close range after CJ Molloy and grasped a Paul Walsh free in a crowded square.

That meant Ardara were back in front, 1-8 to 0-10, although control was difficult to grasp. Dylan Dorrian and Ronan Docherty, who was later black-carded, kept Milford in touch and Gareth Concarr and Tomás Boyle did the same for the visitors. A Concarr point in the 64th minute looked to have won it for Ardara. There was, though, still a chapter or two to pen.

With Ardara not really certain as to their predicament in the Donegal SFC, they’ll be counting the cost of the loss. The Kentucky-based side were victors on matchday one against Bundoran only for the Seasiders to successfully lodge an objection, successfully to the Donegal CCC. As things stand the sides were to replay this Wednesday, although Ardara have confirmed an appeal to the Provincial Body.

Today, in changeable conditions at Moyle View, Ardara had whatever breeze there was going and even though they fell behind to an early Docherty point, from then on they dictated the pace of the game.

Paul Walsh with a free and a whopper from distance, Jack Brennan, CJ Molloy, with two, and Tomás Boyle put the visitors 0-6 to 0-2 up by water-break, with Rory O’Donnell Milford’s second scorer.

Ardara lost the influential Paddy McGrath in the second quarter, pulling up with what looked like a hamstring strain. Milford improved and saw Kane Barrett kick a couple of second quarter frees.

The first real sight of goal either side got was two minutes prior to the break, when Ryan McMahon took a smack only for John Ross Molloy to block. Ardara were good value for their 0-7 to 0-4 interval break.

Milford were well-beaten in their opener, 4-21 to 2-6 in Gaoth Dobhair and knew a second loss might need them needing snookers in the last two matches, particularly with this year’s structure having eight teams involved in the relegation play-offs. As it is they’ll await tomorrow’s draw in Towney with optimism and a bit of a spring in their step.