Ed Byrne: Why I resigned as CCC Secretary 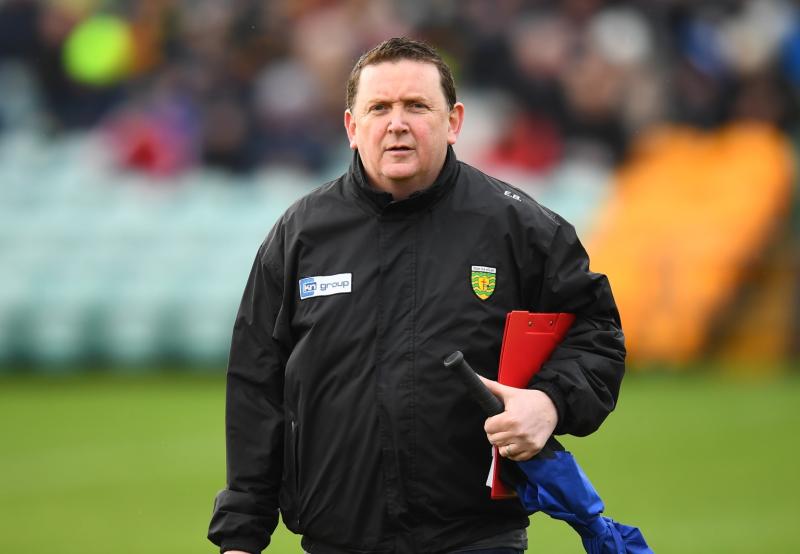 Donegal Competitions' Control Committee (CCC) Secretary Ed Byrne is stepping down from the hot seat of a job he “loved” but one that has become “intolerable”.

The vastly experienced Byrne already told his Executive colleagues of his intentions at a meeting last week and is not for turning despite some requests to reconsider what many regard to be the toughest job in the county. He is due to finish up on Tuesday when all the fixtures will be published.

When asked for the background to his decision, he cited a number of reasons, both personal and public.

Covid, personal family tragedy, a recent road traffic accident and a number of frustrating issues in the county in recent times were the background to his decision.

And he took full responsibility for his error in misquoting the date of a year in a rule in relation to Ardara’s appeal to the Ulster Council which he believes strongly resulted in Bundoran’s original objection not being upheld.

Byrne also called for an end to the GAA’s use of what he termed "minor technicalities" in deciding some matters.

“I announced my intention to resign to the Executive last Wednesday night and the CCC on Thursday night and this was before the Ulster Council hearing of Ardara’s appeal,” he said.

“There are a couple of things. It has been a tough two years, with Covid, Emer and I’s stepdaughter Karen passing away and I was involved in a car accident recently in August near Ballyshannon, which means I am out of work.

“I suppose all of those things together and trying to get back to work has been stressful.”

Word came through on Saturday that Ardara had won an appeal to Ulster after they had initially been told to replay their Donegal SFC first round meeting with Bundoran, who objected on the basis of the Pearse Park club having used too many substitutes.

“Fixtures have become very time consuming, and you could spend all day every day at them,” Byrne added. “I knew before the appeal went into the Ulster Council that I had put the wrong year on the appeal.

“I had wrongly quoted the year as 2021 for a rule which should have read 2020. I knew before the appeal went in that the Ulster Council’s hands would be tied.

“But that was written up at 12:30am at night and that will tell you the length of time that you spend at this job, but I take full responsibility for it.”

Byrne and his committee have been hit with a double-whammy of objections from the deferred 2020 Donegal SFC final involving Kilcar and Naomh Conaill and the most recent matter in this year’s competition between Bundoran and Ardara. He has no problem with the principle of objections.

“The objection is there for a reason and people should have the right to object it is a basic principle. But every objection is a learning curve for the next one, so I don’t mind them at all.

“But the Bundoran objection did not fail, it was the wrong date on the documents that caused it to fail and everything else was in order. What I do mind is people who use rules to get off on technicalities generally.

He added: “Officials are supposed to know the rules and I made a mistake and I know I would not have made that mistake if other things were in place. So, to me there was only one choice to make at that stage and that was to consider my position.

“I allowed too many other things in the CCC to get on top of me but when you spend eight to 10 hours a day looking at fixtures and problems, official problems then mistakes can happen. We are all only human.”

Byrne has spent 10 years on the CCC, and he had served two years as secretary. He hit out at underage “issues” in the county.

He said: “Referees in the county are a serious problem in many respects. We have a shortage of them and we are running underage games on the same day as senior championship matches.

“It is causing problems in fixtures as some referees are having to do three, maybe four fixtures over the weekend. We are calling off important underage fixtures at the height of summer to accommodate underage county teams.

“Our club U-17’s in the county did not play for seven weeks in the summertime without their county players. In Killybegs our players were to be in Muff at U-17 level on Saturday. Our senior team coach John Cunningham is leaving this game today (the senior championship match against Milford on Sunday) to go to our U-15s who are playing in Naomh Brid.

“County underage players don’t play for their clubs during the summer because of welfare issues but the club player is expected to play.

“Why is it ok for club players to be treated like that when you have elitism at U-17? That needs to be addressed. And for the first time ever we are seeing our senior championship being demeaned by putting on underage fixtures on the same day as the senior championship.

“Also, the standard of refereeing at the minute could be much better. The vast majority of our referees are good and doing their very best, but I know of a tiny minority of officials who are not treating players with the respect they deserve.

“Some of them tell players to shut their mouths, and if it is not acceptable for officials to be disrespected, then the same applies the other way as it is ‘Give Respect Get Respect.’

“It is happening and I am hearing it from club managers and club officers and of course the same applies to players, managers and let’s not forget spectators who can be very volatile at times.

“It is very frustrating at present for players and managers as you can’t question and ask what was that free for as you are liable to get a card in some instances”.

On the plus side he says the CCC Secretary’s job is a “great job and a very enjoyable job”.

Byrne added: “You would not take on the job if you didn’t love it and for 95 per cent it is grand but in recent weeks, for me, it has become intolerable”.