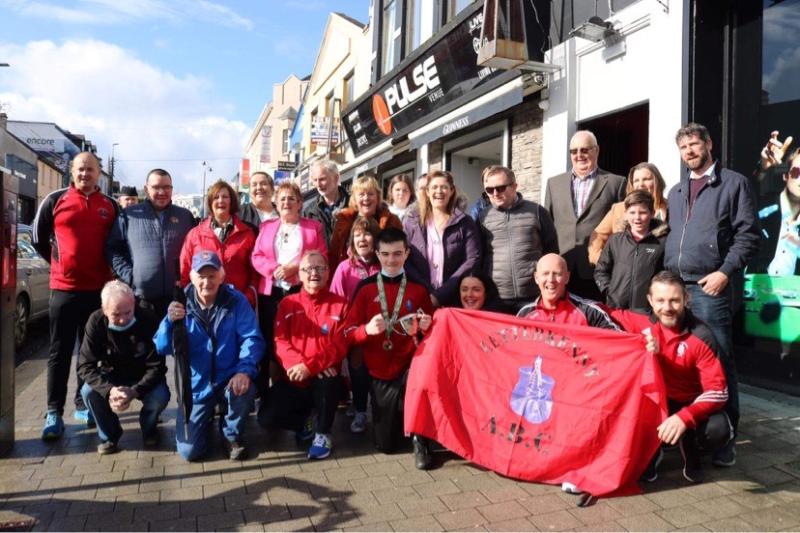 Paddy McShane is welcomed back to Letterkenny on Sunday. Photo Stephen Doherty

Paddy McShane returned to Letterkenny to hero’s acclaim on Sunday following his victory in the Irish National Elite Boxing Championships with plenty to look back on and even more to look forward to.

McShane, 18 then and 19 now, won a split decision 3-2 in the 51kg flyweight final on Saturday evening at the National Stadium against Paudraic Downey from the St John Bosco club in Antrim.

Coached by his father Rory, McShane is the first national elite champion from Letterkenny ABC since Eamonn Coyle won the super-heavyweight crown 39 year ago.

“I really appreciate everyone coming out and the support doesn’t go unnoticed, I’m grateful,” McShane said on Sunday. “When you’re in there you see it different but having watched it back I think I won the fight comfortably.

“The commentators and analysts said the same. It was close fight. He’s been about a long time and he’s a good boxer. I got the victory. It’s been nearly 40 years for Letterkenny and it’s good to bring one back to the town.

“It’s great to bring the trophy back here to my coaches and all my family. I’ve worked for over 10 years for this. I train twice a day, six days a week. I know I deserved it.” 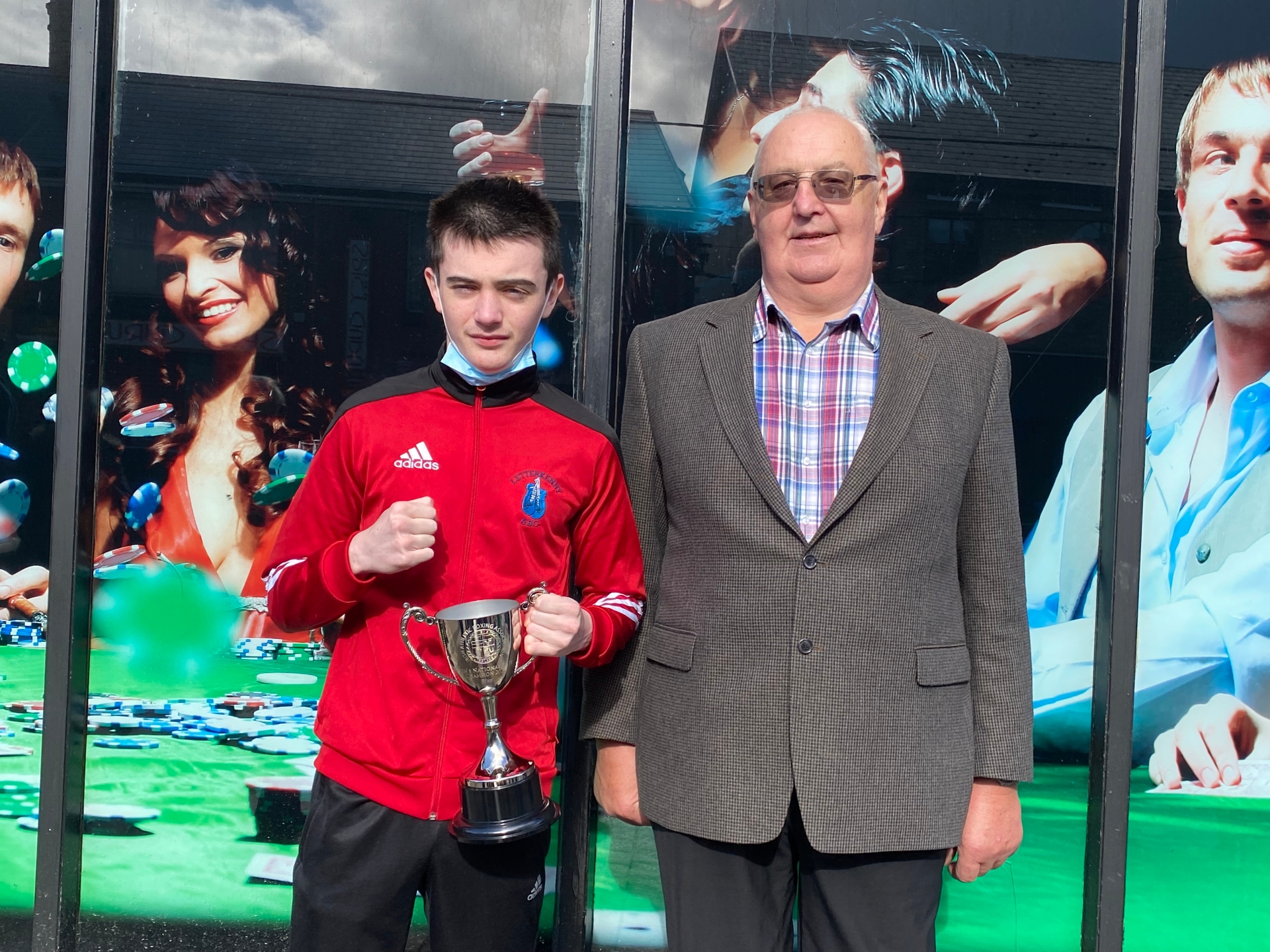 McShane, on Monday, was taking the next step. As national elite champion - only Donegal’s 11th ever and Lettekenny’s second - he began to train with the top brass of the sport in the country.

“I’m invited to the High Performance in Abbotstown now for a training camp for a selection team for the World Championships,” he added. “I’ll be very busy now for the next few weeks. I want to be Olympic champion and I want to be a world champion pro as well.

“I’ve time to learn and to spread my wings. I would hope to follow in Jason Quigley’s footsteps and be a professional amateur at world level and a successful pro and world level too.”

Coach and father Rory was a proud man on Sunday with his son’s achievement, having witnessed the sacrifices first hand since Paddy was a child and first introduced to the sport.

“I’m happy Paddy got his rewards,” Rory McShane said. “He came into the club as a nine-year-old. Every young kid should be into sport. There’s a social element too in meeting people. He’s always put in an effort.

“He’s a respectful young lad and I’m delighted for him. It’s hard to emotionally detach and the weekend was harder as he wasn’t in action for a year and a half. I found it difficult in the corner and James McCarron from Carrigart was there on Saturday night.

“He’s a great friend of mine and can read the fight when I might be getting emotional. It was nerve-racking. Sometimes you don't always get the decision but for my money he won all three rounds. When we heard ‘split decision’ I was panicked a bit if I’m honest.

“I’m proud as a father and proud as a coach. It was difficult in sport with lockdowns, especially with boxing being a close contact sport. There were nerves there. His conditioning was excellent and I was confident in his fitness. This gives an opportunity now to join the Irish squad. He’s now at the highest level in the country.

“Stephen McLaughlin and family, Malachy Price, people like that are brilliant club people. We always had decent boxers here and I’m proud my son took the leap. 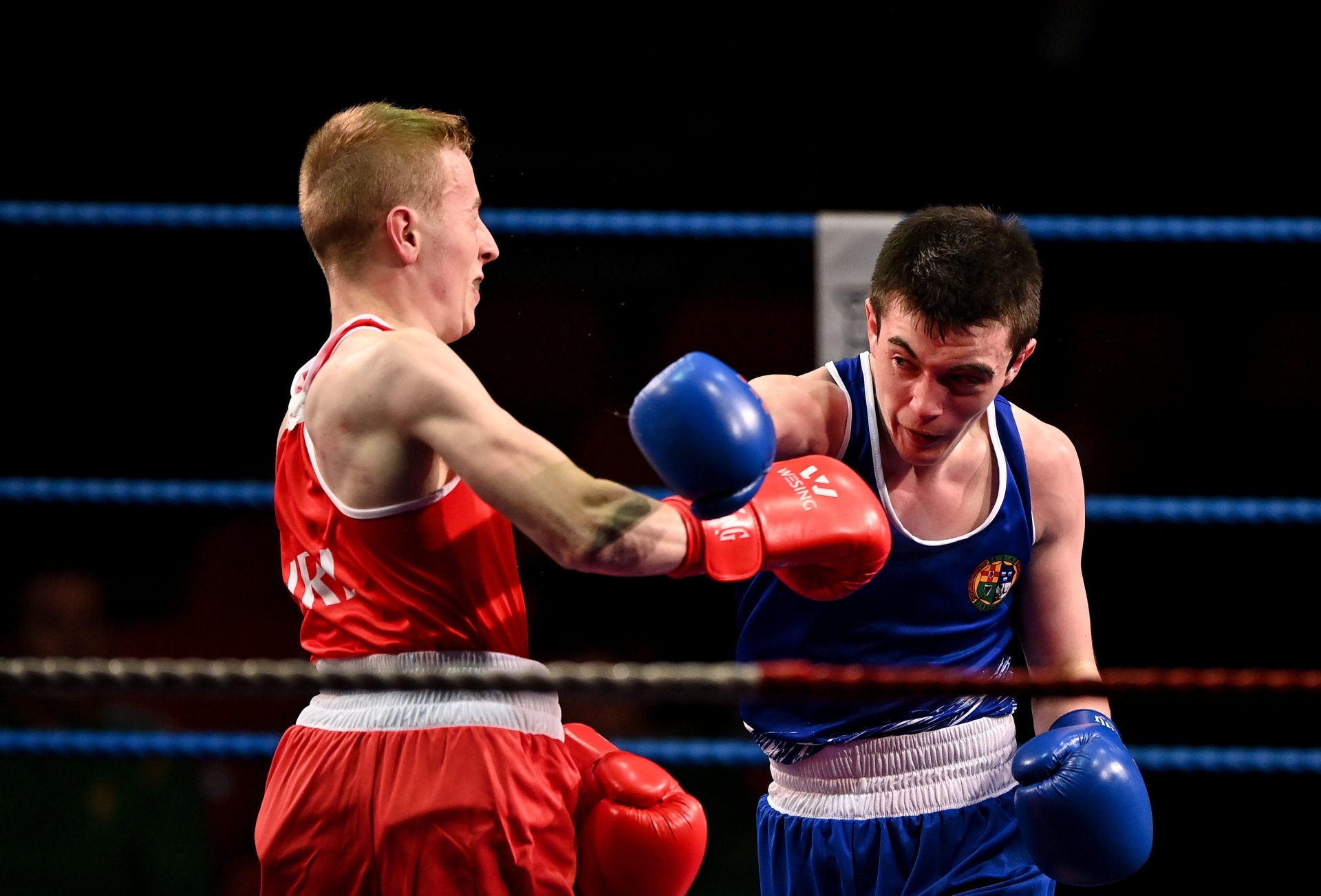 Peter O’Donnell, President of the County Donegal Boxing Board, has an encyclopedic knowledge of the sport and was delighted to see the Letterkenny club get their reward.

“It was a great achievement for Paddy and for the Letterkenny club, who have bridged a 39-year gap,” he said. “The last man was Eamonn Coyle back in 1982. It’s great for the boxers here, the coaches and the officials.

“This will open doors for Paddy, who is off to join the Irish squad now. Hopefully he can be in the mix for the World Championships. You’ll get an influx now and it happens all the time when you get a champion in your district. You’ll get more boys and girls in. Paddy can go a long way and he is a very dedicated boxer. He’s got a good future in the game.”

Coyle, the last Letterkenny member to win an elite crown back in 1982, was more than happy to see McShane join him on the podium.

“It’s a great achievement for a young man and he’s a good operator and I’m sure this will encourage others to get involved in boxing,” Coyle said. “Paddy did very well and he’s a very good technical boxer. I wish I had his skill.”