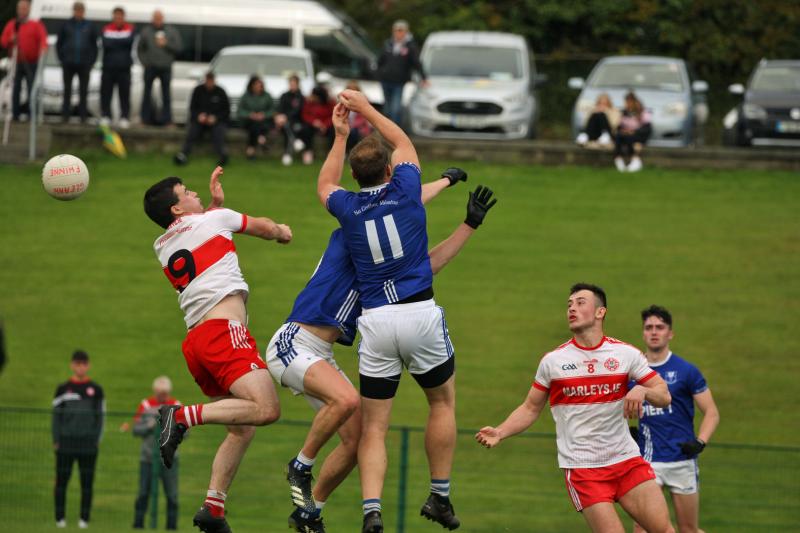 Glenfin knew they would have to win by an almost impossibly big margin to qualify for the Donegal SFC quarter-finals at the lovely Pairc Taobhoige in the looming shade of Alt na Peiste.

And even though they lost the talismanic Frank McGlynn to injury after just seven minutes, they gave it an almighty shot against a Four Masters side who put up a good battle in a wind-assisted first half.

But Kevin Sinclair’s boys could only manage one point in the second half as Glenfin went for bust and just came up short-after leading by 0-8 to 0-5 at the break.

Glenfin had a great chance of a goal in the 56th minute but Karl McGlynn’s screamer flew just past the post.

But, with Sean MacCumhaill’s beating Termon by six points, Glenfin must now settle for a relegation play-off-just like their beaten opponents Four Masters.

But they also have an even bigger prize to look forward to as they play Termon in a play-off to see who goes back up to the All-County Football League Division One - a grade they have not featured in for just over a decade.

As for the very youthful Masters, they played some good football in the opening half and made it very difficult for Glenfin to break them down.

But they were constantly struggling after the break against the physical power and direct running of their opponents for whom Gerard Ward was in fine form from frees and play.

This was a hard- fought affair throughout and tempers frayed somewhat on the line with referee Val Murry giving Glenfin’s Stephen Ward a yellow after he was alerted by linesman Eugene MacHale.

Ward had been taken off earlier and was on the bench when the matter arose.

Four Masters settled swiftly and the lively Shay Travers, who had a very good first half, opened the scoring with a well struck free.

Gerard Ward replied in kind for the home side, who suffered an early blow when McGlynn retired injured.

Jason Morrow stretched the home side’s lead with a very well struck effort but Conor McMonagle replied with a great effort from the side-line to leave just the minimum margin between the sides.

Travers then won a free and converted it and the sides were level at 0-3 each at the first water break.

Glenfin then could have had a goal-but for a brilliant tip over the bar by Masters keeper Martin Cassidy from a point blank pile driver from Shane Carr who was well set up by Karl McGlynn.

Aaron McGlymn stretched the home side’s lead as Travers and Gerard Ward swapped points to leave Glenfin leading by 0-6 to 0-4 by the 23rd minute.

Ward and Travers swapped scores, before Masters keeper Cassidy again made a brilliant save from Ward with a superb diving block for a 45.

Cavan native Ciaran Brady closed out the scoring for the half as Glenfin deservedly led by 0-8 to 0-5 at the break.

Realising that this was not going to be near enough, they upped their game considerably after the break with the breeze and the scores started to flow more freely.

Odhran McGlynn increased Glenfin’s lead and Dylan Kennedy saved on the line from Ciaran to stop a certain third possible goal for the home side.

But it was all Glenfn this half as they went for bust with all their might.

Leo McHugh got Masters’ only score in the half as both they and Glenfin now prepare for the relegation play-offs.