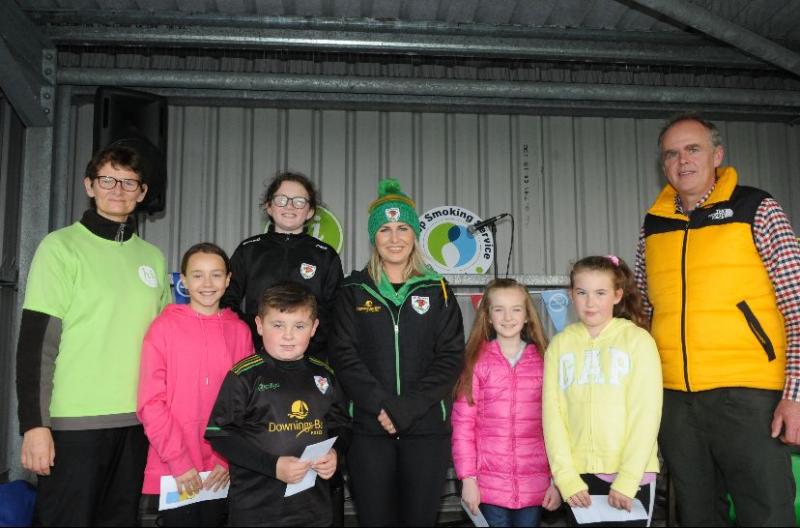 The Smoke Free policy means that smoking tobacco products and vaping (use of e-cigarettes) is not permitted anywhere on the grounds.

Eoin Byrne, Club Chairperson spoke on the day about the importance of this initiative within the club and how he hopes an example is being set for the younger members in the community. He also thanked Board members, Deputy Joe McHugh who spoke on the day, Fiona Boyle from the HSE & Health & Well Being Officer Finghin McClafferty who led the campaign along with Tanya Roberts Browne.

For the past numbers of weeks the club had been running a poster competition within the local National schools. Minor Board Chairperson Tanya Roberts Browne felt it was important for the younger people in the community to be involved with helping promote this launch and highlight the event.

The club also ran a very successful Social Media Campaign on Facebook on Instagram where different members & players gave their thoughts on the Smoke Free initiative.

18 finalists were chosen with the help of Fiona Boyle, Local Hse Stop Smoking Specialist, the competition was then opened to the public vote on social media and this campaign proved very successful in promoting the Smoke Free Club.

Winners were presented on the day by Tanya Roberts Browne who thanked the sponsors for their kind donations.

For anyone interested in quitting tobacco you can contact Fiona Boyle on 0872514790 or Maresa Mc Gettigan on 0860492465 to receive information on any of the 13 free face-to-face clinics throughout Donegal including one in Carrigart Health Centre.

You can also contact QUIT.ie or freephone 1800 201 203 for free support. You have a greater chance of quitting when you get support and use treatments to help you quit.

If you are involved in another GAA Club in Donegal and are interested in Smoke Free Grounds then why not give Fiona or Maresa a call and they will support you with introducing this positive club initiative.